Tax day looms large for many Americans — April 15 was the last date for paying your tax bill, and the day on which the top one percent of Americans, who get 21.0 percent of total income, pay 21.6 percent of total state and federal taxes. So much for a progressive tax system.

But if US taxes are only just barely redistributive, some developing countries have systems that are even more unequal.  They rely much more heavily on sales and trade taxes that are often regressive — taking a larger percentage of poor people’s income than from richer people.  While poorer people tend to receive a larger share of the transfers that governments distribute than their income share, even allowing for that, the net effect of government on poverty income inequality in developing countries can even be to increase it. The extreme poor are net payers to the fiscal system, on average, in Armenia, El Salvador, Ethiopia, Guatemala and Peru. The incidence of poverty after transfers, taxes and subsidies is higher than market income poverty in Armenia, Bolivia, Brazil, El Salvador, Ethiopia, and Guatemala, according to work by CGD’s Nora Lustig and colleagues at the Commitment to Equity (CEQ) project.

That has Nora keen to add language to the Sustainable Development Goals on avoiding immiseration through taxation.  Perhaps a new target 1.6 under Goal One on poverty: “By [2020] to ensure that government tax and transfer programs do not reduce the consumable income (income after net direct and consumption taxes) of the poor”?

But it also raises concern around language in the Addis Financing for Development draft on Domestic Resource Mobilization:  “Countries with government revenue below 20 per cent of GDP agree to progressively increase tax revenues, with the aim of halving the gap towards 20 percent by 2025, and countries with government revenue above 20 percent of GDP agree to raise tax revenues as appropriate… “ 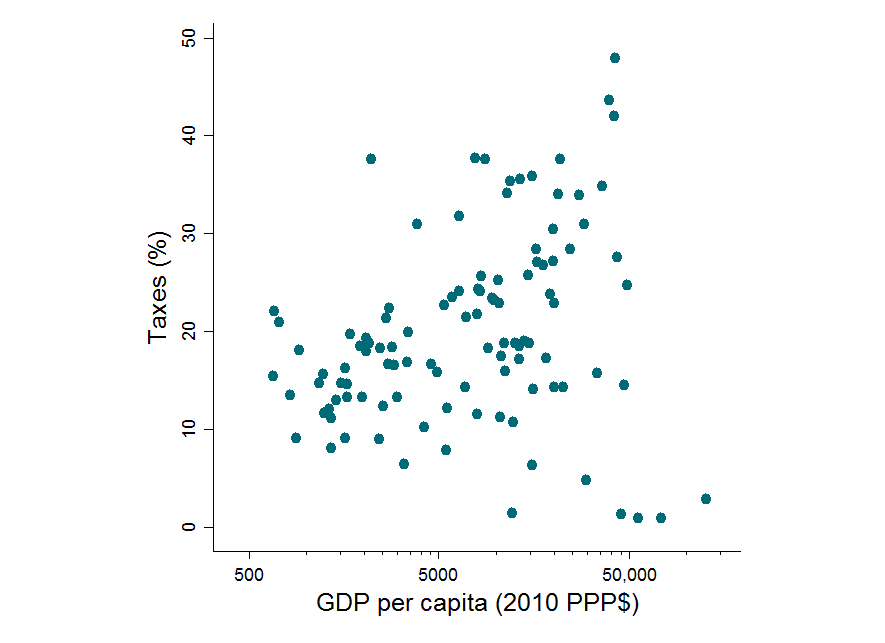 The debate over a national government revenue goal reminds me of the debate over MDG (and SDG) ‘costing studies.’ Proponents note that providing the services required to meet the Goals will cost a lot of money, and argue that most will have to be provided by aid (for the MDGs) or national governments (for the SDGs).  Opponents note that achieving development goals is about much more than more money.  A revenue target risks creating perverse incentives based on poor data, and may end up doing nothing to encourage real progress.

No country which has world class income, health and education outcomes has government expenditures that aren’t many multiples of those in the poorest countries.  And the floor the Addis declaration sets is pretty low: according to IMF data, out of 188 countries with 2015 estimates for government revenues as a percentage of GDP only 31 are below the 20% target.  Only nine countries are significantly below the target, with revenues less than 15% of GDP: the Central African Republic, Nigeria, Guatemala, Bangladesh, Sudan, Iran, Sierra Leone, Costa Rica and the Dominican Republic.  Compared to a number of development goals in the SDGs that it are hard to imagine ever achieving, this target doesn’t seem obscenely ambitious.

Again, cross-country evidence suggests that more developed countries tend to see higher tax revenues as a percentage of GDP.  Using data from the International Center for Tax and Development on taxes to GDP and World Bank income data, Figure One displays the relationship between the two using all countries with non-zero tax reports.  The four outliers with very low tax and very high incomes are the United Arab Emirates, Saudi Arabia, Kuwait and Qatar.    The SDGs call for seven percent GDP growth in LDCs over the next fifteen years.  Whether as cause, consequence, underlying correlation to some other factor, or a mixture of the three, if that goal is met, the cross-country relationship suggests tax revenues will rise.  (As the note points out, the data here is fairly awful: a sad fact that’s true of all too many indicators used in the draft Addis Accord and the Sustainable Development Goals –better quality data is rightly a central concern of the Addis agenda.)

The key point remains: we only want more tax revenue if it is equitably raised and efficiently spent.  The Addis draft already suggests the importance of fairness in taxation: “while recognizing that optimal tax policy is necessarily reflective of a country’s economic and social situation, we will work to improve the fairness and effectiveness of our tax systems. Our efforts will include broadening the tax base….”  But that language could be considerably strengthened.  I would suggest adding: “…relying less on general value added other indirect taxes that tend to be regressive and more on income taxes alongside ‘sin’ taxes on pollutants, tobacco, alcohol and other harmful consumption.  We will work towards the goal of ensuring that government tax and transfer programs do not reduce the consumable income of those under national poverty lines.”

Developing countries need more revenues if they are to achieve the incredibly ambitious SDG agenda.  And most of those revenues will be domestic.  But if the development goals around equitable development in particular are going to be met, taxation has to be progressive and spending considerably more effective.  Any language on revenue levels should be matched with equally specific and ambitious language in those areas.