Less Heat and More Light: Can We Bring More Facts to the Refugee Discussion?

Europe doesn’t have a refugee crisis; it has a crisis of conscience. With so many fleeing conflict, disasters, and extreme poverty in search of a better life for themselves and their children—and who are likely to continue to arrive in Europe at previously unprecedented rates—this crisis is unlikely to be resolved anytime soon. Europe’s institutions have fallen woefully short in coping with these recent arrivals. Desperate, last-minute deals have been made and more are on the way. Both the EU collectively and individual European governments are struggling to keep up, often in the face of increasing tensions at home. And the World Humanitarian Summit—which seemed in principle to be an ideal opportunity to solve some of these problems—ducked the difficult political issues.

In a year of unprecedented policy focus on migration, any break in the political gridlock has been narrow and reactive, not to mention almost exclusively focused on deportation, resettlement, and obstructing irregular movements. We hope to add some longer-term, quantitative analysis to the outstanding work of our colleagues at the Overseas Development Institute and Oxford Refugee Studies Centre, among others, in pursuit of more practical, evidence-based policy proposals. Our migration team has kicked off a new research program on forced migration to better understand people’s motivation to flee their homes, and the implications this has for the legal migration framework. What space does the current system have to accommodate individuals who do not qualify for formal refugee status?

First, let’s clarify who we are talking about. Much attention has been directed toward differentiating between what many consider to be bona fide refugees and so-called ‘economic migrants’ (we’ll be looking in a later blog post at why this is a false dichotomy). However, both the media and policymakers continue to confuse another set of terms: asylum-seekers and refugees. This is about more than just semantics. Refugees are designated formal protection status by the UNHCR, and the global majority are not in Europe, but rather displaced across Turkey, Pakistan, and Lebanon, among others. The majority of those currently arriving in the EU are seeking asylum; whether potential host countries will grant them the protections of asylum is yet to be determined. The United States Citizenship and Immigration Services makes the distinction very clear: only individuals outside the US can apply for refugee status, while only those who have already arrived on US soil are eligible for asylum.

Asylum-seekers and refugees are distinct but not mutually exclusive groups. Some refugees are unlikely ever to seek asylum, for example, those who have lived in Kenya’s Dadaab camp for decades. Some asylum-seekers do not typically claim refugee status: one example is Eritreans fleeing forced conscription directly to Europe. However, it is possible to be both a refugee and an asylum seeker. For instance, Syrians previously resident in Jordan’s Zaatari camp are now seeking protection in Europe. It is also important to remember that the majority of people affected by crises are neither refugees nor asylum-seekers, but rather displaced inside their home country. 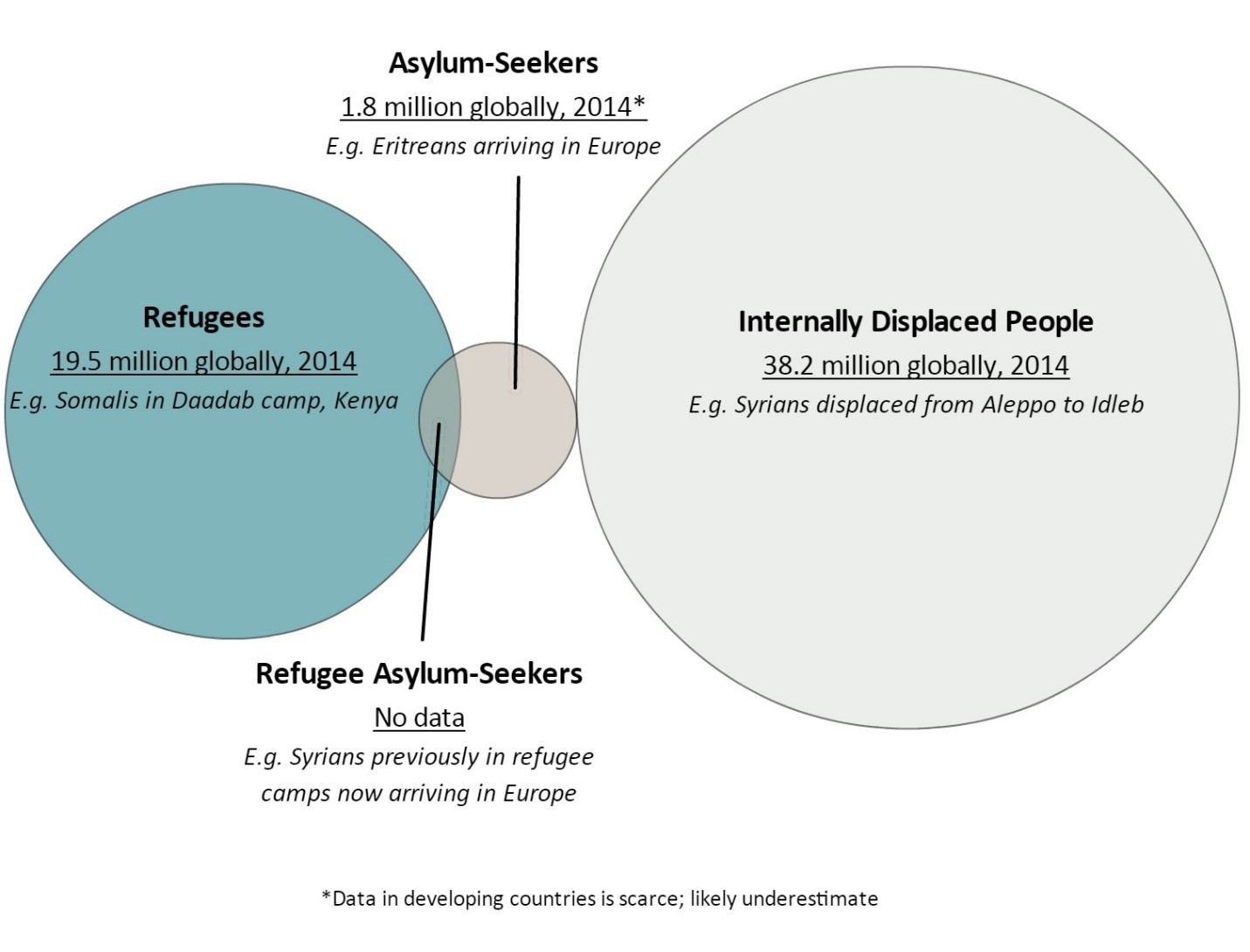 These two groups face different sets of constraints, on different timelines, supported by different actors—all of which are determined by different policy institutions. Consider Syrian asylum-seekers in Germany. The media says Germany accepted one million Syrian refugees in 2015. In actuality, just over one million people in total registered as asylum seekers in Germany last year. Approximately 40% of these were Syrians. Of this group, only 162,510 actually filed asylum applications. 101,442 decisions on Syrian asylum applications were completed during the year: all were positive. This is only 10% of the commonly-accepted number, not to mention an entirely different population from the nearly 4.5 million Syrian refugees residing in and out of camps in Turkey, Lebanon, and Jordan.  In addition to these asylum seekers, Germany has also pledged to resettle 20,000 Syrian refugees directly from the region. 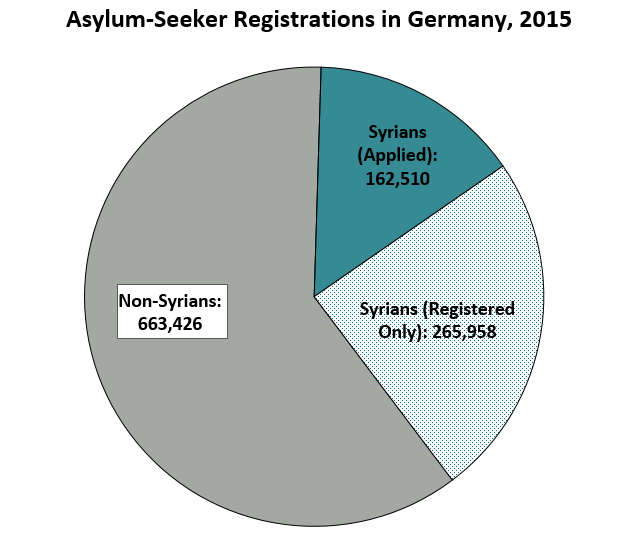 It is unclear what will happen to the 265,958 Syrians who registered as asylum seekers but did not file a formal application for asylum in 2015. Some may have still been waiting for an appointment with immigration authorities. In fact, the end of the year saw a 300,000-application backlog. Others may have moved on to other destinations. It is also possible that some remain in Germany in irregular status (i.e., they state intent to seek asylum but do not submit a formal application). Some of these asylum registrants may previously have been designated as refugees (in UNHCR camps or by third countries such as Turkey), while some may have fled directly to Europe in search of protection.

The discrepancy between these numbers has real implications for both public opinion and policy. Integrating refugees into society will impose much less of a strain on public coffers than commonly overblown numbers suggest (though the net fiscal gain is positive in any circumstance.) The data also raises important questions about asylum-seeker movements – of those who did not remain in Germany, where did they go and what will happen to them? Over the next few weeks we’ll be looking into a number of other misunderstood or underexplored issues related to asylum-seekers in the EU.

German asylum-seeker statistics kindly provided by UNHCR Germany via personal communication. Thanks also to Jeff Crisp, Theo Talbot, Carlos Vargas-Silva, and Alex Betts for feedback on and inspiration for various ideas in this series.