One of the bubblier aspects of the recent enthusiasm for all things blockchain has been the rise in popularity of initial coin offerings (ICOs), also known as token sales. By design, the acronym calls to mind the more traditional fundraising model of initial public offerings (IPOs), in which companies sell equity stakes to investors. With ICOs however, companies use blockchain technology to issue digital assets (usually referred to as tokens or coins) to investors rather than equity stakes. Another key difference—at least for the time being—is that ICOs are virtually unregulated. In fact, many of the advantages ICOs have over more traditional fundraising platforms derive from their unregulated status.

ICOs are a relatively new phenomenon whose use did not take off until the middle of last year. Before 2017, companies had raised less than $300 million through ICOs. By the end of the year however, companies had issued $1.7 billion worth of digital tokens (representing year-on-year growth of 600 percent). While this is a miniscule amount compared to the funding raised globally through IPOs ($188 billion in 2017), and venture capital ($155 billion), the remarkable growth of ICOs looks set to continue, at least until regulators clamp down. 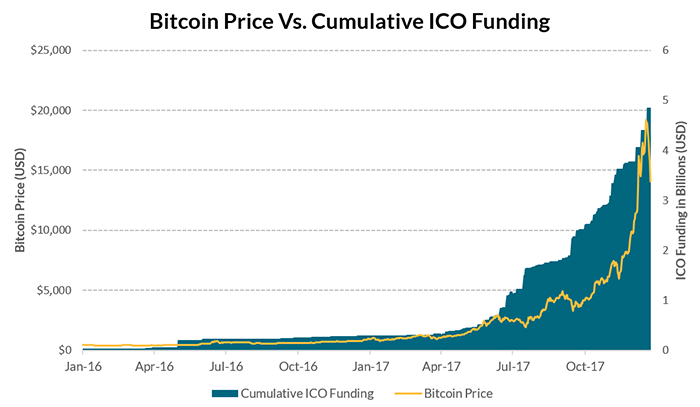 Most of the companies who raise funds through ICOs offer blockchain-based services or products, including several companies that aim to use the technology to support economic development. From the perspective of a start-up, ICOs offer several advantages compared to other funding sources. First, they are much easier and faster to conduct than IPOs because they are not strictly regulated (more on this below). Second, the funds raised through ICOs are non-dilutive, which means that founders can receive money without having to give up an ownership stake of their companies. Finally, tapping funds through an ICO allows companies to take advantage of the hype surrounding blockchain technology and cryptocurrency.

At the moment, many ICO investors don’t appear to be particularly discerning about the tokens they buy, and would-be entrepreneurs have responded by offering up some rather questionable business models. Take for example, Dentacoin, which raised $2.1 million through its ICO in October 2017, selling roughly two trillion tokens priced at a fraction of a cent. Since that time the value of these tokens has increased by 1,913 percent (which means that $1,000 worth of tokens bought in October is now worth roughly $20,000). But what will Dentacoin actually do? The company’s white paper asserts that:

Through creating and implementing the first Blockchain-based platform for trusted dental treatment reviews, the Dentacoin Foundation will allow patients voices to be heard and dentists will have access to up-to-date, extremely valuable market research data and qualified patient feedback.

Dentists can exchange DCN tokens with patients for their reviews, while patients can utilize DCN tokens on various dental services or reserve tokens as an investment tool. In future, the company plans to launch blockchain-based insurance platform and healthcare database.

Skeptics might argue that the ICO market attracts companies with poorly-thought out business models that are unlikely to attract the attention of venture capitalists or investment banks.

Social entrepreneurs get in on the act

There have been at least two ICOs conducted over the last year by start-ups with a social entrepreneurial/economic development focus. In April 2017, Humaniq raised more than $5 million through its ICO. In its white paper, the company outlines its plan to use “blockchain technology combined with biometrics and a focus on mobile technology” to provide financial access to the two billion unbanked. However, the details are fuzzy and, nine months after its ICO, the company’s website does not identify a single project that it is working on (Humaniq did not respond to a request for comment).

Another start-up that aims to use blockchain technology to improve financial access is Moeda, which raised $20 million in its August 2017 ICO (Moeda also did not respond to a request for comment though a PR firm working for the company did). Like Humaniq, Moeda intends to combine blockchain technology with digital ID to help users obtain financing. Per the company’s white paper, it will roll out first in Brazil and “the long-term product vision is to create a lower cost global transparent and network of trust and cooperation like Kiva/Alipay/Paypal solution for the underbanked population of the world.” Once again, however, the details are vague and most of the white paper is frankly incoherent, like the following head-scratching aside on the Nash Equilibrium:

The Nash Equilibrium is a concept of game theory where the optimal outcome of a game is one where no player has an incentive to deviate from his chosen strategy after considering an opponent’s choice. Overall, an individual can receive no incremental benefit from changing actions, assuming other players remain constant in their strategies. MOEDA impact metrics model is develop [sic] to prove that investing and the performance potential of capital can coexist in a sustainable way. Everybody can win, that is no trade-off between well [sic] while doing good.

The point is not to disparage either Moeda or Humaniq. It’s possible that one or both companies can bridge the gap between developing decentralized applications (or “dapps”) and using those applications to solve some of the thorny problems that have left so many outside the formal financial sector (to that end, Moeda reports that it already has five “Pilot Seed Projects” underway and lists IBM, the United Nations Sustainable Development Goals Initiative, and the Green Cross as strategic partners). However, there is nothing in the materials provided by these companies (including white papers, websites, and promotional videos) that suggests this is a likely outcome. This implies that most of the people who bought tokens from them were doing so for speculation rather than impact investment (which could be a problem for a company like Moeda, whose business model appears to rely on having investors spend rather than hold its tokens).

Making sense of the ICO craze

It’s easy to see why so many start-ups are eager to use ICOs: they require less work than traditional funding sources and offer a chance at a big payoff. But what does owning a token actually mean? And why are investors so eager to invest in them?

According to the company Stellar (which offers a platform for ICOs), a “token is a cryptographically secured digital representation of a set of a rights,” which differ depending on a company’s business model. In some cases, token owners are given a right to access a company’s platform, product, or service (such assets are often referred to as “utility tokens”). For example, investors who bought tokens in Filecoin ICO in August 2017 (which raised $257 million in the largest ICO to date) can exchange those tokens to access spare hard drive space from computers on a decentralized storage network. In other cases, token owners are given the right to receive payments aligned to a company’s future earnings These assets are often called “securities tokens” or “tokenized securities.” In either case, investors also can trade their tokens on a secondary market.

One theory about why ICOs have become so popular is that they offer a way for investors who have profited from the rapid appreciation of bitcoin and other virtual currencies a way to re-invest those gains while avoiding taxation. In the United States, virtual currencies are treated as commodities, and trading them into US dollars (or any other fiat currency) is a taxable event. This means that an early investor in bitcoin would have to pay capital gains tax on her gains if she exchanged them for dollars. Because investors can buy tokens using their virtual currencies without first having to exchange into fiat, ICOs offer a convenient way to invest into different assets without incurring a capital gains tax.

This helps to explain the behavior of some US ICO investors, but it’s also true that the boom in ICO activity that began in mid-2017 preceded the most dramatic spikes in the price of bitcoin. In addition, much of the investment in ICOs appears to come from Asia.

The start-ups involved in most of the ICOs conducted to date have been able to side-step the disclosure and investor protection requirements normally associated with securities issuance because regulation has naturally lagged behind technological innovation. This doesn’t mean however, that regulators have been sitting idly by. China banned ICOs in September, followed by Korea later in the month.

In the United States, the Securities and Exchange Commission (SEC) first warned about ICOs in July, and emphasized that “sponsors of offerings conducted through the use of distributed ledger or blockchain technology must comply with the securities laws” and concluded that a specific token sale (the DAO token) was a security under our federal securities law. More recently, SEC Chairman Jay Clayton noted that, as ICOs “are currently operating, there is substantially less investor protection than in our traditional securities markets, with correspondingly greater opportunities for fraud and manipulation.”

And in a strongly worded op-ed published this week in the Wall Street Journal, Clayton and J. Christopher Giancarlo, chairman of the Commodity Futures Trading Commission (CFTC) warned that “the SEC will vigorously pursue those who seek to evade the registration, disclosure, and antifraud requirements of our securities law.”

At some point in 2018, the SEC will almost certainly issue more detailed guidance on the responsibilities of US companies that conduct ICOs. In the meantime, companies of all stripes that consider raising funds through them, including social enterprises, should proceed with caution.