India’s Budget for Health Puts the Ball in States’ Court

The Indian government has sent a clear message with its latest budget: it is now up to the states to take leadership on health and invest more from their own coffers.

On the whole, India’s national budget was an exercise in fiscal consolidation to balance the government’s books. And as the Finance Minister said in his opening remarks, the 14th Finance Commission recommendations, which increased tax devolution to the states, has reduced the government’s headroom to increase expenditure on key social sectors such as health.

Consequently, the allocation for the National Health Mission is essentially flat. The only policy change is an increase in the benefits cap for the National Health Insurance Scheme (Rashtriya Swastha Bima Yojana, or RSBY) from Rs.30,000 (about US$500) to a more reasonable amount of Rs.100,000 (about US$1,500) per family per year. However, details on coverage, benefits package, and payment modalities have not yet been spelled out.

What does this mean for state expenditure?

As highlighted in our report on India’s fiscal architecture, states in India were given more fiscal power to determine their expenditure priorities following the 14th Finance Commission recommendation. And this is a good first step toward encouraging states to put their funds towards their own priorities, particularly underfunded social sectors.

Following our report, our coauthors, Avani Kapur and Vikram Srinivas of Accountability Initiative at the Center for Policy Research in New Delhi, crunched the numbers from available state budget documents for the last fiscal year. They concluded that the share of untied funds have increased significantly in most states (see Figure 1). In states like Bihar, Himachal Pradesh and Kerala, untied funds are now nearly 80 percent, up from around 50-60 percent before the Commission recommendations came into effect in April 2015. 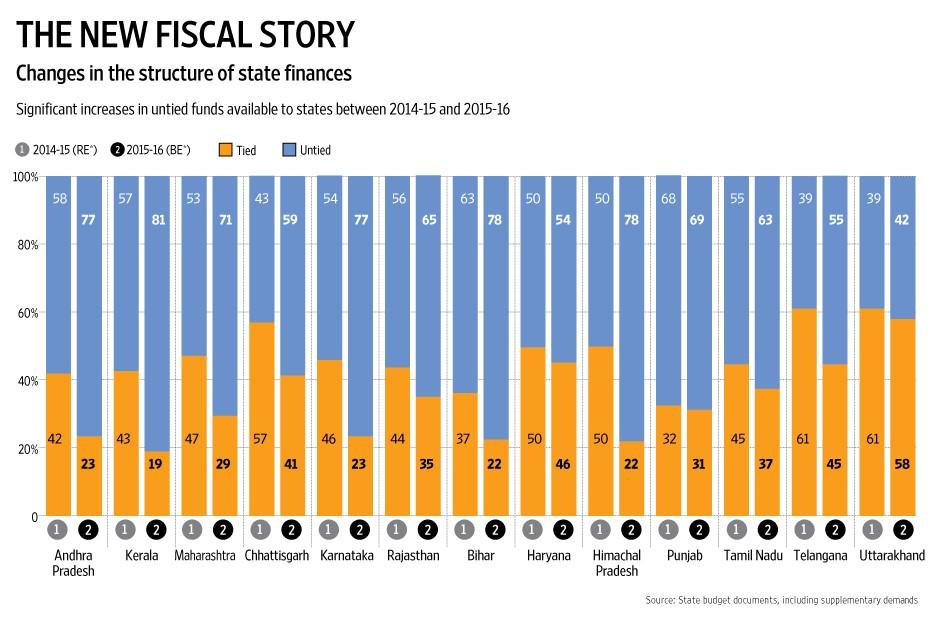 This is good news.

The evidence here is mixed. On one hand, there has been a more than 20 percent increase in social sector allocations in less-developed states such as Chhatisgarh, Jharkhand, Madhya Pradesh, Odisha, and Rajasthan. On the other, the share of social sector expenditure as part of total expenditure is nearly unchanged. This implies that states have indeed put more resources from their untied funds towards social sectors, but it has not been enough to cause a structural shift (see Figure 2). And without a structural shift, we are unlikely to see much improvement in access and quality of social services to tackle high infant mortality, malnutrition, and disease burden, for example. 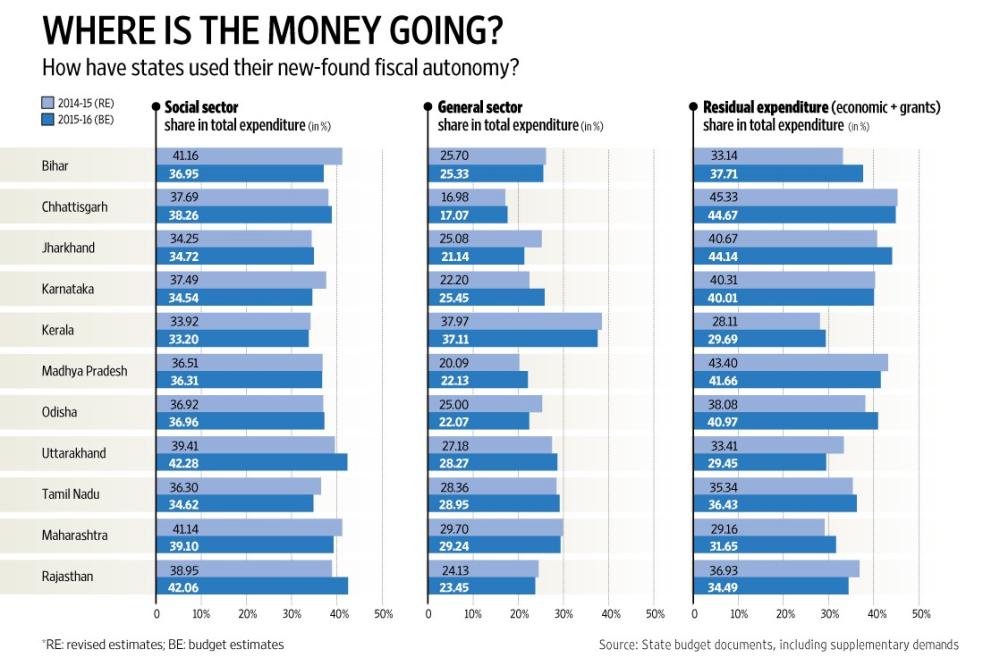 
What does all this mean for health?

India spends a woefully inadequate 1 percent of its GDP on public expenditure for health. Nearly three-quarters of that expenditure comes from states’ own resources, with the rest coming from the central government. It is in this context that the increase in tax devolution assumes significance.

Clearly, the top-down approach to increasing health expenditure has had limited impact, especially in reducing the burden of healthcare costs on the poor. Here’s a prime example: despite the nearly US$25 billion spent through the National Health Mission over the last decade, the proportion of out-of-pocket expenditure has not changed significantly. If states continue this trend of spending too little of their public expenditure on health, their residents will continue to face high out-of-pocket costs for health services—a problem that can keep the already worst-off in poverty.

With greater fiscal autonomy comes greater responsibility, and states need to step up. States must not only begin to move towards a structural shift in spending a greater share on health, but also design and implement policies, programs, and delivery mechanisms that address their populations’ health needs. Still, greater finances are only one part of the solution. Just as important is building the political will to set goals and standards, pool risk and design realistic benefits packages, and prioritize public expenditure on primary care. States have the power to take the lead, learn from each other, and deliver quality and affordable health care for all. The ball is in their court.

Note: Figures are from Kapur, Avani and Vikram Srinivas. 2016. “The State of Social Sector Spending in 15-16.” Live Mint, February 24. http://www.livemint.com/Opinion/1W4L57SRv2b1SWTlz4aBqJ/The-state-of-social-sector-spending-in-1516.html.