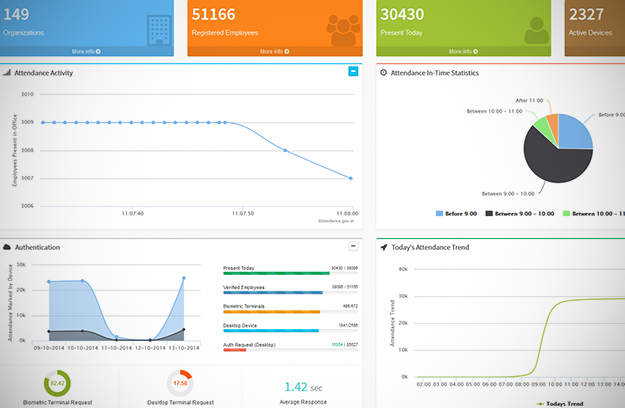 Narendra Modi can now add yet another feather to his technocratic hat.  Only four months since he assumed the role of prime minister, the Indian government has launched a Biometric Attendance System (BAS) using the Aadhaar number provided through the UIDAI. So far some 50,000 central government employees have been registered across 148 organizations in Delhi. Employees are registered using their Aadhaar numbers and log in and out daily. Their attendance rates can be tracked on a dashboard, aggregated across organizations and accessed by anyone on the BAS public domain: Attendance.gov.in.

Biometric government attendance programs to identify ghost employees and eliminate fraud are not unprecedented. They have been implemented in several developing countries, most recently in Kenya, to eliminate ghost workers from the payroll and tighten up purse strings. But the Indian case promises to take this to a new scale and relies on an existing national identification database (which has been ruled by the Supreme Court of India as a strictly voluntary program) while simultaneously making attendance information available on a public database, down to the level of individual employee. One can access the website without any login constraint, search employees by name, find out whether they were at work that day, what time they arrived and left, and how many work days, sick days and vacation days they have taken in the past month. A recent report notes that:   “There are around 50,000 employees registered in the system of which around 32,000 have got verified so far. Of these people, 25,000 were present on October 7. So around 25% of the registered officers didn't make it to the office on Tuesday, something which is unlikely to go down well with the workaholic Prime Minister.”

In a country that is often criticized for having slow, unresponsive and often manual bureaucratic processes, this represents a huge shift in the way the Indian government interacts with its citizens.  It also represents a remarkable step towards public sector accountability although the public reporting at individual level is bound to raise concerns.  Granted, attendance rates are not a silver bullet, but ensuring that employees actually show up has to be at least a start towards rationalization and effectiveness.  India currently ranks only 134th in the overall ease of doing business, a reflection of a regulatory environment that needs work.

The relationship between Modi and the UIDAI started off with some question for Aadhaar’s longevity. One of Modi’s first actions upon taking office was to abolish some parts of the central government, including the Independent Evaluation Office and the Planning Commission which housed UIDAI. Since this initial decision, Modi appears to have reconsidered the value of UIDAI for running an efficient government. UIDAI chairman Nandan Nilekani met with both Modi and Finance Minister Arun Jaitley, successfully convincing them to persist with the Aadhaar effort and to increase its allocation from Rs. 1,550 crores to Rs. 2039 crores. This crucial meeting appears to have pushed the central government to work to ensure that there will not be an overlap between the work of UIDAI and the National Population Register.

If this new government attendance system actually improves responsiveness it may pave the way to cleaning up the lists of beneficiaries for government schemes, including a wide range of benefit programs. Nilekani has made the case that doing this would save India up to Rs. 50,000 crores, which would be an impressive return on the investments in UIDAI. However, as emphasized by the Indian Supreme Court, Aadhaar cannot presently be made mandatory for those entitled to benefits. Some reports suggest that the new government will give legislative backing to the Aadhaar although there is still debate on the matter. If this happens it will open up far more opportunities for its use, but at the same time will push forward the urgency of having in place an adequate legal framework for data privacy.

Digital Payments and Service Delivery, Technology and Development, Biometrics and the ID Revolution