How Well Has ADB Responded to Government Needs during the COVID-19 Crisis?

Among the multilateral development banks, the Asian Development Bank (ADB) stands out for its strong financial support for COVID-19 response relative to its overall lending volume. ADB’s total financial commitments grew 30 percent during the crisis (the most of any regional bank) and it disbursed funds rapidly through a newly created specialized budget support instrument. While ADB has proven to be responsive to government’s general financing needs during the crisis, has ADB’s performance matched the specific needs of the governments and populations facing the crisis in the region? Have the greater volumes of support actually targeted the people, places, and sectors that most need it? In a new policy paper, we take a deep dive into ADB operational data to answer these questions.

ADB was quick off the mark to mobilize resources to deliver assistance for health, thanks to its existing portfolio on regional health cooperation and health security in Southeast Asia. This strong foundation allowed for rapid procurement of personal protective equipment and early dialogue between governments, particularly ministries of health, even before the World Health Organization had declared COVID-19 a pandemic. In the early days of the pandemic, many people envisioned COVID-19 as “contained” within certain parts of Asia. It became clear as time passed that COVID-19 was here to stay, as it spread around the globe. The world, including ADB, took off on a marathon without knowing how long the race would last and what hurdles lay ahead.

ADB supported the poorest countries the most

ADB’s focus has always been on the most poor and vulnerable populations. The COVID-19 response reflected this well, with low-income countries receiving the highest per capita commitments from the bank by far, at $23.5 per capita in 2020, compared to $7 for lower-middle-income countries and $5.5 for upper-middle-income countries. This aligns with the ADB’s aim to prioritize countries classed as “fragile and conflicted-affected situations” and “small island developing states,” two subgroups of particularly vulnerable countries that fall mostly within the low-income country grouping. By channeling a modest, but significant absolute amount of lending to these small, vulnerable states, ADB is able to achieve an “outsized” per capita impact for each dollar it lends, providing the most help to the people that need it the most. In addition, the nature of ADB lending also favors the poorest countries. Grants and concessional loans, though a minor share of ADB lending overall, go disproportionately to the low-income country grouping (89 percent of grants and 60 percent of concessional loans in 2020).

An emphasis on fast-disbursing support for government budget liquidity

ADB allocated a large portion of its crisis financing, $13 billion, through a new budget support instrument, the COVID-19 Pandemic Response Option (CPRO). The CPRO provides quick-disbursing fiscal support for governments to implement countercyclical expenditure programs to mitigate the impacts of the pandemic. The CPRO was created by modifying the conditions under the existing Countercyclical Support Facility, a crisis response modality, and represents a variation on conventional policy-based lending. However, unlike conventional policy-based lending, which requires that countries fulfil defined policy actions prior to disbursement, the CPRO only require evidence of eligibility, based on measures such as alignment with IMF programs. This approach stands in contrast to the World Bank, which has de-emphasized budget support in its crisis financing and has tended toward non-crisis conditionality when it has used budget support.

Health and public sector management saw the largest surges in commitments—137 percent and 242 percent across 2019 to 2020, respectively. This is because nearly all CPROs fall into the ADB sector categorization of public sector management and health. However, to what extent the health and public sector management projects and programs provided more than financing—for example, for knowledge production and policy support—requires further investigation. The purpose of the CPRO was to provide quick financing support during the first phase of the crisis. In line, other sectors, namely transport, saw a drastic fall in commitments—by 61 percent between 2019 and 2020—because infrastructure projects require implementation support in the field. When we break down commitments by quarter, we see that the decrease in transport commitments coincides with a sharp fall in the mobility index, interpreted as associated with lockdowns, which limited construction (Figure 1). At the same time, ADB used the crisis to develop a new transport sector approach fit for a post-COVID world.

ADB’s operations during the crisis period prioritized countries with limited domestic fiscal responses to the pandemic. The IMF’s World Economic Outlook shows low-income countries’ GDP growth fell by 6.95 percent between 2019 and 2020 (Figure 2) and have mobilized the lowest level of fiscal stimulus among all groups, at 1.6 percent of GDP. It is in these countries where ADB and World Bank operations have proved most significant relative to individual country GDP levels. ADB commitments grew by 0.42 percent of GDP in low-income countries, while World Bank commitments grew an average of 2.11 percent of GDP. That said, ADB and World Bank operations are a drop in the bucket of fiscal need that countries are currently facing, and the continued support of ADB and other multilateral development banks will be vital in minimizing the long-lasting economic damage they face going forward. Further, countries will continue to require support for systemic reforms, such as those provided by ADB since 2017 on domestic resource mobilization program, including support for domestic capacity for tax and other revenue collection. 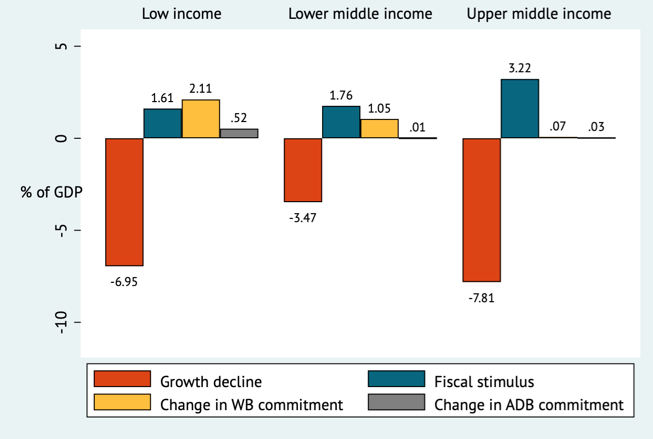 ADB accelerated its analytical and policy advisory services to provide evidence for policymaking, supporting lesson-sharing and up-to-date information tailored to the region. In 2020, ADB produced 352 knowledge products and services, including COVID-19 sector and thematic guidance notes. An online mapping tool on medical supplies was launched, and macroeconomic data and projections were made available. To further the work, ADB has partnered with a wide range of organizations specializing on issues related to COVID-19. ADB also recognized that knowledge was key to advancing longer-term agendas, but that there is still more room to develop a more knowledge-inducive culture.

Our analysis points to a number of areas for policy consideration for ADB management and shareholders. First, while ADB did expand its operations significantly in response to the pandemic, much more is needed to fill fiscal gaps in poor countries and support domestic resource mobilization for the achievement of Sustainable Development Goals. In May 2021, ADB launched a tax hub to enhance domestic resource mobilization and international tax cooperation in recognition of this.

Second, ADB could draw on its knowledge and policy strengths and leverage its analytical, convening, and co-financing powers to attract larger volumes of financing, maximize capital utilization, and provide quality analysis that focus on sustainability, not merely economic growth, for recovery. This would be well-guided by the Knowledge Management Action Plan produced during the pandemic.

Third, ADB can attract more grants. Our analysis shows grants form only 3 percent of the long-term portfolio during the crisis period, with the majority of assistance being non-concessional loans. Urgent remedies to replenish dwindling grant funds are needed, including increasing donor contributions to target the neediest countries and sectors. As crises and disaster are expected to increase with climate change impact projections, grants for crisis management and response and related policies are needed for lower-income countries.

Finally, in line with the corporate strategy, Strategy 2030, ADB’s pandemic response should be used as a springboard for a more comprehensive, future-oriented, and inclusive approach to human development in the Asia Pacific region. By addressing these areas of improvement, which have been clearly uncovered during the COVID-19 crisis, and continuing to prioritize the neediest, ADB can help the region handle the pandemic in the shorter-term and emerge stronger in the longer-term.

With many thanks to Susann Roth and Jiro Tominaga for their insightful comments on this blog and the longer paper.