How Effective Is UK Aid? Assessing the Last 8 Years of Spending

In our new policy paper, we take advantage of the fact that the impact of UK aid is independently assessed by the Independent Commission on Aid Impact (ICAI). Looking back over 8 years and 65 graded assessments, even with a focus on riskier projects, we find that almost 80 percent of UK aid assessed was well spent.

The Quality of UK Aid Spending, 2011–2018: An Analysis of Evaluations by the Independent Commission on Aid Impact

With a spending review on the horizon, HM Treasury will be looking closely at departmental performance and should use ICAI’s findings to shape their allocations. ICAI reviews have assessed over £28bn of aid spend, equivalent to around a third of the UK’s aid budget over the period. Several departments have scored well, but the Foreign and Commonwealth Office (FCO) stands out as a poor performer and the Department for Business, Energy, and Industrial Strategy (BEIS)’s aid portfolio has a mixed record.

ICAI provides extra scrutiny of the aid budget as—unlike other areas of public spend—UK taxpayers do not experience its quality directly. France has announced it will be following the ICAI model as it steps up aid spending, and Sweden has a similar model. It’s clear that ICAI’s reports are a major source of information on aid impact—but so far, no one has drawn together all of its reports.

Figure 1: All graded ICAI reviews (2016 onwards) include this graphic.

ICAI has employed a grading system since it was established (the above version since 2015). We’ve analysed how much spending has been graded and how it was assessed to the end of 2018. This is not necessarily a representative sample of UK aid—ICAI understandably focusses on newer and higher risk spend—and, accordingly, we believe this analysis is somewhat pessimistic.

For most reviews, ICAI considers a particular programme and grades that programme. We’ve looked at each ICAI report, how much spend it covered, which department was responsible for each portion, and then added it up. The results were as follows:

The key takeaways here are

ICAI has focussed most of its reviews (58 of 65) on the Department for International Development (DFID), but it has also covered a substantial portion of the other main ODA-spending departments. with ten reviews evaluating around £3.3bn of aid in FCO, BEIS/Department for Energy and Climate Change (DECC), Department of Health and Social Care(DHSC), and others including cross-cutting funds. This is around a quarter of their spend over the eight years. 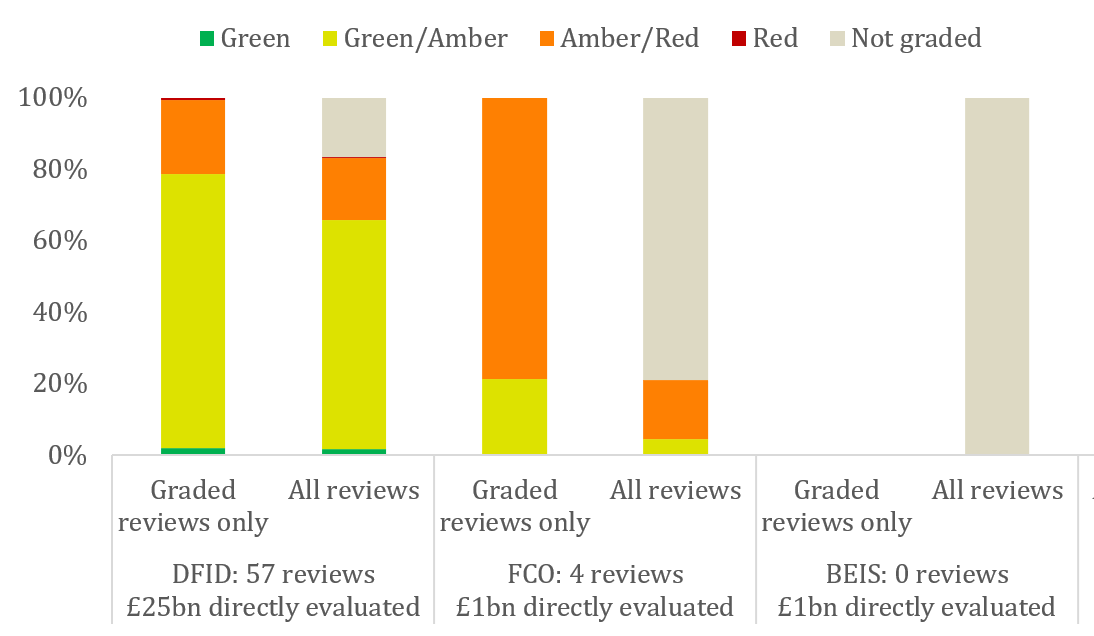 Note: Number of reviews refers to graded reviews where that department is the lead. No reviews of Home Office to date.

The reviews themselves provide recommendations on improving the impact of those projects, but looking across them we can conclude:

Value for Money in the spending review

Of course, ICAI’s methodology is not perfect (we’ll be saying more on ICAI in the coming months in response to their consultation), but this analysis should give us substantial confidence that at least 80 percent of aid is well-spent. With a spending review on the horizon, HM Treasury will be looking hard at departmental proposals and performance for further aid spend. With compelling ways to spend aid on alleviating suffering and saving lives, it will surely be hard for the FCO and its underperforming programmes to see their aid allocation maintained.

Blog Post
The UK’s Planned Use of SDRs Will Take Resources Away...
Euan Ritchie

Blog Post
Turning the UK from a Development Superpower to a...
Ranil Dissanayake