How Did Students Recover Learning Loss During COVID-19 School Closures in Ghana?

This blog is part of a series from PREPARE: a consortium of research organisations from Ghana (IEPA), Kenya (APHRC), Malawi (CERT), Senegal (CRDES), and Pakistan (tbd), all focused on the educational challenges posed by COVID-19.

How much learning did children lose whilst schools were closed in 2020? Whilst hard data is still scarce, the opinions of parents in Ghana are clear. Our survey of almost 3,700 households carried out from the 8th to 22nd of March in 2021 found that over 85 percent of parents said their children definitely or probably lost learning (Figure 1). (For more from that joint IEPA-CGD survey, see our previous blog post and stay tuned.)

What Happened to Dropout Rates after COVID-19 School Closures in Ghana?

Do you think your child/ward has lost learning of school related units/topics during the period of Covid-19 school closures?

During school closures the government offered distance learning including “Ghana Learning Television” (GL-TV). Research by colleagues at IEPA has found that though the content shown on GL-TV is similar to that taught in face-to-face classrooms, the lack of interactions between teacher and students is likely to highly limit its effectiveness.

In the face of remote learning options of limited effectiveness, what did parents do? We find that 51 percent of those parents who reported concerns about learning loss did not implement any measure to mitigate it. Poorer families were much less likely to take any action (26 percent) than the richest families (72 percent) (Figure 2).

Looking at measures implemented, one of the most common responses was relying on families to fill in: in 15 percent of households, only siblings or parents provided tutoring. A very small number of households (6 percent) declared that they used one of the available distance learning options (radio, television, or online learning materials) provided by the MoE. This is despite the availability of government radio and TV content (GL-TV) and the fact that 85 percent of households have access to a television and/or radio.

One in ten households hired private tutors but, as expected, the wealthiest families were almost 10 times as likely to have done so than the poorest families (19 percent vs. 2 percent).

Figure 2. Percent of parents that arranged to recover perceived learning loss and what measures were put in place 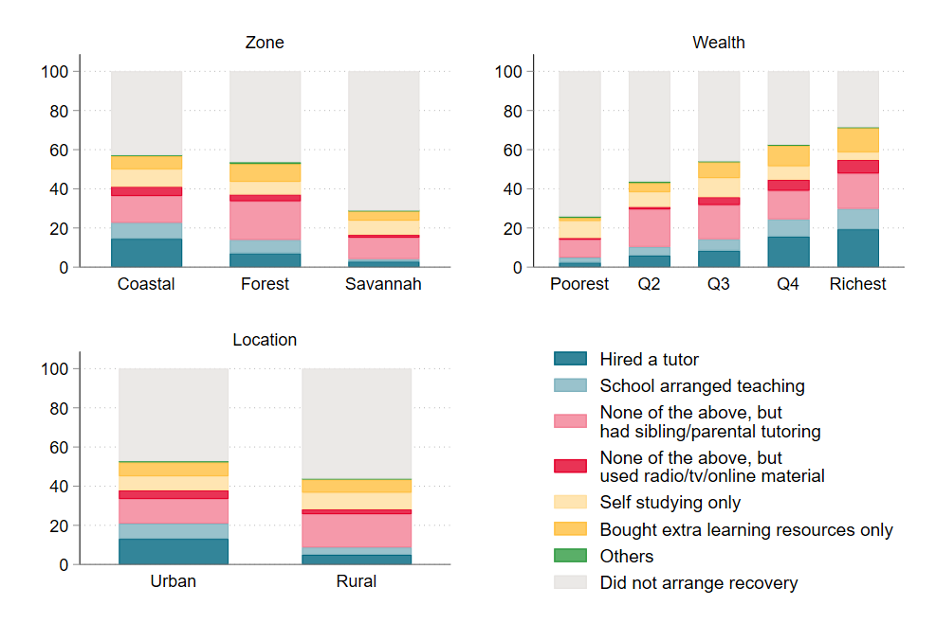 The frequency which children used their resource also varies according to the implemented measure. Children whose parents hired private tutors are more likely to “very oftenly” study compared to those who relied only on family tutoring, one the most common measures (54 percent vs. 24 percent) (Figure 3). As children from wealthier households were more likely to have implemented the former, their frequency of study was also probably higher than those from poorer households while schools were closed. 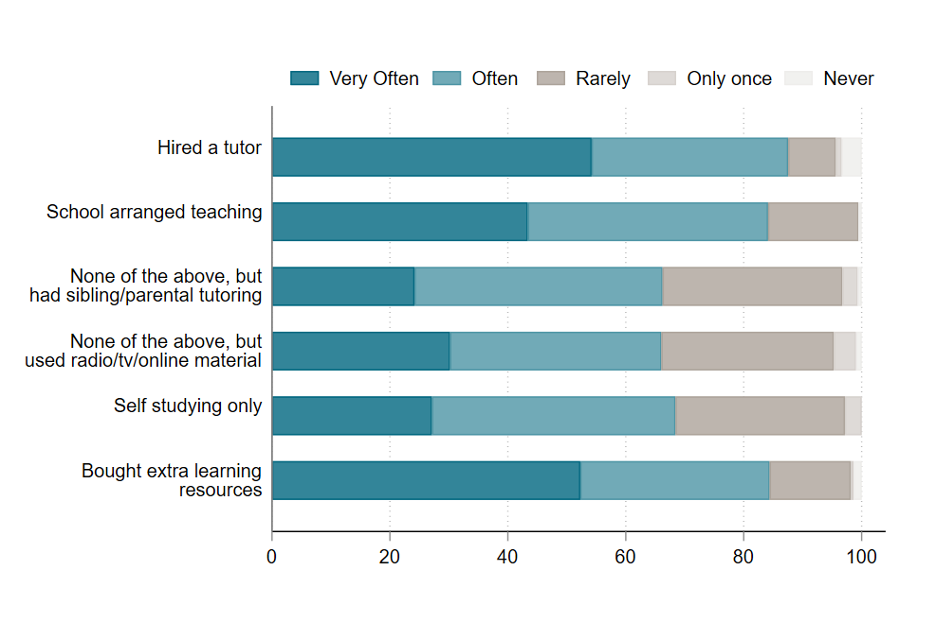 (As a share of parents that took each measure)

Schools reopened in Ghana and children from different backgrounds returned to school with distinct levels of preparedness. This is concerning as the catch-up process will be different for groups of children. In our previous blog we observed that although dropout rates were unchanged for 2021 compared with previous years, there was a spike in repetition rates. If proper remedial learning measures are not implemented to support children lagging behind, these children could fall permanently off-track.

Blog Post
To Improve Women’s Economic Standing During and After...
Megan O'Donnell