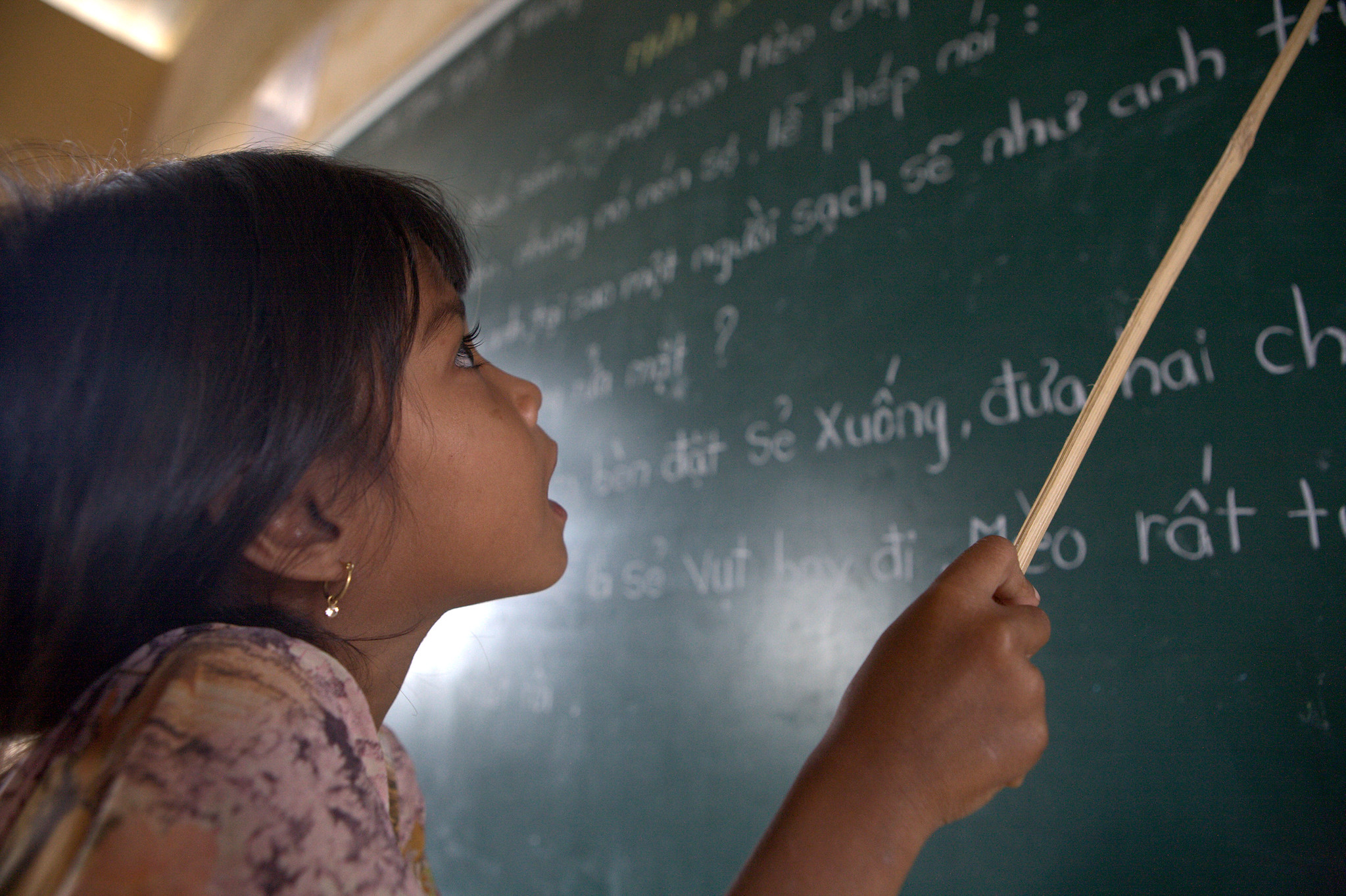 You might think girls' education and climate change are quite different issues. But, with money for and political attention on climate change growing, savvy education donors and advocacy organisations are increasingly making links between the two. The UK’s FCDO, for instance, claims girls in poor countries are “among the greatest assets we have in responding to the climate crisis.” And UNESCO cites Project Drawdown, which ranks educating girls and women 6th out of 80 solutions to combat climate change.

We argue this strategy is empirically and morally flawed. There is no need to greenwash education.

The main claim that girls’ education is integral to combating climate change relies on a reduction in fertility rates among educated girls. In other words, educating girls will lead to smaller populations, which will lead to fewer total emissions. Such claims are problematic on two main grounds.

First, it is empirically questionable to focus on the instrumental role of girls’ education in mitigating climate change. Increased educational attainment is just as likely to produce a net increase in emissions.

Second, it’s morally indefensible to ask poor countries with low emissions to reduce their populations to save the rest of us. Beyond this, an undue focus on girls’ and women’s fertility, rather than their rights, could cause unintended harm.

Of course, it is possible—though the current evidence is weak—that girls’ education could contribute to more gender-equal participation in climate leadership and decision-making. Over time this could lead to more inclusive and effective environmental policies and choices. But what is more pressing is that the climate-related impacts on children’s wellbeing, development and school participation are tackled today.

This week, leaders will converge in London in a bid to raise US$5 billion for the Global Partnership for Education. We urge them to fund education because education is important in its own right. Not because girls living in poor countries are an “asset” to help rich countries tackle a climate crisis largely of their own making.

More education is likely to increase, not reduce, emissions

Again, the main claim that girls’ education is the key to mitigating climate change relies on the link between girls' education and a reduction in fertility rates, leading to smaller future populations which emit less carbon.

It’s true that several simulations demonstrate that decreasing the rate of population growth could substantially reduce global carbon dioxide emissions. But these models contain limited data and are largely driven by the populations of China and India. This means projections impose global averages which do not reflect variation in demographic contexts across sub-Saharan Africa. Given that more than half of all low- and lower-middle income countries are in sub-Saharan Africa, claims based on these models may result in misguided policy and resource decisions. And in the worst cases, policies driven by these projections risk harming the women and girls they seek to help.

Despite that, outputs from these questionable models have been used to frame the link between girls’ education and climate change. For instance, a 2021 Malala Fund report claims that “if every girl was able to exercise her sexual and reproductive health and rights through quality education and had access to modern contraception, it could reduce total emissions from fossil fuels by 37%–41% by the end of the century.” Another well-publicised estimate suggests that reducing population size could avoid 85.42 gigatons of carbon dioxide-equivalent emissions from 2020-2050.

Instead, evidence from population science suggests that fertility policy is unlikely to have a large effect on carbon emissions, even if fertility rates change very quickly. In fact, more recent versions of the above models find that increased educational attainment is just as likely to produce a net increase in emissions. Often left out of claims about the role that girls’ education can play in climate change mitigation is the empirical connection between education level and emissions. Figure 1 shows CO2 emissions by Learning Adjusted Year of Schooling, a metric that combines education access and learning outcomes into a single measure. Increased girls’ education is positively correlated with emissions, and the high-income countries with higher levels of female education emit more carbon than average. This may be because more education leads to higher incomes, which can result in more consumption and in some cases a larger industrial workforce. 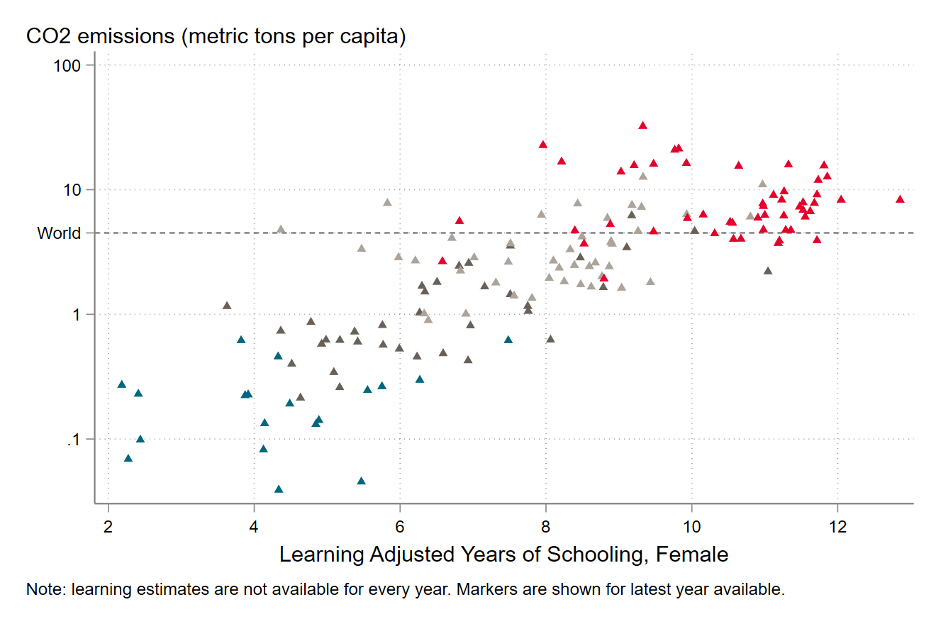 Of course, none of this is to suggest that girls’ education is a driver of climate change, or that abandoning girls’ education would be an effective way to prevent the warming of the planet. But the relationship between education and emissions conveys the overarching conundrum at the intersection of development and climate change: successful development is correlated with increased CO2 emissions. Although a more educated population can help develop solutions to climate change, it is not the case that more education for girls will automatically reduce emissions.

Foregrounding instrumentalist arguments around female fertility in promoting girls’ education can be dangerous. Education can help girls to become more informed and have greater agency as to their desired family size. But there’s a long and troubling history of development actors seeking to control the reproductive decisions of women in poor countries for the “greater good”. Linking girls’ education to population and carbon emissions is a slippery slope toward a Malthusian population control logic. And it inherently places responsibility for emissions reductions on the fertility of women and girls in low-income countries.

Presently, the conversation about girls’ education and climate change is mostly driven by Western voices speaking about non-Western places. The organizations uncritically promoting these claims may want to take into account the challenges and lessons learned from other policies that attempted to control fertility decisions of women in poor countries.

Educating poor girls to reduce emissions is not an effective strategy because developing countries are not the primary producers of global emissions. As emerging economies grow wealthier, maintaining low emissions will be important. But mitigation strategies aimed at reducing current emissions will be more effective and relevant in high-income countries (Figure 2).

Figure 2. Annual and cumulative emissions from 52 ‘high-fertility’ countries, the EU-27, and the United States. 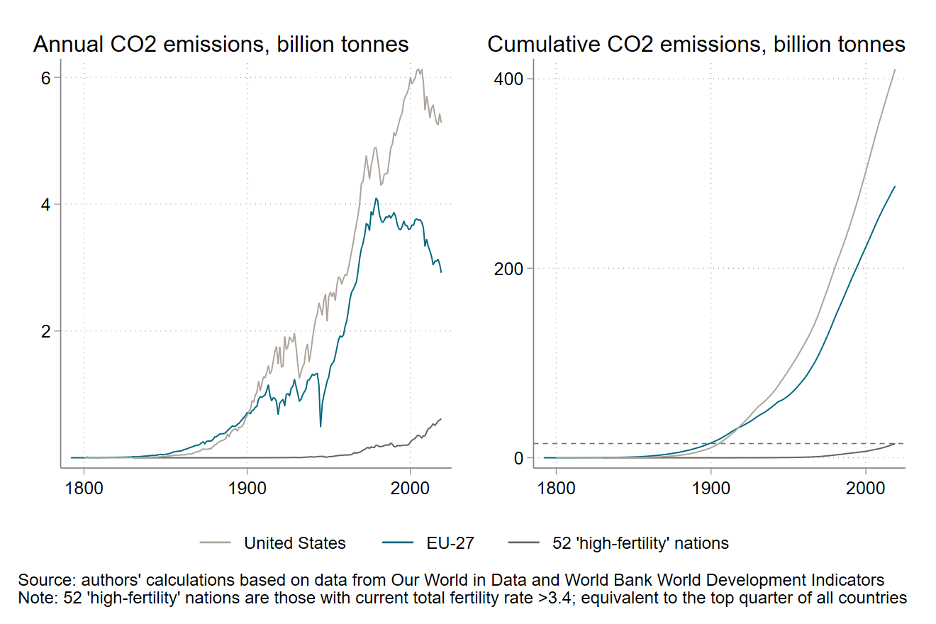 It becomes even clearer when considering historical emissions: what matters is the all-time stock of CO2 in the atmosphere, not annual flows. The 52 countries with fertility rates currently above 3.4 have emitted as much total CO2 (as of 2019) as the United States had by roughly 1900. One way of quantifying national responsibility for climate change looks at historical emissions in excess of a given level of atmospheric CO2 concentration. By this measure, the global north is responsible for 92 percent of excess global CO2 emissions.

Funding decisions should be driven by evidence, not wishful thinking

Both girls’ education and climate mitigation and adaptation are worth investing in. But doing so effectively and responsibly requires a clear-eyed look at the causal pathways involved, before funding and policy decisions are made. It’s tempting to tell ourselves easy stories—that the solution to a problem (climate change) we all agree is bad, must be a policy (girls’ education) that we all agree is good. But the choices we make to fight climate change and to educate girls need to be rooted in the best evidence possible, or we risk failing to make progress on either.

In an accompanying blog, we present five ways that education systems can support children in the face of climate change—today.