Fragile Gains in a Fragile State: Economic Development in Afghanistan

When NATO forces entered Afghanistan following the attacks of September 11, 2001, much of the country’s infrastructure, as well as its public institutions and underlying social fabric, had been destroyed by more than two and a half decades of conflict. At the time, landmines were still killing an average of 40 Afghans a day.

Over the last 15 years, the international community, led by the United States, has invested massive resources in an attempt to transform Afghanistan into a more stable, modern, and prosperous country. While most of these resources were directed towards military support, a good chunk went to supporting economic development. In fact, Afghanistan has received more official development assistance than any other country since 2001, except for Iraq (See Figure 1). 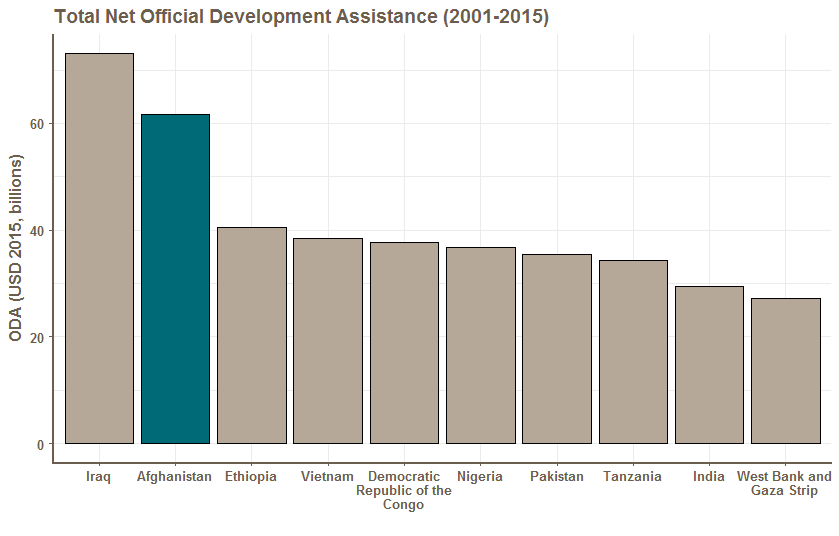 Despite the often well-founded pessimism attached to the international effort in Afghanistan, the average Afghan, and particularly the average Afghan woman, is better off today than he or she was in 2001, according to the data. Consider the following advances made since that time:

These important gains are at risk, as the security situation in Afghanistan has deteriorated over the last several years following the drawdown of foreign troops. Today, the Taliban control 11 percent of the districts in the country and contest an additional 29 percent.* They have also ramped up the number of attacks in major cities. As a result, civilian casualties increased to 11,418 (3,498 deaths and 7,920 injuries) in 2016, the highest on record. At the same time, the country’s ability to provide social services is under strain due to the growing number of the internally displaced persons, which climbed to 1.4 million in 2016, and includes a large number of former refugees who have been repatriated from Europe, Iran, and Pakistan.

The recent announcement by the Trump administration that it would modestly increase the number of US troops operating in Afghanistan improves the chances of achieving stability. However, meeting this goal will also require the international community and the Afghan authorities to learn from past mistakes.

Two steps forward, one step back

Development in Afghanistan has been uneven and the rate of progress has generally tracked the evolution of the security situation. Starting from an extremely low base in 2002, the country achieved rapid progress early on, as technical advisors from USAID, DFID, the IMF, and World Bank helped the government rebuild key institutions essentially from scratch, and as donors implemented projects focused on providing basic health and education services.

During this time, the country enjoyed a brief respite from conflict. By the mid-2000s, however, the Taliban had begun to reassert itself in the south. The group’s resurgence was facilitated in part by the Bush administration’s decision to divert attention and resources to Iraq, and in part by the inability of the Afghan government to exert control and provide services in the provinces. In 2009, the United States and its allies responded to the growing insurgency by settling on a military strategy that relied on a surge in troops and aid aimed at dislodging the Taliban and winning the hearts and minds of rural Afghans.

The strategy temporarily supported growth and allowed the government to regain a tenuous hold on territory but did little to address some of the underlying problems in the country that continue to fester today, including widespread corruption and opium production. When the Obama administration announced a staggered troop withdrawal beginning in 2011, it soon became clear that many of the security and economics gains achieved were illusory.

Deteriorating security and political uncertainty ahead of the 2014 election led to a collapse in private investment and a sharp slowdown in growth, which fell from 14.0 percent in 2012 to 1.3 percent in 2014. These factors in turn contributed to an increase in the poverty rate and a 3x increase in male unemployment between 2011 and 2014. Unemployment is particularly problematic in Afghanistan because of the country’s “youth bulge”: roughly 63 percent of Afghans are under 25 years of age. The Taliban has taken advantage of the lack of employment opportunities for young men to lure potential recruits with salaries twice as high as those offered by the Afghan army.

Most of the improvements noted above were made in the period 2001-2010. But the current decade has been cruel to Afghanistan. In a 2016 poll conducted by the Asia Foundation, 66 percent of Afghans believed that the country was going in the wrong direction, the lowest level of optimism since 2004. The question now is whether the Afghan authorities and international community can arrest the country’s recent slide, stabilize security, and build on the progress made in earlier years. Addressing the long-standing problems that have prevented a lasting peace from taking hold will require changes in behavior on the part of both donors and the government.

A shot at stability

The international community’s inability to secure a lasting peace in Afghanistan after 15 years of engagement has naturally produced impatience in both Afghanistan and its partner countries. However, a full withdrawal of international assistance would leave the development gains made since 2001 at the mercy of the Taliban. The continued presence of US troops in Afghanistan preserves the possibility that the Afghan government can make inroads in governing—and that a fair political settlement, which pacifies the Taliban without giving them the power to roll back the freedom of women, for example, can be reached. In doing so, it can help to improve the outlook for one of the world’s poorest and most vulnerable populations.