Five Years Later, One Million Refugees Are Thriving in Germany

This is one of a series of blogs exploring the issues facing refugees’ economic inclusion within the top refugee and forced migrant hosting countries. All are being authored with local experts, and provide a snapshot of the barriers refugees face and what the policy priorities are going forward. All blogs can be found here: https://www.cgdev.org/page/labor-market-access

In 2015, large numbers of refugees fleeing war and terrorism in Syria, Afghanistan, and Iraq arrived on Europe’s shores. Fear and uncertainty reigned—who would give these people asylum and how would they integrate? The German Chancellor, Angela Merkel, remained undaunted. “We can do this!” she announced in August of that year. And do this, they did. In 2015 and 2016, Germany received over one million first-time asylum applications.

Five years later, over half of these refugees have found a job, and public support for immigration remains high. Still, integration challenges remain. Refugees typically work in lower-paid and more precarious roles, which have been hit harder by COVID-19. Germany needs to institute policies that target specific barriers to full labor market integration, such as training and the certification of existing skills.

Prior to 2015, the number of people applying for asylum in Germany was relatively low (see figure 1). Arrivals predominantly came from seven countries: Iraq, Turkey, Russia, Afghanistan, Kosovo, Serbia, and Syria. While asylum seekers only had to wait for three months before gaining access to the labor market—one of the lowest rates in Europe—underemployment was high. 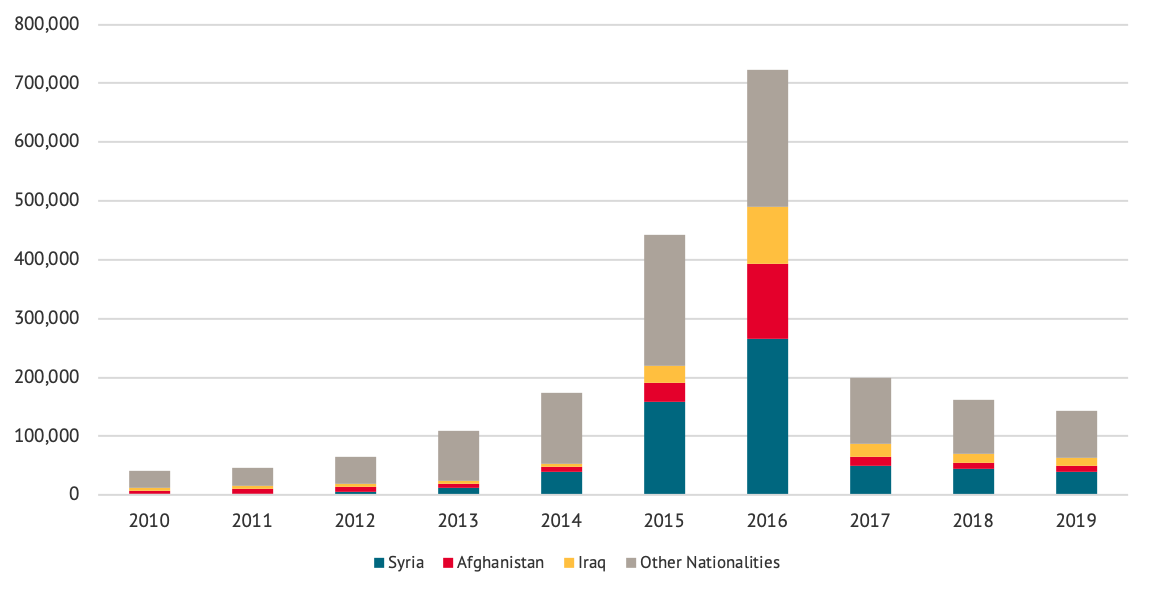 As images documenting the distress of people fleeing war and terrorism in the Middle East began to surface, public support for accepting refugees increased. Yet Merkel’s decision to take in an unlimited number of people came as a surprise. It was perceived as unilateral, and garnered criticism even from her own party. It was sold as a difficult but surmountable challenge, an ethical decision rather than a political one.

The asylum processing system was completely unprepared to deal with this large influx. German policymakers began to introduce a series of regulations to improve the speed and efficiency of asylum procedures. Asylum seekers from countries with high protection rates were even able to start integration courses before receiving a decision on their application. While this sped up processing, it came at the expense of people from countries further down the list.

By 2018, 72 percent of the asylum seekers had been granted protection in Germany, gaining the right to work without restrictions. Some 17 percent had pending claims with restricted work authorization. Prospective asylum seekers were shared among the different regions of Germany, using a scheme called Königssteiner Schlüssel. Many municipalities were overwhelmed, lacking appropriate infrastructure such as housing and language classes.

Five years on, the integration of this population is impressive. By December 2018, there were 1.8 million people with a refugee background in Germany (including beneficiaries of international protection, asylum seekers, and those who had their request rejected). 75 percent are younger than 40, and most have higher levels of education than other migrants. Today, about half have found a job, paid training, or internship. On arrival, only about one percent declared having good or very good German language skills. By 2018, that figure had increased to 44 percent. Such contributions are badly needed within an aging German labor market, which is facing skill shortages and needs trained migrant labor.

Such successful integration also has impacted the local German population. For example, between 2008 and 2015, the number of employees in companies founded by migrants grew by 50 percent (to 1.5 million). It has also mobilized civil society. A survey by the Allensbach Institute for Public Opinion Research suggests that 55 percent of Germans have contributed to the integration of refugees since 2015, either financially or through their own involvement in supportive actions. Such engagement has increased support for migrant populations overall and has demonstrated the success of Merkel’s move.

How the decision influenced public opinion

Germany has maintained high levels of support for accepting refugees, both before and after Merkel’s decision. In September 2015, a Politbarometer poll found that 66 percent felt allowing in large refugee flows was the right thing to do. The same survey has consistently found that Germans feel they can cope with these flows (figure 2). Five years later, following the fire in the Moria refugee camp in Greece, another Politbarometer poll still found widespread support for a more welcoming refugee policy. Only nine percent were found to be completely opposed to taking in more refugees. 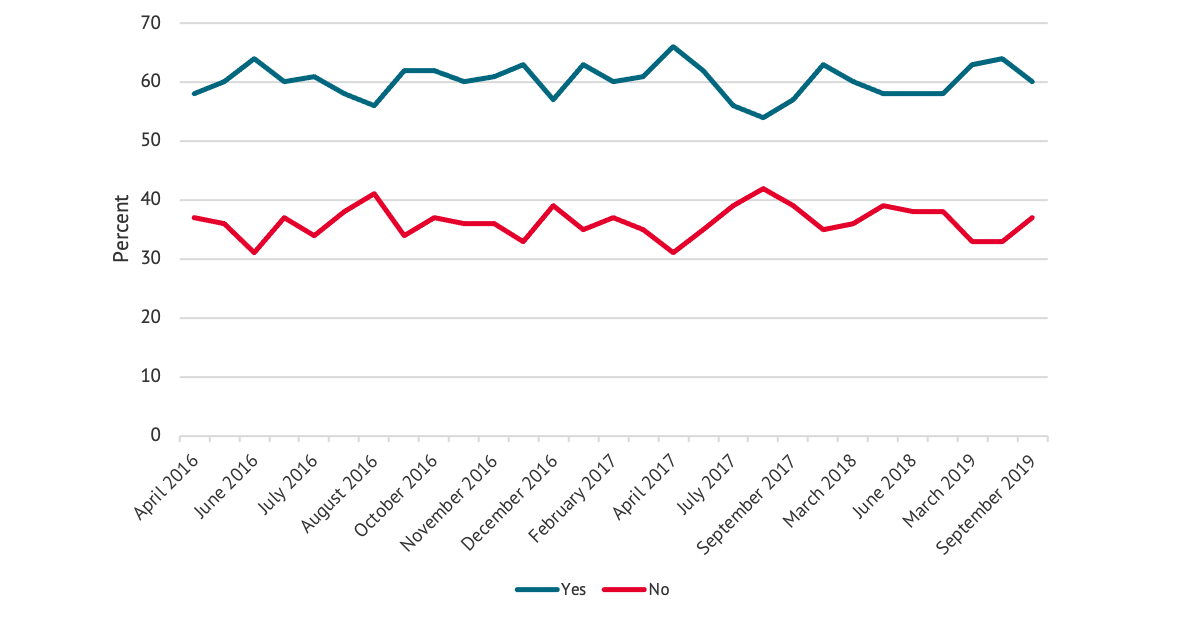 Yet, Germans have always been concerned about the integration of refugees—the primary problem of concern between 2014 and 2018 (figure 3). As described above, the lack of a developed regional infrastructure to cope with such a large number of arrivals brought challenges and mistakes, some of which have taken a long time to rectify. In 2019, a study by Ipsos MORI found that only 31 percent of Germans believed that most refugees could successfully integrate in the society (compared with 37 percent in 2017). This concern may have contributed to the relatively lower levels of support for future migration movements, choosing to focus on ensuring existing populations are well integrated first. 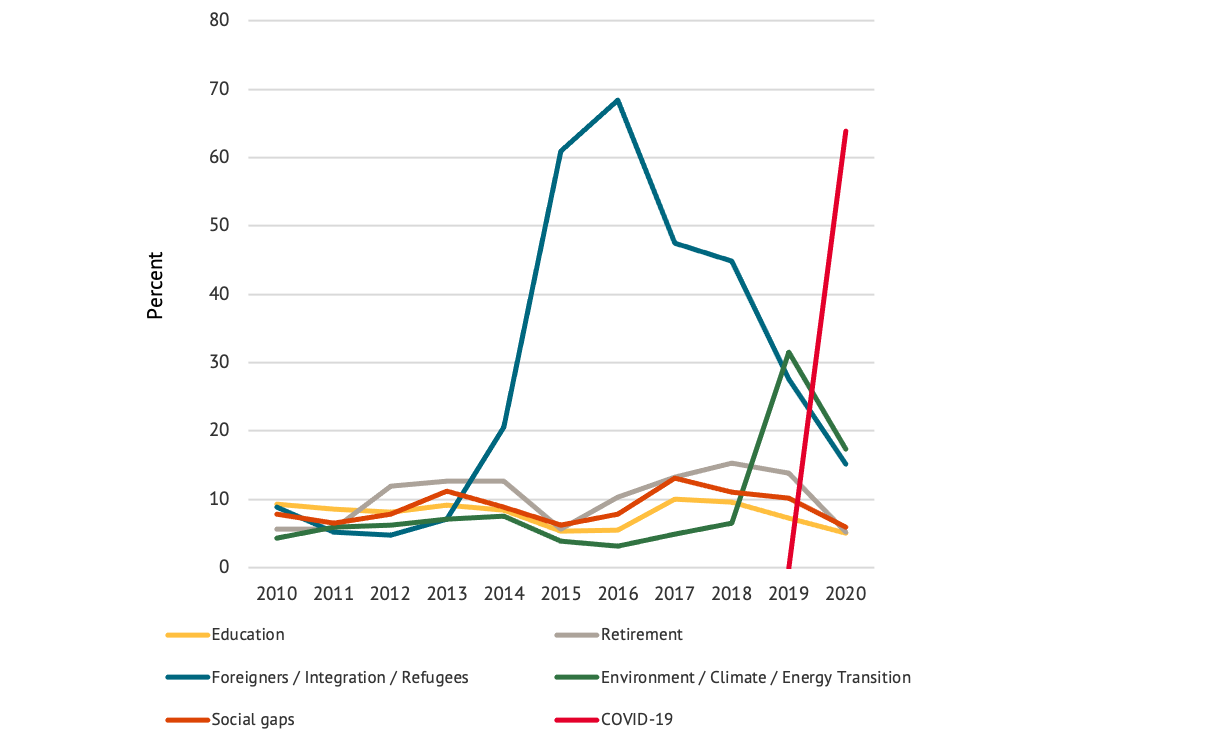 Concerns about integration, however, have provided an opening for the rise of the far-right, anti-immigrant party, Alternative for Germany (Alternative für Deutschland, AfD). They won 94 (out of 709) seats in the Bundestag in the 2017 elections, partly campaigning on an anti-immigration platform. Merkel’s decision clearly benefited the AFD but similar increases in support for far-right parties can be seen around the world, including in countries with small refugee populations. Therefore, it makes more sense to attribute the rise of the AFD to structural concerns, such as inequality, precarity, and pessimism about the future, rather than Merkel’s decision.

Despite progress, challenges to full economic inclusion for refugees remain. The German labor market is complicated and bureaucratic, creating barriers for foreign qualification recognition, and those who don’t speak German. Women have poorer prospects, especially those with young children, and healthcare access remains low for recently arrived refugees.

COVID-19 has amplified these challenges. Refugees typically work in lower-paid and more precarious roles, which have been hit harder by the pandemic. As a result, they have seen the largest increase in unemployment, compared to both other migrants and German locals. The suspension of learning opportunities and social interactions are particularly detrimental, meaning refugees are receiving less support. These challenges have been recognised by the Chancellor, who hosted a national integration summit in October. There it was decided that services such as German language courses, counselling, and job support should all be provided digitally to improve access during and after the pandemic.

What is now needed is a set of policies that precisely target well-identified barriers to labor market integration. The main issue is training and the certification of existing skills. Many refugees report labor market experience in their country of origin, but they lack certifications or documentation to prove it. Moreover, the equivalence of some certifications is difficult to assess due to important differences in educational systems. Projects such as the Labour-INT project, supporting the integration of refugees from arrival up to the workplace, through skills assessment, training, and job placement, are promising and go in the right direction. Initiatives incentivizing firms to hire refugees and assisting them in the recruitment process could also improve labor market integration.

Facilitating early access to the health care system could also contribute to improving the well-being of refugees, in particular when it comes to detecting consequences of traumatic events before or during their movement, such as depression and emotional distress. Before their asylum request is decided or if their duration of stay is below 15 months, asylum seekers must request medical visits from the local health authority, which involves a substantial amount of bureaucracy. Some federal states have already lowered the barriers of access to health care by introducing electronic health cards.

Other issues need to be better understood and require more research. For example, the low participation rate of female refugees in integration classes, language classes, or the labor market, should be addressed. Proposed explanations rank from cultural differences and religion, to problems related to childcare and inappropriate schedules. A better understanding of the exact causes would help design effective projects to address such specific issues and promote better economic integration for this population.

The figures discussed above show that Merkel’s decision to admit one million refugees in 2015 has had immense economic and social benefits for Germany, while providing needed support to a vulnerable population. Targeted progress on integration barriers such as skills certification and those disproportionately affecting women, would do even more to magnify this impact.