The Final Word on Microcredit? | Center for Global Development | Ideas to Action Skip to main content

The Final Word on Microcredit?

Two influential movements within the development industry collided head-on this month: the microcredit movement and the movement to subject development policies to rigorous impact evaluation. As Rachel Glennerster, the director of MIT's Poverty Action Lab put it:

A decade later, the new January volume of the American Economic Journal: Applied Economics that Glennerster refers to contains six separate randomized control trials, using various designs and methods, all attempting to measure the impact of microcredit on poverty (broadly defined), and all reporting their results in a more or less comparable format. It's early days, but I think it's fair to say this volume marks a major milestone in the evolution of development economics as an experimental science. It is not only the culmination of over a decade of work by dozens of researchers working across six countries and four continents, but one of the first instances where development economics has confronted multiple, high-quality experimental results on a core question in the field.

The results, however, are a tad disappointing for microcredit proponents. 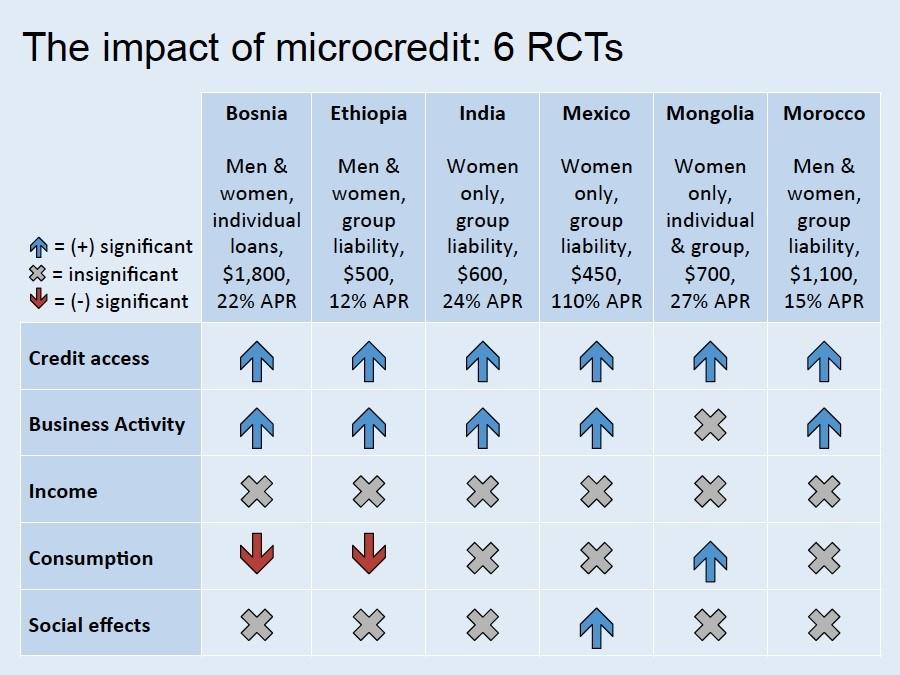 As Abhijeet Banerjee, Dean Karlan, and Jonathan Zinman note in their introduction to the volume, the most consistent finding across the six studies is a "lack of evidence of transformative effects on the average borrower." None of the six studies found any significant impact on borrowers' household income. While the Mongolia program raised borrowers’ consumption (economists' preferred measure of poverty reduction), the Bosnian study found the opposite effect, and the Ethiopia study found a negative impact on a related concept, food security.

At this point, it is clear that any responsible policymaker must support the end of public subsidies for microcredit, social entrepreneurs should redirect their energies to some better cause, and this multi-billion dollar industry must wind down. Rigorous impact evaluation has proven it was all built on a myth.

I’m kidding. In reality, I don’t know of anyone making this argument. But it's useful to articulate why not. The evidence is fairly damning, after all.  So here are two reasons why it's premature to draw any sweeping policy conclusions.

All six studies find that extending access to microcredit has a big, positive impact on access to credit. This is perhaps not as trivial as it might sound, as it implies microcredit is not exclusively crowding out other lending sources. People who wouldn't have gotten loans are now getting loans, and when they do, they're starting new businesses and expanding old ones.

To paraphrase my friend David Roodman in his excellent CGD book on microfinance: if development is freedom, and freedom means a bigger choice set, then microcredit is successful development. People are choosing to borrow and invest in ways they couldn't before.

The results of the six RCTs were also much more varied than that first table implies. For starters, the positive consumption impacts in Mongolia and the “social effects” in Mexico (a significant rise in women's decision-making power) both deviate from the overall picture of zero impact on welfare outcomes. But the real heterogeneity across the six studies is hidden behind those gray X's in the table above, which indicate the many insignificant and inconclusive results across the various studies. Some of those X’s should genuinely be considered zeros. In other cases, however, the confidence intervals are wide. These are cases where focusing solely on the sign and statistical significance of a result gives a very incomplete picture. 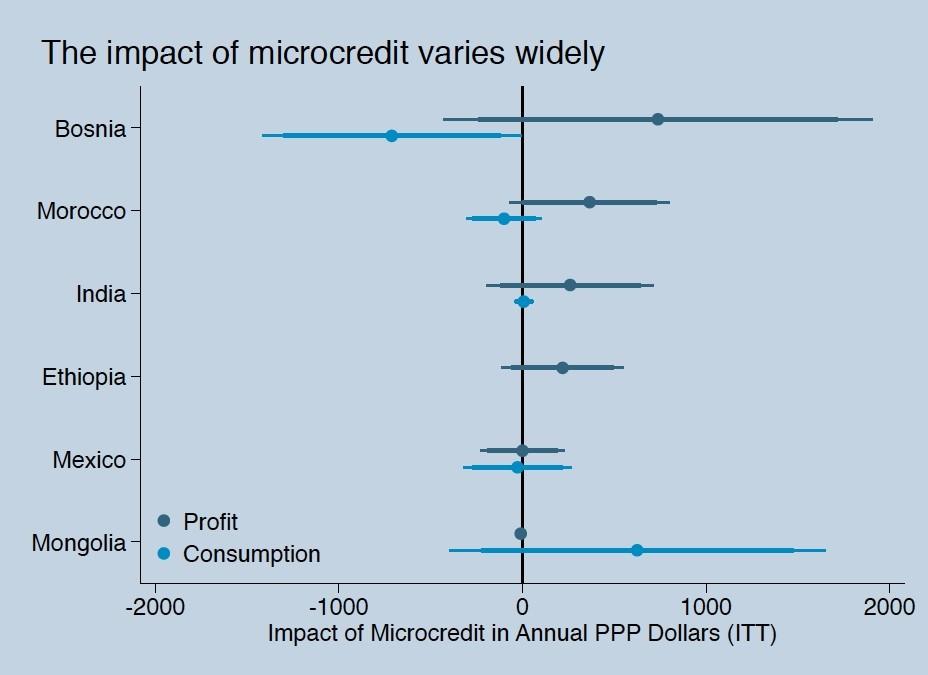 Measured in monetary terms—using comparable purchasing-power parity dollars—the point estimates of the impact on profits ranged from an increase of more than $700 per year in Bosnia to zero in Mongolia. Conversely, impacts on consumption ranged from a $700 per year decline in Bosnia to a $600 increase in Mongolia. If you squint at the figure, you could argue there's a visible trade-off between using the loans for business investment and profit versus short-term consumption.

With the enormous benefit of hindsight, this heterogeneity is not surprising. After all, the programs and contexts in which they operated differed enormously. Some of the programs lent only to women, others to men as well. Some gave individual loans, some only group loans. And both loan sizes and interest rates were very different in different places,  ranging, for instance, from a 15 percent rate in Morocco to 110 percent in Mexico. The catchall term "microcredit" encompasses virtually infinite permutations of program characteristics.

This means there is never going to be a single answer to the question, "What is the impact of microcredit?" because, inevitably, "it depends." Lant Pritchett and I wrote a short paper for the recent American Economic Association conference (available here), which discusses this heterogeneity and what it means for evidence-based development policy.  The bottom line is that policymakers should be extremely cautious in extrapolating the results of impact evaluations across contexts.  Notably, the authors in this new AEJ volume focus on nuances and underlying mechanisms, and carefully avoid such extrapolations.

Of course, the ultimate goal is to eventually be able to predict the impact of some new microcredit program in some new context, in the same way “real” scientists can predict the boiling point of water based on the local air pressure and oxygen levels.  We may not be there yet, but these new studies take us six big steps closer to that goal.

You can read the six studies published in AEJ here:

Crépon, B., Devoto, F., Duflo, E., & Pariente, W. (2014). "Estimating the impact of microcredit on those who take it up: Evidence from a randomized experiment in Morocco," American Economic Journal: Applied Economics, vol 7(1). [ungated]