The EU’s Global Recovery Initiative: A Paper Tiger or the Markings of a Geopolitical Commission? | Center for Global Development | Ideas to Action Skip to main content

The EU’s Global Recovery Initiative: A Paper Tiger or the Markings of a Geopolitical Commission?

Last week, EU foreign affairs and development ministers met virtually, in part to discuss an initiative floated in May 2020 by European Commission President Von der Leyen calling for a Global Recovery Initiative linking debt relief and investments to the Sustainable Development Goals (SDGs). Six months and a ministerial meeting later, we still know very little about the initiative. On the face of it, we deduce that the idea is for some sort of global mechanism for debt-for-SDGs swaps. Yet, while this may be attractive on paper, the reality is that the EU and its member states have little leverage in negotiations on a global debt initiative given the low share of debt they themselves hold in partner countries.

Irrespective of the merits and drawbacks of debt swaps for development, below, we set out the EU’s position as an international creditor and offer thoughts for what role the EU could play in debt relief.

With little information to go on, President Von der Leyen’s proposal appears to be for a global mechanism for debt-for-SDGs swaps: In exchange for debt forgiveness, the debtor-government commits to invest the accrued savings in SDG-related investments. Similar schemes have been implemented in the past to free up finance for the environment and health sectors, and the idea seems to be gaining more traction among policymakers. For example, in 2017 the Global Fund launched the Debt2Health initiative to link debt cancellation to investment in the fight against AIDS, tuberculosis, and malaria.

The latest statistics on the state of the world economy highlight the gravity of the crisis induced by COVID-19. According to the IMF, global GDP will contract by more than 4 percent in 2020, while trade volumes are down by more than 10 percent. Per capita incomes in the vast majority of emerging markets and developing economies are expected to shrink this year, tipping many millions back into poverty. Deep recessions triggered by the pandemic are already leaving deep-rooted scars, including lower investment, erosion of the human capital of the unemployed, and disintegration of global trade and supply linkages.

Across Europe, the near-universal national COVID-19 response has been to sacrifice economic activity to save lives and then do whatever it takes to protect the EU economic structure and social cohesion. The EU announced a series of multibillion-euro recovery initiatives, including its largest ever multi-annual budget and recovery fund. Many member states adopted various temporary income payment schemes to protect businesses as well as formal- and informal-sector workers, creating a surge of billions of euros in fiscal deficit and a marked increase in government debt. Yet for low-income countries, high interest rates and low credit ratings prevent them from putting such large-scale stimulus in place. Figure 1 shows that in developed and transition economies, the median value of additional fiscal spending per person is USD 1365 compared to USD 17.8 in least developed countries. In this context, our colleagues have highlighted the urgency of engaging in timely negotiations with bilateral, multilateral and private creditors to organise debt restructuring in developing countries. 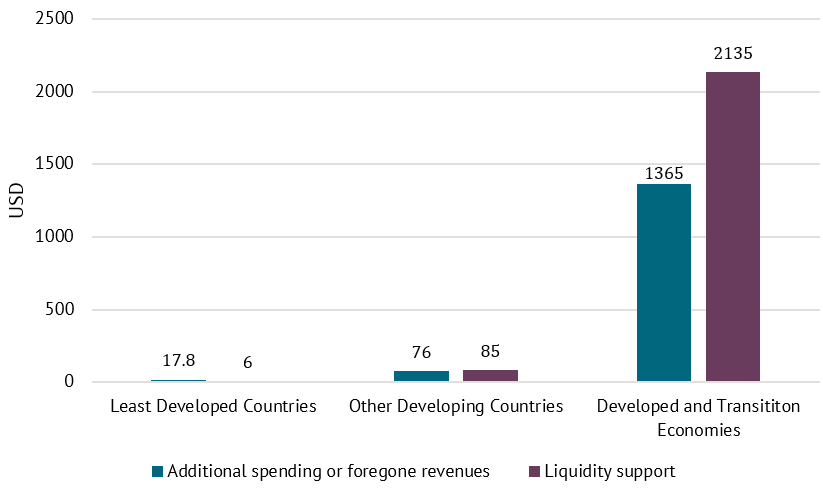 The EU’s leverage, or lack thereof 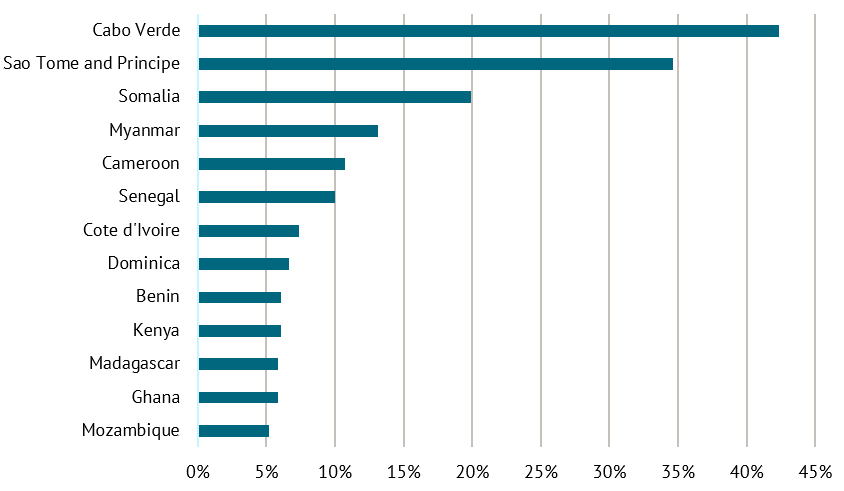 Furthermore, of the 27 EU member states, only five own the bulk of the credits to countries in debt distress. Figure 3 shows that France, Germany, Italy, Portugal, and Spain account for more than 86 percent of the total share of external debt owned by EU countries. 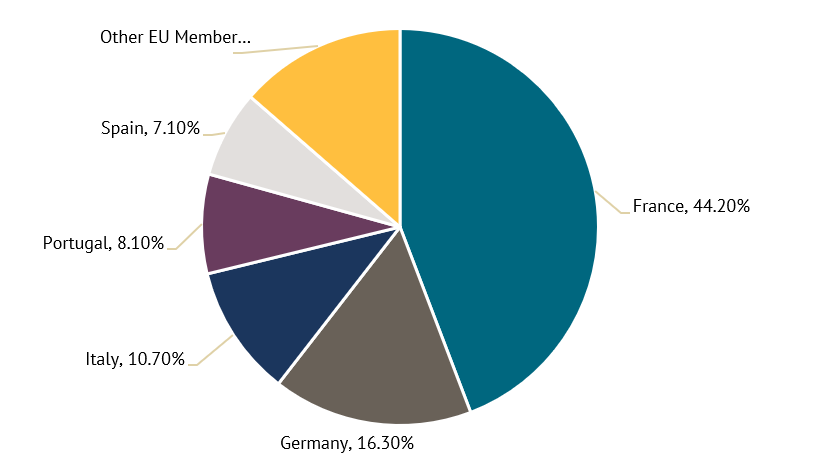