The Dutch 2021 Elections: Whither Development Assistance?

On 17th March, the Dutch will make their way to the polls to elect a new government. Although only in charge of a caretaker government following a  scandal over child care benefits, Dutch Prime Minister Mark Rutte remains largely popular at home for his management of the pandemic through an “intelligent lockdown” and seems to be heading towards a fourth term.

Looking at the political parties’ manifestos and in a scenario where Rutte’s party, the People’s Party for Freedom and Democracy (VDD), becomes more dominant in the coalition as projected, the results could have significant consequences for Dutch development policy. The amount and purpose of Dutch aid in the years to come are at stake. In a world facing the steepest decline in human development in more than three decades, this blog draws attention to the threats that the election campaign proposals pose to the Netherlands’ credibility as a leading international donor.

Between 1975 and 2012, the Netherlands achieved and maintained its commitment to give 0.7 percent of its gross national income (GNI) in official development assistance (ODA). But it has seen an almost continuous decline in this ratio since Prime Minister Rutte came into office in 2010 (see figure 1). In response to the pandemic, however, the ODA/GNI ratio is expected to increase again, from 0.59 percent in 2019 to 0.61 percent in 2020 and 2021. Nevertheless, frontloading the increase could come at the cost of a heavily reduced budget between 2022 and 2024. 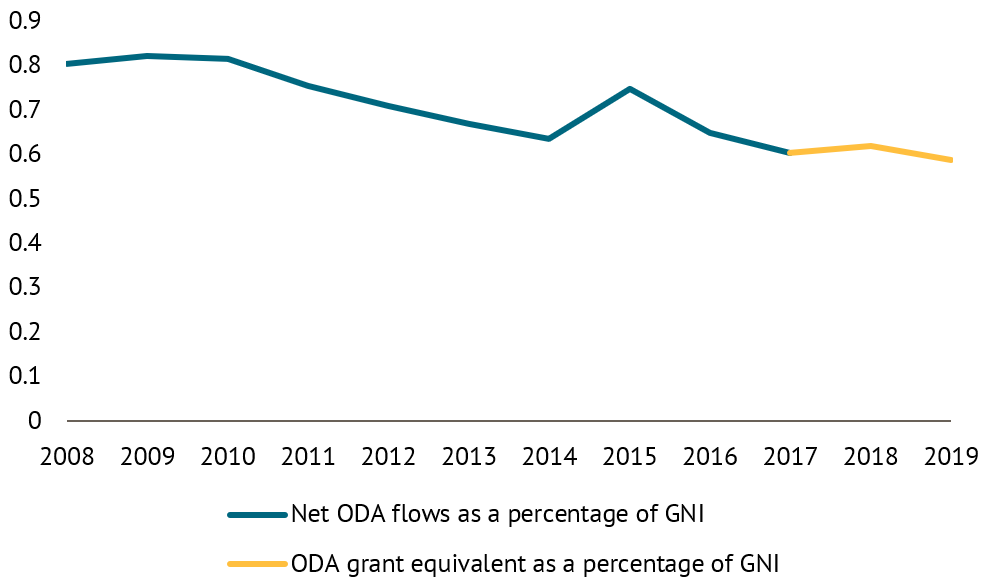 Despite declining funding, the Netherlands remains among the 10 largest OECD Development Assistance Committee (DAC) donors, and it manages to focus its development policies on issues where the country has strong comparative advantages. In 2018, following the latest coalition agreement, it refocussed its aid on four themes: (i) sexual and reproductive health and rights, (ii) water management, (iii) agriculture, and (iv) security and the rule of law. This change in thematic priorities also came with new geographic priorities in Europe’s vicinity: the West African Sahel; the Horn of Africa; and the Middle East and North Africa.

Beyond ODA, the Netherlands also ambitions to champion the provision of global public goods. Last year’s edition of CGD’s Commitment to Development Index demonstrated the Netherlands’ relatively coherent approach to policies that impact development. But while the country performed well in linking development ambitions with trade and security issues, there is room for the Netherlands to improve in technology transfer and diffusion as well as in its openness towards migrants from low-income countries.

A precarious balance of power which could tilt to the right

The current coalition, in power since 2017, is composed of four parties: the centre right VVD, the centre right Christian Democratic Appeal (CDA), the social-liberal Democrats 66 (D66), and the centre-left Christian Union party (CU). This alliance at the centre of the political spectrum succeeded in safeguarding the Dutch commitment to development and controlling the damage to the ODA budget under the leadership of the Minister for Foreign Trade and Development Cooperation, Sigrid Kaag from D66.

However, two important features could throw the balance of power off-kilter in the aftermath of the elections in March. Firstly, there has been a change in discourse from the VVD, which is now determined to focus more on national issues in response to the pressure from the extreme-right Party for Freedom. The VVD’s proposals on asylum and migration policy are particularly telling. The party’s manifesto does not rule out suspending the right to apply for asylum and closing the Dutch borders in the face of a new migration crisis. Secondly, projected to move from 33 to 38 seats in the Dutch House of Representatives, the VVD will most likely reinforce its dominant position in the coalition, far ahead of the CDA, polling at 18 seats. These two disruptors could put pressure on the volume, conditionality, and objective of Dutch development aid.

There are three identifiable risks for Dutch development policy. The first relates to the amount allocated to development cooperation by the Dutch government. In its manifesto the VVD advocates for severing the link between ODA and GNI, thereby “halting any increase in Dutch ODA when the economy grows.” The VVD is also calling for private individuals rather than the Dutch state to finance nongovernmental organisations (NGOs) in development. In this scenario, NGOs dependent on Dutch financing, which represented 26 percent of the total bilateral aid (€ 830 million) in 2019, could be the first to suffer cuts from this decision.

The second risk relates to the potential reinforcement of the conditions attached to aid. Both the VVD and the CDA clearly view cooperation on migration as an imperative for development cooperation. Thus, countries refusing to engage in migration partnerships would see their assistance dramatically reduced or even entirely withdrawn. The VVD goes even further in wanting to channel “more money through the EU at the expense of the Dutch UN contribution to make concrete political demands to partner countries.” Using aid as a means of exercising political pressure in this way could potentially irreparably damage the relationship between the Netherlands and its partner countries.

The third risk relates to the repurposing of aid. The VVD advocates for disbursing development assistance for strategic interests, such as improving market access or curbing migration flows, moving away from the DAC definition of “promoting the economic development and welfare of developing countries.” The VVD has even threatened to write its own definition of aid if the DAC does not expand its ODA eligibility criteria to include additional spending on military missions and migration management. The VVD and the CDA intend to use development assistance to tackle the “root causes of migration” in spite of the evidence demonstrating that migration rises as the poorest get richer. These risks weigh heavily on the ability for the Netherlands to remain an influential donor and a strong multilateral player.

There are, however, progressive forces than can act as a counterweight in the debates. In the political sphere, D66 and the social-environmental party, Groen-Links, advocate for reinstating the 0.7 percent ODA to GNI ratio and for intensifying efforts on climate adaptation in developing countries. In the civil society sphere, Partos, the association of 100 Dutch development organisations, as well as the Advisory Council on International Affairs call for the Netherlands to substantially increase its international commitment to deal with COVID-19 and defend the principle that poverty eradication should remain the primary objective of Dutch ODA. In fact, the Dutch public are much more aligned with these ideas. In 2020, only 34 percent were in favour of reducing the amount allocated to development cooperation, compared with 57 percent 10 years ago. Of all the people interviewed, only the supporters of the extreme-right party, the PVV, were largely in favour of aid cuts.

It remains to be seen whether the Netherlands’ future leaders will go against the aspirations of Dutch citizens or preserve Dutch leadership in development policy. Nevertheless, the manifestos of the right-wing parties send worrying signals. While development is not a decisive factor in Dutch politics, the current direction of travel of Dutch development policy would certainly downgrade the Netherlands’ international role and commitment to global solidarity.