Doing the Math on AIIB Governance

The Asian Infrastructure Investment Bank’s new articles of agreement contain a great deal of information about shareholding and governance in the new institution. However, the articles require some additional analysis in order to answer key questions about voting power and board composition. Based on the information provided, we are able to generate voting shares as well as some preliminary conclusions about the composition of the AIIB’s board of directors.

Nonetheless, overall voting power is strongly aligned the principle of weighted shareholding, and China’s large share of AIIB capital translates directly into a large voting stake, followed at a distance by India, Russia, and Germany. Critically, China’s voting power of 26.06 percent is slightly larger than the 25 percent needed to block any decisions requiring a super majority vote (a super majority is defined by the articles to be three-fourths of the voting power and two-thirds of the members). China’s veto power over super majority decisions is a key governance characteristic of the new institution and a measure of the largest shareholder’s power.

But it becomes clear when looking closely at the question of board composition that there are actually four countries that will play an outsized governance role in the new institution. Based on the minimum thresholds set for board seats (6 percent of voting power among regional members and 15 percent among non-regional members), China, India, Russia, and Germany (the four largest shareholders) will each hold a seat, while the remaining countries will need to organize themselves into multi-country constituencies for the remaining eight seats. Non-regional countries are allocated three seats overall, and regional countries are allocated nine seats. As a result, the two non-regional constituencies will represent 9 countries, while the six regional constituencies will represent six countries. 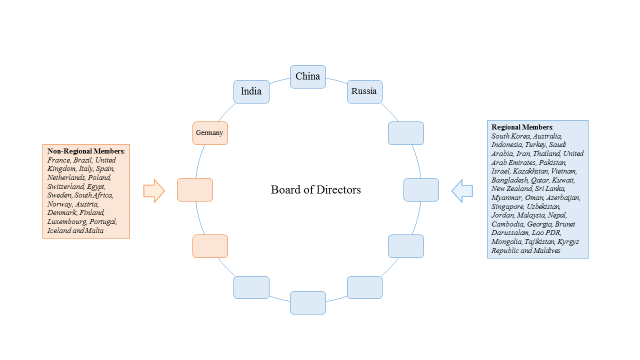