At last week’s Board of Directors meeting, DFC brought forward nine projects totaling US$2.5 billion. As part of DFC’s COVID-19 economic response program, several transactions focus on providing emergency liquidity to banks, with a notable emphasis on the Western Hemisphere. DFC also provided $1.7 billion to energy sector projects in Mozambique—marking the agency’s first big-ticket investment in a low-income country (LIC)—and deployed $6 million in equity across projects in Kenya and Rwanda. A list of recent projects can be found here.

The board also approved two key policies: an independent accountability mechanism and a foreign currency lending policy. Ahead of the meeting, DFC also announced the appointment of its first independent Inspector General (IG), a welcome move—and a particularly important one, in light of the agency’s expanded authorities under the Defense Production Act and recent events linked to an ill-fated Kodak transaction which is now on pause (see our previous commentary on the DPA and the need for an appointed DFC IG here and here).

In this monitor, we look at how the latest batch of projects help shift DFC’s overall portfolio balance towards lower-income markets and examine the agency’s COVID-19 response so far which remain largely focused on the provision of liquidity to financial intermediaries.

DFC approved a total of $3.6 billion transactions this quarter—its largest to date—bringing total approved transactions in 2020 to over $5.8 billion. And with the latest slate of approved projects, the new agency is starting to shift its portfolio balance towards lower-income markets. Though DFC’s significant expansion (by investment volume) into LICs this quarter is driven almost entirely by a single project: $1.5 billion in political risk insurance for an onshore liquified natural gas plant in Mozambique. (See Todd Moss and Katie Auth’s take on the project here.) 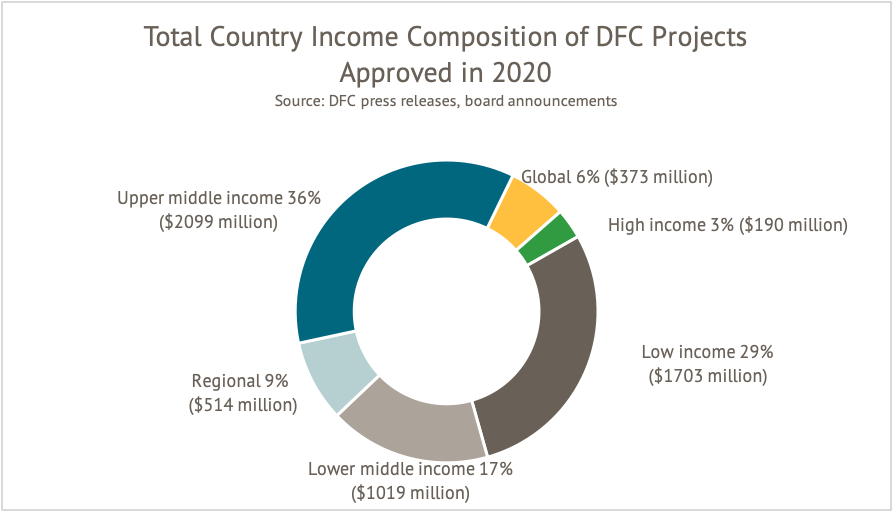 So far this year, over 75 percent of DFC’s 2020 dollars invested in lower-middle income countries (LMICs) are in India and Kenya. By contrast, DFC investments in UMICs are almost entirely concentrated in Latin America and the Caribbean. In total the region makes up around 35 percent of DFC dollars committed in 2020 (the OPIC portfolio was closer to 25 percent). The European and Central Asian portfolio remains the agency’s smallest regional subset. But DFC recently announced the opening of a regional office in Belgrade, so we anticipate this portfolio will grow. DFC also plans to establish a regional team based in Africa, and, while visiting India, President Trump  announced a permanent DFC office based in the country.

In May, as part of its COVID-19 response, DFC launched a $4 billion Rapid Response Liquidity Facility to provide additional financing for existing DFC projects. To complement its economic response, DFC also announced a $2 billion Global Health and Prosperity Initiative to strengthen health systems in developing countries.

It is unclear exactly how many projects have been funded under these initiatives or what is in the pipeline—only one project (a $400 million loan to a Brazilian bank) approved this quarter was explicitly named as being under the Rapid Response Liquidity Facility. However, the latest board meeting did include the approval of a few key investments seemingly aimed at economic stabilization, including $250 million in financing for a systemically important bank in Colombia that will focus on making loans to underserved clients (women, SMEs and mortgage loans for loan income borrowers), $100 million for a consumer financing services company in Mexico that lends to SMEs (with a special focus on women run SMEs), and $150 million to a bank in Costa Rica.  So far this year, 47 percent of DFC’s dollars in have been channeled through financial intermediaries, with the bulk in the Western Hemisphere. The vast majority of these projects focus on meeting crisis liquidity needs.

Scaling up lending to existing clients appears to be a key component of DFC’s economic response. By our count, 13 of 39 recently announced deals are with clients that already have active DFC projects. But as our colleague Nancy Lee points out in her piece on Eight Principles for the DFI Crisis Response, “even in the immediate term, focusing only on existing clients is not enough. DFIs will rightly be judged by whether they reach firms, financial institutions, and countries hit hardest.” Blended finance projects—like the USAID co-financed $14.75 portfolio guarantee to support SME lending and microfinance institutions in West—provide an innovative approach to achieving this reach. Collaboration with DFIs could be another strategy to reach hardest hit markets and populations. As Lee also points out, during a time of crisis DFIs “need to work out equitable plans to share risk and returns in ways that maximize their collective impact, share balance sheet costs, and share pipelines.”

We remain perplexed by how little DFC appears to be doing with other DFIs during this time. DFC could be uniquely positioned to help de-risk and crowd in other DFIs into higher risk projects. As a  member of the DFI Alliance,  DFC participated in a joint statement in April on DFI collaboration during the crisis, so perhaps there are some programs in the pipeline.

Overall, we see positive trends in the portfolio, with some smaller innovative projects, especially across the African continent and in India. With a likely deepening economic crisis globally in the months ahead, DFC will need to take stock of how its crisis response measures have performed to date, scale up the successes, and deepen its partnerships with the broader DFI community.