by
Mead Over
February 19, 2010
This is a joint post with Owen McCarthy. The January 12th earthquake in Haiti is the most lethal natural disaster of the past 20 years. On February 12th, the Associated Press reported that official Haitian government estimates of the dead had been revised upwards, now reaching 230,000 dead. Furthermore, the number could be much higher, since the government admits they have not yet been able to count all the bodies and they have excluded those buried by families or in private cemeteries. As the figure below shows, this new total surpasses the 225,000 dead in the 2004 Indian Ocean tsunami, and dwarfs the death tolls from recent earthquakes in Pakistan-controlled Kashmir and Sichuan, China. 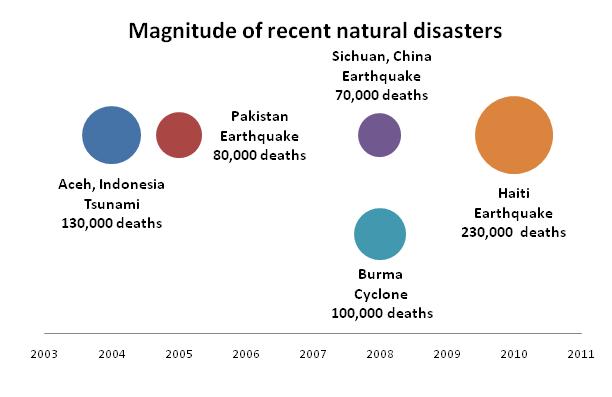 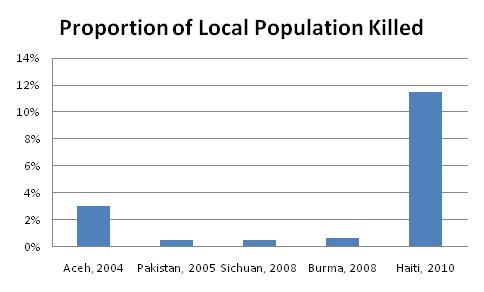 So in relative terms also, Haiti’s earthquake surpasses any of these natural disasters which have occurred in other countries. Finally one can compare the mortality from the earthquake to the mortality from other causes of death which afflict Haiti or have swept the world. The largest cause of mortality in Haiti for the last decade has been the HIV/AIDS epidemic. In 2007, the last year for which UNAIDS has published data, an estimated 7,500 people died of AIDS in Haiti. The earthquake killed 30 times that many Haitians in a few days. Other notable worldwide epidemics have been the bubonic plague in 1350 and the 1918 influenza epidemic. The first killed somewhere between 30% and 60 % of the population of affected European countries and the second between 3% and 6% of the entire world population. Thus for Haiti as a whole, the earthquake has had a mortality impact comparable to the 1918 flu epidemic and for the most affected region around Port-au-Prince the impact is comparable in magnitude to that of the bubonic plague in a less affected country of Europe. Students of the bubonic plague of 1350 believe that its longer term repercussions on society were profound, including a general loss of faith in religion, a loss of respect for hereditary authority in general and the state in particular, the empowerment of the middle class and increases in the ratios of capital and land to labor resulting in increased wages for the poorest. While parallels between that continent-spanning catastrophe and the much more focused event in Haiti are risky, it is not hard to believe that Haiti will be a very different place in ten years than it would have been without the earthquake. Let’s hope that it is a better place, not a worse one. This post was updated on February 4, 2011 here.