This post concludes my report on my trip to Kenya to see M-PESA, the mobile phone--based money transfer service. Here's the full set.

Iqbal Quadir may be the original visionary of mobile phones for the masses in developing countries. In this 100-second clip from his TED talk, he tells how the vision came to him in the early 1990s: 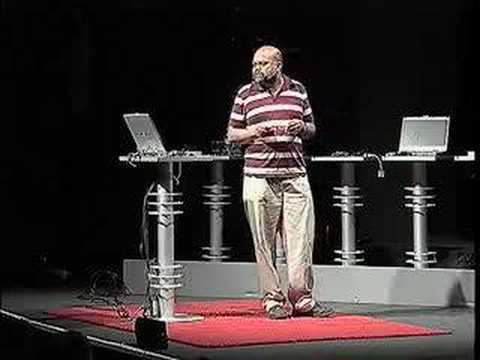 Quadir was seized with the idea of bringing mobile phones to the poor of Bangladesh. In time, he partnered with the Grameen Bank to form GrameenPhone. And the rest is history, in Bangladesh and beyond.

A bit later in the talk, Quadir lays out this causal chain:

Connectivity helps people and firms work together when they are more than a stone’s throw apart---coordinate, bargain, contract. Better communication allows them to reorganize themselves step-by-step into more complex economic arrangements characterized by greater interdependence and specialization. And specialization brings productivity (think Adam Smith’s pin factory). I don't think that's all that connectivity does---it also transmits ideas and culture---but that's a big piece of it.

I had the pleasure of speaking with Quadir at a symposium organized by the Legatum Institute a couple of years ago. In my mind he is the archetypal playwright. Possessed of a powerful vision, he altered the storyline of world economic development. By the same token, he is a man of strong, clear ideas---he told me he could prove in two sentences that foreign aid does not work---sometimes a bit too strong and clear for this natural-born critic.

But as for the impacts of connectivity, I think Quadir has it right. In fact he has articulated something I have struggled to say well. Yes, connectivity is not universally good. If poor people sometimes spend too much on booze and cigarettes, they probably do the same when it comes to talking to friends on the phone. But I think connectivity is inherently good, especially in the forms that have mushroomed in the last 15 years---mobile devices and the Internet---which turn users into active participants.

For me the thinking here is akin to that around the development-as-industry-building rationale for microfinance---really, for financial system development in general. Like financial systems, communication systems interconnect people, thereby creating possibilities too diverse for any one mind to foresee or predict, possibilities that are the essence of transformational economic development. Just as it is reasonable to argue on principle that an intervention that increases the reach, flexibility, and robustness of the financial system generally supports economic development, it is reasonable to argue the same for communications. One can encapsulate the impacts in a theory like Quadir's, but the concrete possibilities are too rich to fully foresee.

Phone-based banking may be one example, one application that Quadir perhaps did not foresee for the revolution he unleashed. Only in retrospect does it seem obvious: the amount of information that one needs to transmit in order to execute a financial transaction is tiny---authentication of the user's identity, transaction type, amount, identity of the counter-party---well within the reach of low bandwidth and primitive interfaces of cheap mobile phones. And in Kenya, in the form of M-PESA, mobile phone--based financial service is itself leading to a rich variety of changes in economic behavior, many unanticipated. Here are a few I learned about while in Kenya last week, all of which arguably exemplify Quadir's maxim that connectivity is productivity: