Last night, the State Department released the latest batch of emails from Hillary Clinton's personal account related to her work as Secretary of State. The bad news: the content appears to reflect limited interest in international development. The good news is that the emails do suggest an early and high level interest in getting USAID to deliver better through improved contracting.

There are 2,221 documents to search. Depressingly few appear to be about development. “USAID” gets you 37 hits (that would be 1.7 percent). “Millennium Development Goals” gets one although “Jeff Sachs” gets four. 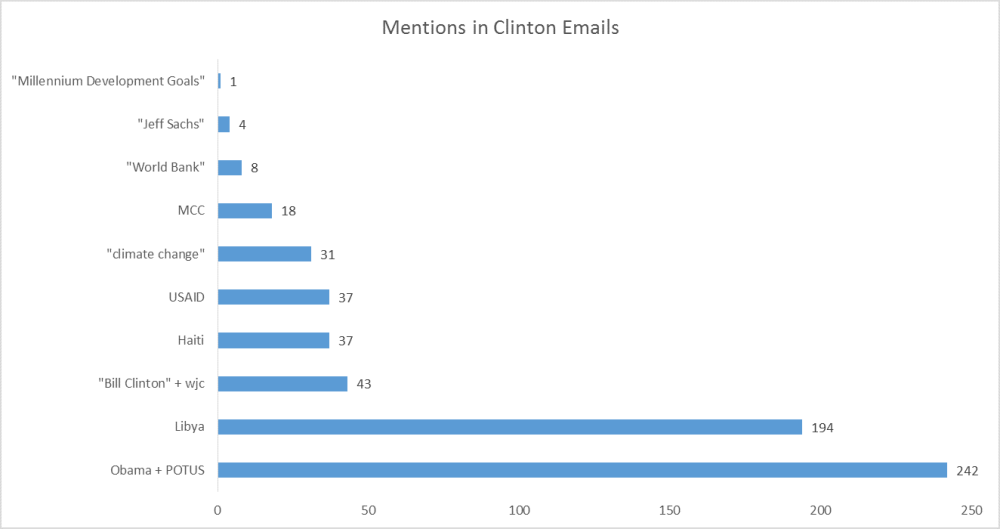 That said, a surprising proportion of the substantive USAID emails are on a very important topic: contracting. In particular, the very first email discussion that pops up in a search for USAID involves a 2009 two page memo on contracting by Middlebury’s Allison Stanger to the Secretary of State.

In 2000, notes the memo, State and USAID spent $1.9 billion on grants and contracts. By 2008, that had climbed to $16.5 billion. “Negative consequences are a private sector that has been granted power without responsibility, a diminished and overtaxed DSS [Diplomatic Security Service?], a demoralized USAID, and looming catastrophe in Iraq and Afghanistan, where reconstruction money first flowed into everyone's pockets except those of ordinary citizens,” suggests Stanger. The first way to deal with the problem is transparency and accountability. Not least: “our anti-corruption efforts abroad will have enhanced credibility when we are perceived to be upholding the same values at home.” In addition, Stanger focuses on contract management: “Restructure USAID so that it has the capacity to manage its contracts as well as write checks.” And finally “craft contracts that employ the foreigners we are trying to help.”

Clinton’s reply to all of this: “Wow — that is worse than I know. We need a full court effort.” And since 2009, USAID under Raj Shah did make a strong push towards contracting reform — not least under the USAID Forward initiative. “This agency is no longer satisfied with writing big checks to big contractors and calling it development” said Shah in 2011.

Today saw the release of the 2015 US aid transparency review, which ranks US agencies that deliver assistance on the quality and extent of their reporting to the International Aid Transparency Initiative (IATI). Suggesting continued progress on contracting transparency in particular, USAID scores 62 out of a possible 100 — ahead of State on 41 and Defense of 23.

But USAID still lags the MCC on 87, and IATI reporting is just the start. There is a long way to go on both transparency and employing local contractors. Vij Ramachandran notes that 92 percent of funds disbursed by USAID in FY2013 for Haiti went to organizations that are based in the US, for example, and data on where the money ultimately went is extremely thin.

The agency could help deal with both its limited capacity to monitor procurement outcomes along with its middling grades on transparency and on reporting on local participation by proactively publishing the contracts it signs. Just like the Clinton emails, USAID contracts should be issued in easily searchable form, but along with metadata that meets the open contracting data standard. Not only would such a move help rocket the Agency to the top tier of transparency next year, there is lots of evidence it will help improve procurement and contracting outcomes, helping the US get more development for the dollar. In particular it would allow civil society here and in partner countries help monitor delivery of contracted and subcontracted services and overcome the weaknesses suggested by Allison Stanger’s email.

State and USAID between them issued $28.2 billion in contracts last year. It would be fantastic to see Secretary of State John Kerry complete what his predecessor started and push contracting reform over the finish line. It would make a considerable difference in how much that $28 billion delivered for development.