This is the last in our three-part blog series on results from our polling experiment with voters and policy elites in Tanzania. Read part I on fuel subsidies and part II on cash transfers.

Even the most ardent defenders of democracy sometimes worry that populist pressure may lead to short-sighted (or populist) economic policy choices — especially in a low-income country in the midst of a resource boom. Tanzania is a good case study: It's poor, had an imperfect but somewhat competitive election last year, and recently discovered large reserves of natural gas. So after polling 2,000 ordinary Tanzanians in 2015 about their views on the use of expected natural gas revenue with our colleagues Nancy Birdsall, Jim Fishkin, Abel Kinyondo, and Mujobu Moyo, we decided to follow up with an experiment polling Tanzanian “elites,” to see whether they are aligned with citizens, or could be swayed by citizens’ views.

Elites are more patient, and more economically nationalist than voters

The results suggest a more complicated narrative than short-sighted voters versus prudent elites. Voters are more eager than elites to spend money now rather than save for the future (more favorable spending on services like health and education, not long-term capital investments). But it is elites that are also more tempted by proposals to use gas for fuel subsidies or relatively high-cost domestic energy projects over selling gas at global prices. And elites are more skeptical than voters of transparency and international oversight of gas revenues. On those topics, not only is the public arguably more prudent than elites, but (at least in our slightly artificial experimental setting) it appears (figures below) public opinion can actually sway elites in a more cautious, economically orthodox direction.

What do we mean by elites? Defining them, much less sampling them, is tricky, so some caution is warranted in interpreting the results. We drew from attendees at high-level conferences on gas policy in Dar es Salaam, and on emails to government ministries, parliamentary offices, think tanks, academics, and industry groups. We would not claim the 125 respondents we ended up with are perfectly representative of government officials or business leaders. Our sample is, however, arguably informative about a relevant group: the self-selected elites who show up to gas policy events at 5-star hotels and take an interest in the topic.

Based on that definition, here's a snapshot of elite versus popular opinion at baseline – i.e., before any of our experimental treatments on either sample. 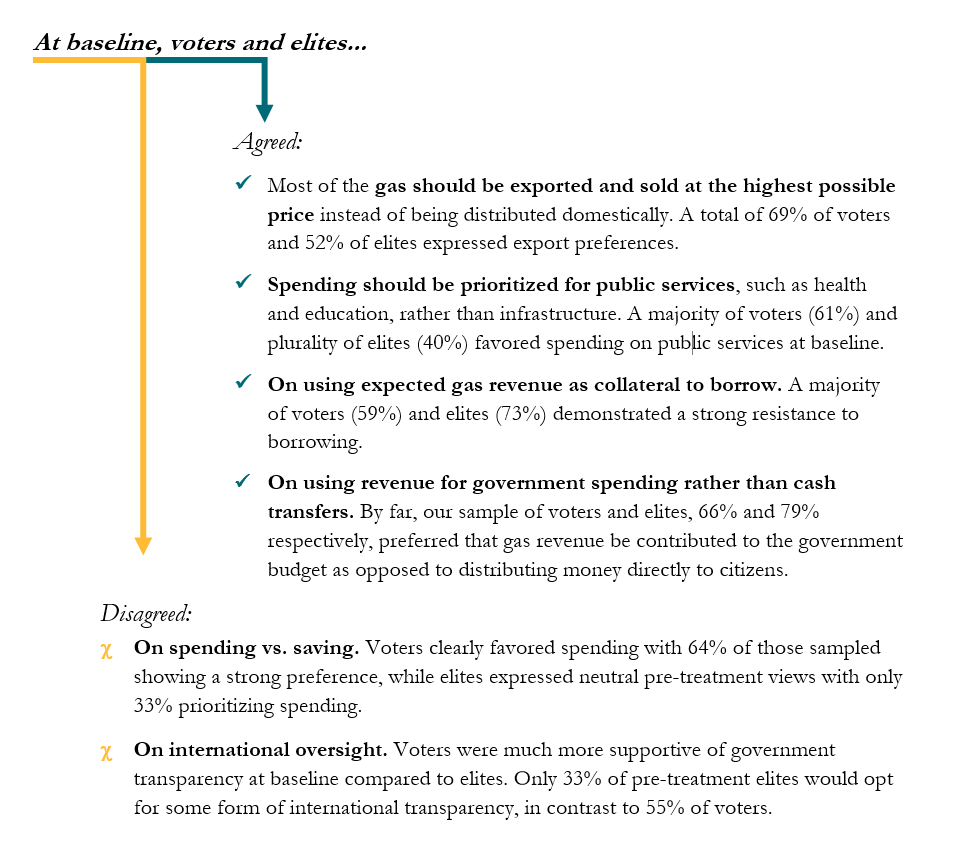 Our earlier posts in this series documented a process called "deliberative polling," in which we collaborated with Stanford University's Jim Fishkin to poll a representative sample of 2,000 Tanzanians, invited poll respondents to collectively deliberate about gas policy issues at a 2-day event with expert panelists and moderators, and then re-polled them. The goal was to figure out what average Tanzanians would think about complex gas policy issues if they took the time to learn about and debate the issues.

Many experts in Tanzania and abroad were skeptical ordinary Tanzanians could or should meaningfully weigh in on gas policy. In addition to seeing how public opinion moved after deliberation, we wanted to find out whether elites care what informed citizens think. So we gave half of our elite sample a preview of informed public opinion—showing them the results of the "deliberative polling" exercise before asking them to offer their own opinions.

The results suggest elites are reasonably responsive to public opinion, at least in these controlled circumstances. (All of the effects shown in the graphs below are statistically significant at the 10% level or lower).

Result #1: Popular opinion swayed elites toward selling gas rather than using it domestically.

This is arguably a case of public opinion pushing elite opinion in the direction of economic orthodoxy.

Given the limited distribution network for electricity in Tanzania, there isn’t significant capacity to absorb a large amount of the gas domestically. As the IMF points out, commercialization would require huge investments in infrastructure and may be overpriced for the Tanzanian market, depending on global price fluctuations. Exporting the gas will ensure that Tanzania collects reliable income that can then be reinvested in domestic needs.

Voters’ preferences for exporting the majority of gas also reflect an outcome from a similar poll conducted by the World Bank and Twaweza, in which 61% of voters “favor gas sales to foreign countries…” 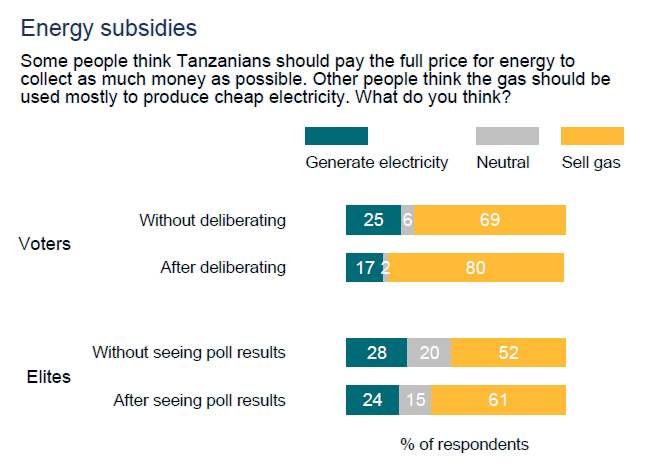 Resource-rich, developed countries are often counseled to store a majority of their resource revenue in offshore accounts, such as sovereign wealth funds, that grow the pool of revenue through investments. (See this recent paper on whether or not Tanzania should create its own SWF). However, Tanzania’s needs are urgent, and an influx of revenue could mean filling budget gaps that would otherwise require international aid or borrowing that leads to more debt. (See Venables 2016). 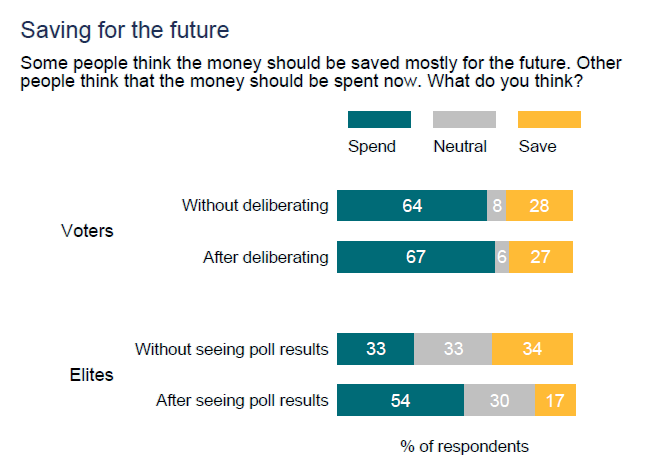 Public needs for better education and health systems are also great and, in this case, may be perceived as more urgent by voters. Although education spending has increased significantly in recent years, learning outcomes have actually gotten worse. According to the 2010 DHS survey, health outcomes have shown progress, such as decreases in child and adult mortality as well as increased life expectancy, but continue to require large investments. 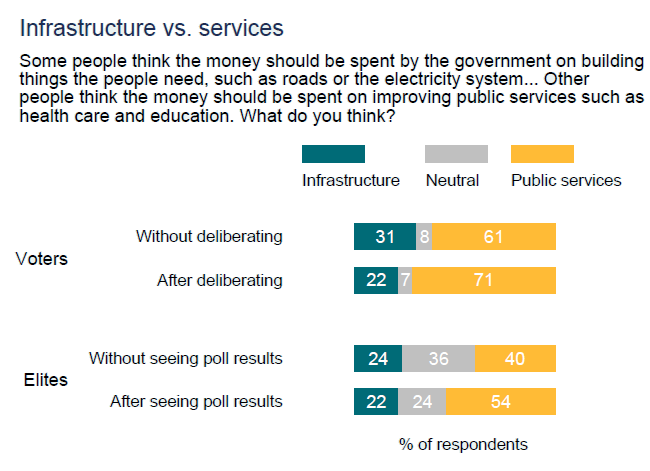 Result #4: Elite opinion was strongly against using gas as collateral for international borrowing, and that view was strengthened when presented with evidence of popular support.

Voters were narrowly opposed to using natural gas as collateral. In contrast, elites expressed a fairly strong preference not to use the gas as collateral, and when shown voters’ poll results, this opposition strengthened. Based on anecdotal conversations with the “elite” sample, we suspect opposition to borrowing is strongly related to Ghana's recent experience of converting an oil boom into a debt fiasco. In anticipation of a large windfall of oil revenue, the Ghanaian government decided to borrow heavily using the prospective revenue as collateral. As global oil prices plummeted, Ghana’s impending boom went bust, urging caution to policymakers in other newly resource-rich countries. 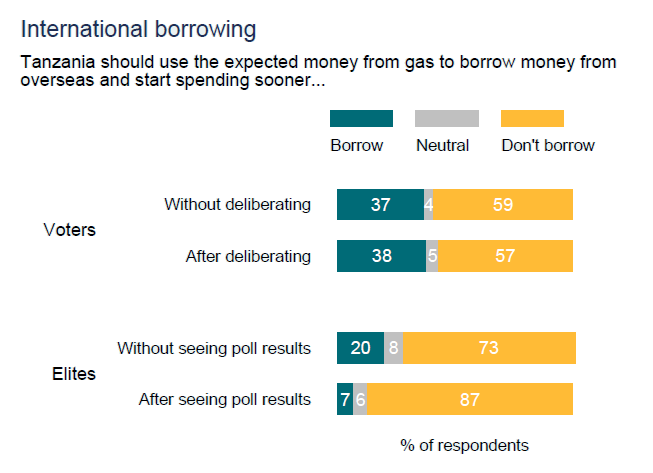 It’s surprising that elites and voters showed such strong resistance to direct distribution. Tanzania’s conditional cash transfer (CCT) social safety net program, TASAF (Tanzania Social Action Fund) has demonstrated remarkable gains in health and education. Other cash transfer models, such as Alaska’s, South Africa’s, and Mongolia’s (which we included information for as part of our deliberative poll briefing treatment to voters) have also had positive well-being and development outcomes. In a previous blog in this series, we explain several theories for this seemingly paradoxical outcome. 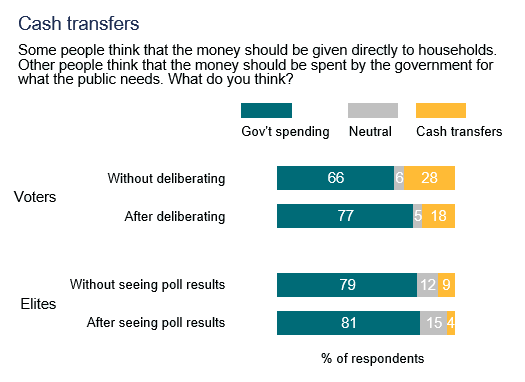 Voters initially showed much stronger support for some form international oversight to manage revenues, while elites were much less skeptical of government management at baseline. Researchers often cite greater transparency as a bedrock combatant of the resource curse, assuming that more transparency – whether in the form of external budgetary review or publishing contracts (which voters and elites both supported quite adamantly) – will lead to stronger accountability between the public and policymakers. This will, in turn, likely decrease the risk of corruption and mismanagement. Groups, such as EITI and NRGI, have made this their calling card mission as a first step in responsible resource management. 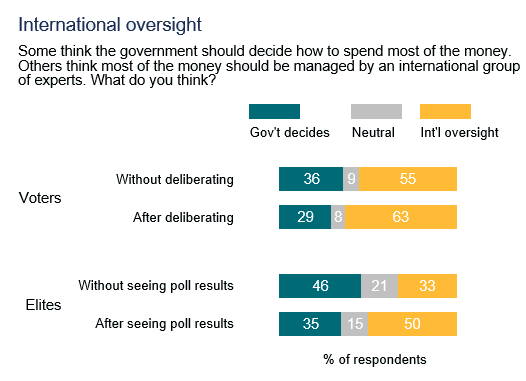 Overall we were surprised by the how much elite opinion shifted in response to public poll numbers. That might imply elites are, in fact, responsive to the public, or that their initial views were weakly held or ill-informed. Alternatively, it might just mean that small cues in a survey experiment have exaggerated effects. Time will tell whether real events in Tanzanian politics resemble our results obtained under somewhat contrived experimental conditions.

Many economists would be disappointed to see how responsive elites are to voter demands for a spending boom, but they might be heartened by elites’ acquiescence to voter preferences to export gas and publish contracts. Democracy is complicated. What seems clear from these results is that neither “listening to voters” or “resisting populist pressures” is a comprehensive recipe for responsible governance of Tanzania’s natural gas reserves.