Last Friday, the Government of Belize alongside the U.S. Development Finance Corporation (DFC) and the Nature Conservancy (TNC) announced the financial close of the largest blue bond for Ocean Conservation to date. The program enables Belize to convert its existing Eurobond (i.e., foreign currency bonds issued on the international market) into blue debt that it will use to implement its national marine conservation agenda. This program is part of a global TNC Blue Bond for Conservation program. If DFC is to be judged on its strategic use of risk sharing tools, its systemic impact on a highly vulnerable country, and its readiness to build a replicable model with a globally respected partner like TNC, this transaction should get a top score.

Debt-for-nature swaps are appealing financing mechanisms that help governments, including highly indebted governments, address several different challenges at once: lowering unsustainable debt stocks and debt service burdens, encouraging private participation in debt restructuring, and incentivizing use of fiscal savings for green (or blue) investments. This isn’t only an appealing arrangement for governments and donors but can also be enticing for creditors who can recoup a portion of their investment.

Debt-for-nature instruments are not new to the scene, but they have gained fresh attention in the context of looming debt crises in many low-income countries and the urgency of the climate crisis. Combining debt relief with climate progress offers an elegant solution to two systemic crises. But to have a systemic effect, they must be replicable and scalable. Are they?

Let’s look at how the debt for marine conservation swap in Belize works. Belize had $553 billion in Eurobonds that were trading at a steep discount. (If a bond is trading below its value, it means the bondholders believe that the creditor will not be able to honor its repayment). The public debt of Belize stood at 125 percent of GDP. Belize and its bondholders agreed that Belize would repurchase the outstanding debt for about 55 cents on the dollar. (Nearly 85 percent of bondholders agreed to the arrangement.) This agreement allowed the government of Belize to reduce its external debt stock by a sizable nine percentage points of GDP. To repay bondholders, TNC issued a blue bond and passed on the proceeds to Belize in the form of a blue loan. DFC then provided political risk insurance to enhance repayment prospects for the new debt, which helped enable an investment grade rating for the TNC blue bond. The government of Belize then used the blue loans to retire the Eurobond at a discount. 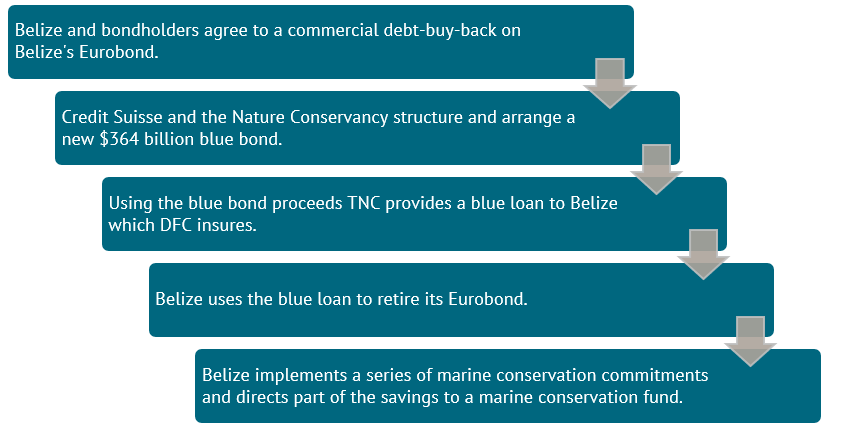 This blue bond program is the largest of its kind to date. Previously, the TNC had worked with the government of the Seychelles on a similar (albeit much smaller) $18 million program that was guaranteed by the World Bank. DFC had also previously worked with TNC on blue bond marine conservation programs for Kenya and Saint Lucia. DFC’s predecessor OPIC provided political risk insurance for a program in Barbados. More broadly, debt-for-nature swaps have been in the mix for some time but their uptake has been fairly limited in scope.

With half of low-income countries in or at risk of debt distress and many of the same countries highly vulnerable to climate-related risks, debt-for-nature swaps and climate bonds once again feature prominently in the debt and climate debate. A key question is whether these type of operations—adapted to different country circumstances as blue or green finance mechanism—could offer a workable and widely applicable blueprint to help countries reprofile or even retire their commercial debt burdens.

But momentum for this type of approach seems to be fraying. The IMF postponed unveiling a debt-for-climate swap program with the World Bank at COP26 due to limited progress on a specific proposal. While there are successful examples of climate debt swaps, they have been small, can have high transaction costs, and have uncertain private creditor interest. The Belize transaction took time to construct, partly because it required building consensus across diverse natural capital stakeholders in Belize, balancing commercial with conservation interests.

But debt-for-climate advocates and naysayers alike should certainly take close look at the Belize blue bond. By virtue of its size, it has considerably improved Belize’s macroeconomic outlook and helped drive an ambitious government-led conservation agenda. This benefit should help dispel the notion that such swaps can only be limited to small transactions or cannot be done in highly indebted countries. Moreover, getting 85 percent of creditors to agree to such a deal is no easy feat: after all creditors did agree to forfeit 45 percent of their initial investment. Skeptics might do well to note the contrast between the Belize success and the very slow pace and scope of debt restructuring under the G20 Common Framework which has yet to complete a successful restructuring. As countries like Zambia struggle with their own Eurobond repayments, might they and their creditors see some appeal in a Zambian Green Bond deal?

Note: On 11/10/21, we edited this blog to correct a numerical error regarding the purchasing of Belize's debt.