Addressing the Risk of Food Price Spikes at the WTO Ministerial

With a decade since the beginning of the major food price spike in 2007, Ministers gathering at the WTO Ministerial in Buenos Aires this week can make a positive impact on people's lives—with an agreement that will reduce the likelihood and impacts of a food price spike.

Higher global food prices can be helpful to developing countries who are often net food exporters, but unexpected spikes push millions of poor consumers into hunger as supply takes time to respond.

Can Ministers repair the roof while the sun is still shining?

A decade on from the 2007 price spike

It’s exactly 10 years since the beginning of the 2007 global food price spike. That spike more than doubled the price of cereal commodities relative to 2000 and, although exact estimates are difficult, the World Bank estimates this pushed tens of millions into under-nourishment globally. In more developed countries too, these spikes added unnecessarily to inflation, making consumers everyone worse off.

That crisis led to several actions by the G20—it instigated the Agricultural Markets Information System to improve information on markets, and avoid panic-driven export bans; it launched GEOGLAM to use satellite data (I never miss a chance for a GEOGLAM map, see below); and in their Communique Ministers agreed to exempt purchases by the World Food programme from “export restrictions or extraordinary taxes.” These were sensible steps forward and, alongside addressing longer-term structural issues, Trade Ministers in Nairobi helpfully agreed to eliminate subsidies on exports (these usually lower prices, but can push them up when removed sharply, as the EU did in the 2007 spike).

Global food prices have been relatively stable and on a downward trend since their peaks in 2011. This reflects the market responding to higher prices, lower energy prices, and increasing productivity. There are no immediate indications (see chart below) of the conflation of factors that led to the 2007 and 2011 spikes. 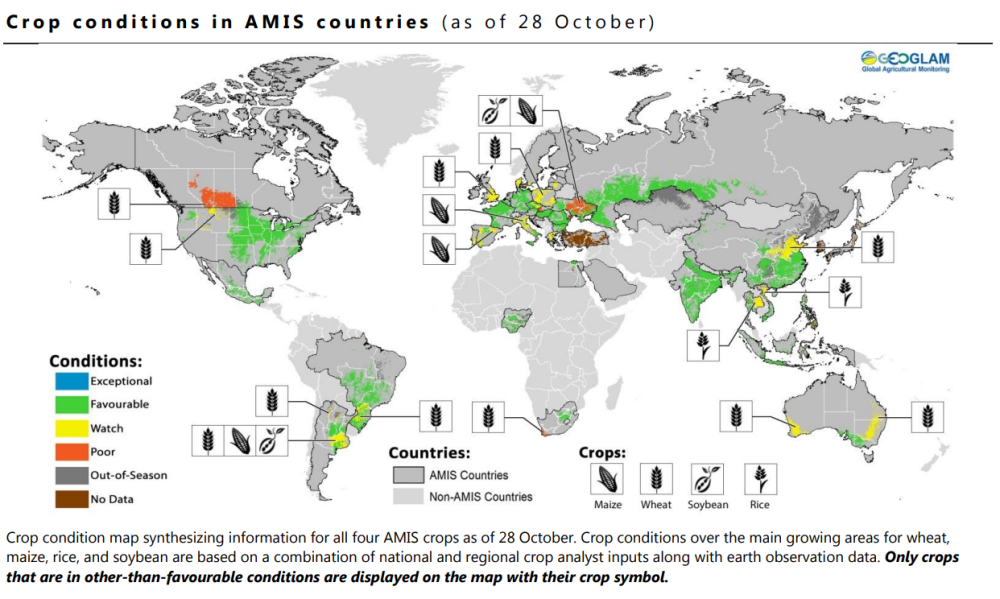 However, a food price spike is always a possibility. The OECD and UN FAO have suggested “a high probability of at least one severe shock to international markets within the next ten years.” Indeed, with a lower commitment to open trade from the US and perhaps others, in an increasingly volatile climate, disruption in agriculture could more quickly lead to nationalistic, and often foolish, policy responses like export bans that were a (and in my view the) major factor in the previous spikes (for more on the effects of agricultural markets on the poor and food insecure in developing countries, check out my colleague Kim Elliott's new blog post).

What can Trade Ministers do about food price risk?

As a start, Trade Ministers should follow through on the commitments many of them made in 2011. Remarkably, one commitment from G20 leaders—for food export restrictions not to apply to purchases of the World Food Programme—has actually been blocked by some of the G20 themselves. This commitment is on the agenda for Buenos Aires as part of a push for improved transparency. There are several other proposals being discussed (and nicely summarised by ICTSD) that can reduce the chance or impact of a food price spike.

These would put a ceiling on trade-distorting agricultural subsidies, and reduce the risk that countries regress into a fruitless “arms race” of subsidising their sectors to compete. Agreement would help keep subsidy focussed in non-distorting areas including funds for public good areas like R&D which are important to resilience and productivity.

This is a long-standing problem—India, in particular, want to buy stocks from their farmers at minimum prices which, if above market prices, can be distortive. Whether this exception can be resolved or extended is a key sticking point. WTO rules don’t prevent domestic food aid to the poor or stock-building providing they are at market prices. Still, public stocks are not usually the food security insurance they may appear to be—often, they are just support to the agricultural sector, or perhaps a second-best to social safety nets, rather than being designed to alleviate food shortages and hunger.

The United States have proposed stronger action for members that are persistently late in their reporting requirements. The proposed penalties are seen by many as disproportionate and possibly even counterproductive but the aim is a good one. Tunisia have proposed all tariffs should be expressed as a share of product value (rather than complex forms which depend on weight, etc).

It’s clear that by subsidising fisheries, countries are exacerbating the incentives to over-fish, and storing up trouble for later as stocks decline.

In addition to these areas, there are other potential areas of valuable progress—including on Cotton, and on ensuring the Nairobi agreement on ending export subsidies is actionable.

Each of these reforms are valuable in their own right, but the improvements to the food system would also make it more resilient.

Some WTO-watchers think the chances of a deal appear unlikely although there is pressure to make progress under the zero hunger goal (2b) to “correct and prevent trade restrictions and distortions.” There are a number of sticking points, for example, on whether agricultural subsidy limits should be measured in absolute terms, or as a proportion of production. Similarly, India’s public food stock-purchase position has long-been unyielding. Still, as one official put it in Geneva recently, “nearly all successful negotiations look unlikely until the last minute.”

Benign global crop conditions mean that this is a good time to address structural issues. Taken together, alongside their other benefits, an agreement in Buenos Aires would mark another important step forward in addressing the inherent and climate-driven unpredictability of agricultural production and reducing the potential impact and likelihood of food price spikes.

So often, international agreements and G20 negotiations seem remote from peoples’ day-to-day lives. But with an agreements that avoid food price spikes and the hunger and inflation they bring, Ministers attending the WTO have a great chance to demonstrate they are making a difference in people’s lives.

I’m very grateful to Jonathan Hepburn at the International Centre for Trade and International Development for advice and comments in putting together this blog post.