The need for refugee resettlement

Today, 1.4 million refugees urgently await resettlement. Unlike the rest of the world’s 26 million refugees, they have been designated by the United Nations (UN) as having vulnerabilities that cannot be addressed in their host countries. They are therefore waiting to be moved from the country hosting them to a third country willing to grant them permanent settlement.

But people are joining this queue faster than they are leaving it. Less than a tenth of these people were due to be resettled this year. COVID-19, and ensuing border closures, will reduce this number even further. The global community is failing in its duty to ensure their safety.

Figure 1. The number and rate of resettled refugees has declined in recent years

These moves are not only good for the resettled refugees, but also for the countries they move to. Numerous studies have found that refugees are more likely to be entrepreneurial, often have higher employment rates than locals, and make a positive economic contribution to their new countries. And, like other immigrants, they can fill jobs that locals are reluctant to accept.

Despite these positive impacts, many countries are failing to make resettlement commitments. Attention has moved squarely to efforts to help refugees integrate in their host countries, which, although important, are not suitable for these 1.4 million people.

In part, the shift away from resettlement is occurring because politicians and the media (even those who are sympathetic) tend to portray refugees as a burden to be shared. Resettlement is seen as an act of generosity. Framed this way, it is natural for countries to reflect what they think they can afford, or look for more cost-effective solutions.

Why is resettlement seen as expensive?

Two factors lead to the perception that refugees are a burden to be shared:

1. The benefits are not as obvious as the costs.

2. The benefits are not inevitable.

On arrival, refugees are always going to need some assistance to help them integrate. If they don’t receive this, they may never reach their full potential. But if this assistance is not sufficiently directed to the barriers refugees actually face then it will not have the desired impact. Lack of finance is not the only problem. Resettled refugees are less mobile (because their assistance is often tied to a location) and their professional skills are often not recognized by local employers. And on occasion, refugee resettlement just doesn’t work out; failure attracts more attention than success.

These two factors exacerbate each other. The lack of investment in refugee outcomes prevents them from achieving their economic potential. This in turn increases the perception that resettling refugees is expensive, which reinforces the reluctance to invest more.

Changing the calculus of resettlement

In a new CGD Working Group Report, published today for World Humanitarian Day, we detail three innovative finance arrangements that could be developed to break this cycle, thereby increasing refugee resettlement and refugees’ quality of life. 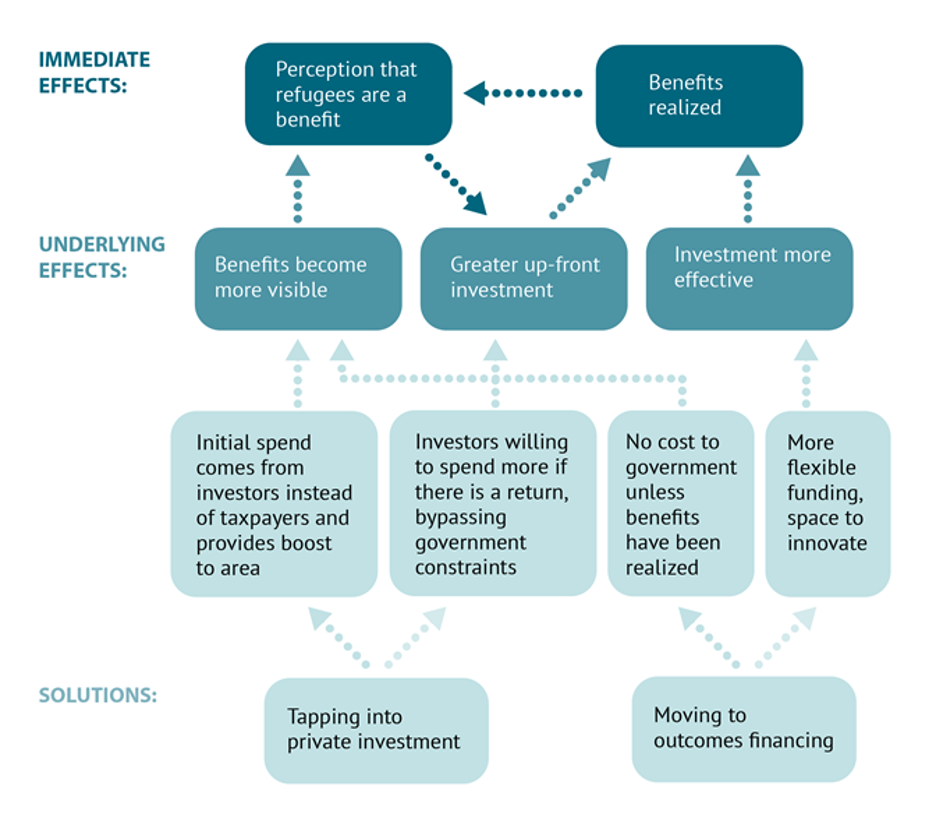 Together, international donors spend roughly US$582 per refugee each year, providing them with aid, food, and shelter, among other things. Given the length of time for which most refugees are displaced, this equals an investment of roughly US$7,500 per refugee. Why not instead commit this money to a fund that could subsequently be used to attract upfront private investment? This investment would be repaid over time—with a return—by a stream of payments from the fund, similar to a bond.

By securitizing legal commitments to pay from multiple sources that are likely to be credit-worthy (mainly sovereign governments) this instrument would have relatively low risk for investors and therefore be able to attract significant investment from a wide range of market actors, at a low cost of capital. A similar model has worked with the International Finance Facility for Immunisation (IFFIm).

2. Shift to an outcomes focus

Often, paying according to inputs can make service providers less adaptable and less able to innovate. Instead, governments could define outcomes that matter to both themselves and to refugees, and pay private sector service providers according to how successfully these outcomes are met. This could give greater freedom to service providers to respond to individual needs, while transferring risk away from the government. One form of this—a social impact bond—has already been successfully used in Switzerland and Finland to increase employment among refugees.

Many refugees have skills and qualifications gained in their home country, but these lack recognition in their new home. This has led to a majority of refugees being overqualified for jobs that they do manage to get. Refugees often lack the assets to invest in this skills recognition, and cannot access traditional lenders due to their lack of credit history.

Some organizations, like Windmill Microlending (previously Immigrant Access Fund) in Canada and RefuAid in the UK, have attempted to address this constraint by providing character-based loans to refugees. These cover the cost of accreditation, exam fees, course material, and anything else they might need to continue to practice their skills. Similar to student loans, these are repaid only according to refugees’ ability to do so, but repayment rates remain high. Experience in Canada suggests that supporting these schemes can yield a high return.

Innovative finance is not the only tool that could help resettled refugees achieve better outcomes and change people’s perceptions. Researchers at Stanford have found that by examining data on refugee characteristics and outcomes in different locations, refugees can be resettled to places in which they are more likely to find employment opportunities.

Nor is increasing resettlement the only way to help refugees. Many might be eligible for other visa categories, or could have employment facilitated through organizations such as Talent Beyond Boundaries. But under the status quo, the scale of resettlement is inadequate. We should be thinking of new tools that could increase willingness to accept refugees.

Using the opportunity presented by COVID-19

COVID-19 has stopped the already slowing rate of resettlement. In March, the UN High Commissioner for Refugees (UNHCR) and the International Organization for Migration (IOM) announced they were temporarily suspending resettlement. As a result, the 58,000 places that had been made available in 2020 will likely go unrealized. This suspension has now been lifted, but travel restrictions remain in place. And the United States, previously the largest resettlement destination, has all but stopped resettlement.

At the same time, COVID-19 has emphasized the importance of immigrants to many high-income economies. Many have a new appreciation for the economic contributions immigrants make, which may have shifted the calculus made above. Yet any future movement must be done in a way that is safe, and controlled, with robust health security checks.

Refugee resettlement is, by far, the most controlled type of migration. People applying to be resettled go through a long and stringent process—a year of countless interviews, submitting detailed information, and biographic checks (for example, see the US process). Adding a COVID-19 test would be simple.

The focus of refugee resettlement must always be on protection, but we should also recognize the opportunity for mutual gain. Finding employment is one of the key priorities for newly resettled refugees. Accepting more resettled refugees during and post COVID-19 would help fill skill gaps in high-income economies, maintain health security, and provide essential avenues for refugees to find safety.