Five Years Later, One Million Refugees Are Thriving in Germany

In 2015, large numbers of refugees fleeing war and terrorism in Syria, Afghanistan, and Iraq arrived on Europe’s shores. Fear and uncertainty reigned—who would give these people asylum and how would they integrate? The German Chancellor, Angela Merkel, remained undaunted. “We can do this!” she announced in August of that year. And do this, they did. In 2015 and 2016, Germany received over one million first-time asylum applications. The EU’s Global Recovery Initiative: A Paper Tiger or the Markings of a Geopolitical Commission?

This blog sets out the EU’s position as an international creditor and offer thoughts for what role the EU could play in debt relief. In the wake of the COVID-19 crisis, many sub-Saharan African countries will face serious economic crises and shrinking public spending. If countries are unable to spend more, they need to spend better. Europe has leading expertise in building institutions for priority-setting in health, making it an obvious potential source for collaboration with the Global South. This is the second of three blogs written by the Center for Global Development focused on the EU’s New Pact on Migration and Asylum. The first focused on why both returns and legal pathways are needed to effectively manage migration. This blog focuses on how to operationalize Talent Partnerships. And the third will focus on how to create a true partnership of equals with African countries of origin. The EU Migration Pact: Why Effective Returns are Necessary

On September 23, the European Commission announced their New Pact on Migration and Asylum, “proposing a fresh start on migration: building confidence through more effective procedures and striking a new balance between responsibility and solidarity.” This focus on strengthening returns and border security is important. But Europe must do more to open up new legal pathways for migration.

The Problem Isn’t that Chinese Lending Is Too Big, It’s that the US and Europe’s Is Too Small

As the possibility of a new Cold War between the US and China gains traction in some foreign policy circles, the scale of Chinese development finance has taken center stage. A closer examination suggests the cost to China of this lending is distinctly underwhelming. It would be cheap for the US and Europe to match China’s lending numbers –and in the interest of global development if it was done right. 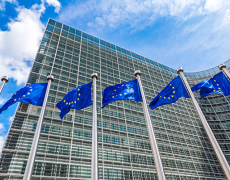 On 16th September 2020, European Commission President, Ursula von der Leyen, delivered her first State of the Union (SOTEU) speech, setting the tone for the rest of her five-year term. With both the United States and China emerging as spoilers in the international system, Africa’s efforts to increase its economic power will only succeed if met with a more expansive European foreign policy, backed by an increase in resources to match such ambitions.

The EU’s New Budget: Europe’s Recovery at The Expense of Its Long- Term Ambitions

After a four day marathon run of negotiations, the 27 Heads of State of the EU reached an agreement on both the Recovery Fund—a large fund to support the post-COVID recovery across the EU—and its new long-term budget and priorities, the Multiannual Financial Framework (MFF) 2021-2027. While leaders across the EU are now hailing the deal as a “win” for their own voters and priorities, inevitably the negotiations were fundamentally driven by domestic interests and priorities, and predictably, international development has suffered as a result of the cuts.