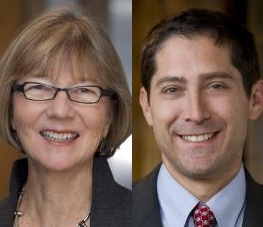 The World Bank and the International Monetary Fund (IMF) are the twin giants in global development and economic and financial stability, shaping the agenda for other international organizations and for governments across the world. What new issues face these institutions in a rapidly globalizing world? How are they responding? In this week’s Wonkcast, recorded in the run-up to the institutions’ Spring Meetings, we consider these questions.

My guests are Nancy Birdsall, founding president of CGD, and Todd Moss, vice president of programs and senior fellow.

On the day of this recording, World Bank president Jim Kim had just delivered an address at Georgetown University in which he set forth his vision for the World Bank, including setting a 2030 target date for an end to extreme poverty around the world.

I start by asking Nancy for her thoughts about the speech—and why demonstrators who once railed at the World Bank and the IMF during the Spring Meetings, and the Annual Meetings in the fall, have been mostly notable by their absence in recent years.

“The World Bank and the IMF have both changed. They’ve adjusted quite dramatically in the last ten years but particularly in the last couple of years,” Nancy replies.

“Jim Kim, in his speech today at Georgetown, talked about inequality – and he used the word injustice –   which is a really different way of thinking about the problems in the global system. Of course, the other thing that’s changed is the rise of the emerging markets, and their more insistent demands for changes at the IMF and the World Bank. We are in a very different world,” she says.

This different world may require that the IMF and the World Bank change even faster than in the past.

I ask Todd about the future of the International Development Association (IDA), the concessional window of the World Bank that lends to the world’s poorest countries. In his Georgetown speech, Kim said that he would seek an aggressive replenishment for IDA, a promise that has been made by each new World Bank president.

Todd says it would be better to begin a discussion about how the role of IDA must change, as many recipient countries enjoy solid economic growth that will soon lift them about the IDA income ceiling.

“The soft loan window has eligibility criteria – usually income – and a lot of countries are bumping up against that threshold,” Todd explains.

“There are now 81 [IDA] eligible countries. We estimate that within the next 10 to 15 years, that number will come down to 31 countries; 25 of those countries will be in sub-Saharan Africa. That is a radical departure from what the world looked like a few years ago and from what it looks like today.”

In the face of this rapidly changing client base, what’s next for IDA? A CGD working group report, Soft Lending without Poor Countries: Recommendations for a New IDA, suggests several alternatives, from  shrinking IDA to redefining its mission, for example, to include financing solutions to problems that transcend national boundaries, what economists call global public goods—most notably the threat of runaway climate change.

Nancy welcomes recent outspokenness on the issue from Kim and IMF managing director Christine Lagarde. Both leaders have urged international action, and both institutions have released major reports: Turn Down the Heat: Why a 4 Degree C Warmer World Must be Avoided, from the World Bank, and a March report from the IMF that found global energy subsidies—almost entirely for fossil fuels—are a staggering $1.9 trillion—about 2½ percent of global GDP or 8 percent of government revenues.

While each country waits for the next to take the first step in addressing this global problem, Nancy says the World Bank can lead by creating new grant instruments—perhaps funded in part by IDA—to push progress on this increasingly urgent issue facing the planet.

(On a more ambitious scale, Nancy and I have co-authored a brief, based on her longer policy paper, suggesting that the World Bank consider creating an entirely new arm to help address non-finance aspects of the global response to climate change.)

In our whirlwind tour of World Bank/IMF issues, we turn next to the seemingly arcane topic of IMF quota reform, a change agreed by all other major countries but held up by the inability so far of the Obama administration to get agreement from the US congress.

Nancy explains that IMF member countries pledge a certain amount of their reserves to the IMF, which the Fund then lends to countries in financial distress. The amount of each country’s pledge, or “quota,” is commensurate to the country’s influence within the IMF.

IMF members have agreed to double their capital commitments to the IMF, to give it the resources needed to address global shocks such as the 2007-2008 financial crisis. As part of the deal, the quotas were adjusted so that big emerging markets countries like China, Brazil and India would have larger quotas and, in turn, greater influence and votes in IMF proceedings, in keeping with their increased role in the global economy.

Todd and I discuss briefly why the US alone has yet to approve these changes.  Nancy underlines why this matters, a point she explained in a recent blog post.

“It’s embarrassing for the US as a fading leader in international development and it’s a failure in safeguarding international financial stability,” she says.

“What this does is expose the dysfunction of our political system at a time when we are losing our leadership at the global level – which is bad for the US, bad for American interests, and bad for the rest of the world.”

This leads naturally to our next topic: the creation of a BRICS bank, a new multilateral institution led and financed by Brazil, Russia, India, China, and South Africa. Why do these countries want to create a new development bank? Would it compete with or complement existing institutions?

Todd says that frustration the BRICS countries feel about the existing institutions is at least part of the motivation. Nancy agrees, adding that the a smaller-than-expected recapitalization of the World Bank (resulting from US unwillingness to back more ambitious funding) and an unmet desire for a stronger focus on infrastructure may also be part of the explanation.

It’s a fast and wide-ranging conversation that covers a lot of ground. I hope you will listen!