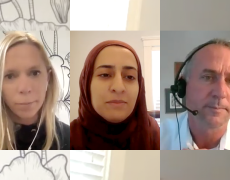 The Future of Education in Afghanistan: Zuhra Faizi and Rob Jenkins on the CGD Podcast

CGD's Susannah Hares speaks with Zuhra Faizi of Harvard and MIT and Rob Jenkins of UNICEF about the history and current status of Afghan education, the role of community-based schools, and what international institutions must do now to keep Afghan children in school.

Stolen Futures – Podcast with Save the Children’s Helle Thorning-Schmidt

3.5 million children around the world are refugees, many with little or no access to schooling. That means we won’t come anywhere near our targets for the fourth Sustainable Development Goal—quality education for all—unless we can address the refugee crisis. Save the Children International president Helle Thorning-Schmidt joins the CGD podcast to discuss how donor countries can help.

The Evidence on Immigrants – Podcast with Cindy Huang and Gaurav Khanna

The Trump administration's signature policy proposal to control immigration more tightly has been the most contentious issue of the early days of this presidency. In this podcast we seek to add some facts to the debate.

Changing the law is a good start, but real progress requires changing minds. On this week's CGD Podcast, former President of Malawi Joyce Banda and FGM survivor Kakenya Ntaiya explain why working with existing power structures is the most effective way to protect girls from harmful practices.

How Can the Brown Education Commission Succeed? – Podcast with Bill Savedoff and Justin Sandefur

For this edition of the CGD Podcast I’m joined by Savedoff and Sandefur (who also leads our education research through the RISE project); they give a sneak peak of their contributions to, and offer an assessment of, the Learning Generation report.

As well as being the beginning of a new year, this is also the start of CGD’s 15th anniversary year, so what better way to kick off than to invite our president Nancy Birdsall to cast her gaze back to 2015 and forwards to 2016.

2015 was a big year for development – and for the CGD Podcast. We brought you key CGD research, spoke to major players in international development, and asked some tough questions: How can we help poor countries in ways beyond aid?

India is a great example of what not to do, suggests Professor Karthik Muralidharan of the University of California, San Diego, a leading researcher on what works – and what does not work – in education in developing countries. Seems strange when you consider Indians head up some of the biggest companies on the planet, including Google, Microsoft and Pepsi. But Muralidharan says these high achievers show up the weaknesses in India’s education system. “The history of education in developing countries has not been about how to educate whole populations but how to channel those who are smart,” he told me in a CGD Podcast, recorded earlier this year.

The Rebirth of Education - Lant Pritchett

My guest on this week’s Global Prosperity Wonkcast is CGD senior fellow Lant Pritchett, whose new book, The Rebirth of Education: Schooling Ain’t Learning, was released last month and is now available on Kindle. The book addresses a fundamental problem in education: despite great progress to meet the 2015 Millennium Development Goal target for primary school completion, students the world over are leaving school having learned very little. “They need to be in school and learn,” Pritchett says. “If you create systems where the only measures of schooling are kids in seats, you’re going to get measures of time served rather than learning gained.”

Overcoming Myopia Before It Kills Us – Ian Goldin

Is it possible to alter national governments and global institutions so that decision makers can focus on the vitally important longer term challenges, while still dealing with the urgent considerations which crowd their daily agenda? That’s the important and difficult question set before the The Oxford Martin Commission for Future Generations. My guest on this week’s Wonkcast is Ian Goldin, director of the Oxford Martin School and the driving force behind the commission.