The SDGs, adopted by 193 nations, weave together social, environmental, and economic goals to provide a global framework for social change that is inclusive and universal. They recognize the interconnectedness of poverty, climate change, quality education, health, and energy for all. The SDGs truly embody Mahatma Gandhi’s vision of respecting the dignity of all, leaving no one behind, and of self-reliance as a key to human dignity.

SDG 5 offers something unique: a focus on achieving gender equality as a catalyst to meeting all 17 sustainable development goals.

While there are several success stories where technology has helped level the playing field and brought economic opportunities to vulnerable communities in India, the question remains: Will technology help advance gender equality, or will it instead fuel a growing gender-digital divide?

Access to technology (including internet access and digital skills) is a key determinant for economic success in India. The country is the IT service industry leader in Asia, and has also been leading on digital infrastructure development with Aadhaar (a biometrics-based national ID system which now enables people who cannot read or write to have a legal identity, bank account, and access to government services) and the India Stack (a digital public goods platform created as a public-private partnership that allows people to leverage technology and advance their in healthcare, education, and many other areas).

And yet, less than one-third of internet users in India are women. Additionally, there is an urban-rural divide with only 2 percent of rural Indian women estimated to use the internet. Looking at Asia regionally, there is a 50 percent gender gap in mobile phone ownership.

What’s stopping us from bridging the gender-digital divide?

A framework to bridge the gender-digital divide: 4 solutions, 5 partners 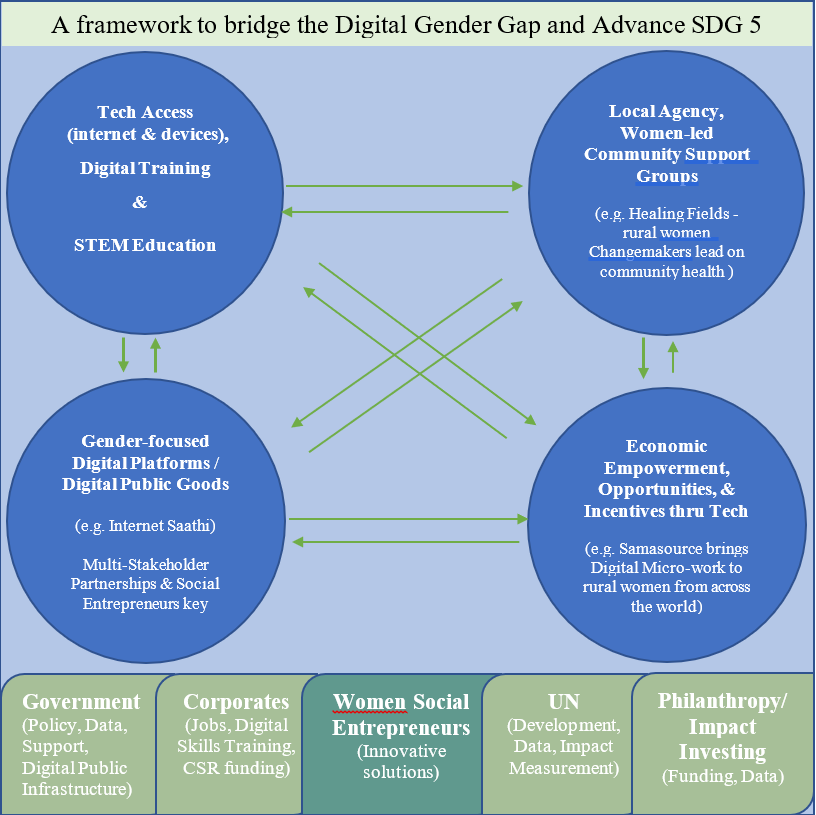 Four solution areas—and examples of where progress is being made

The way forward will require collaboration and analysis

Scaling transformative digital initiatives such as Internet Saathi, Samasource, and ZMQ—which nurture WSE ecosystems across large parts of India—can close the gender-digital divide. It will be critical to take an integrative approach among the five actors coupled with extensive gender analysis to deeply understand underlying constraints, ensure no unintended, undesirable side-effects, and support catalytic WSEs. The recently formed Global Gender Equality Center at Stanford University is planning to do such gender analysis to advance SDG 5 across the world. An army of digitally empowered women social entrepreneurs could help India advance all the SDGs.

We believe tech and WSE-led multi-sectoral collaboration can bring tremendous agency and digital empowerment to hundreds of millions of women changemakers in the land of Mahatma Gandhi—thus enabling India to leapfrog on the digital gender divide and SDG 5 and setting an example for the world to follow.

Radhika Shah is the Co-President of Stanford Angels & Entrepreneurs, Advisor of The SDG Philanthropy Platform, and a member of the CGD study group, Technology, Comparative Advantage, and Development Prospects. Sarah Henry is the Executive Director of the Global Gender Equality Center at Stanford University and Sr. Advisor on Gender at the Bill and Melinda Gates Foundation. Ashit Patel is the Director of Software Engineering at Salesforce.com.