Women Are Not All Born Equal—And It Matters

‘What works’ depends on ‘for whom,’ so why aren’t we paying attention to women’s different socioeconomic levels?

Late last year CGD launched Revisiting What Works: Women, Economic Empowerment and Smart Design, an update to the United Nations and ExxonMobil Foundation’s report Roadmap for Promoting Women’s Economic Empowerment. The report identifies how development actors can make their interventions aimed at improving women’s economic outcomes more effective, emphasizing the need for design features to help women overcome gender-specific constraints. In addition to providing tips for smart design, the report (and its predecessor) stresses the importance of acknowledging and addressing heterogeneity among women: the fact that the effectiveness of interventions will vary depending on whether intended beneficiaries are poor or non-poor, farmers, entrepreneurs or wage workers, young or adult. This blog post takes a deeper dive into women’s specific situations, and in particular their socioeconomic levels, as an important factor for consideration when seeking to both improve and measure economic outcomes.

Marty Chen, Harvard University, reinforced this same point during her remarks at the last CGD Birdsall House Conference on Women:

The original Roadmap and its update group women into three broad socioeconomic categories: ‘very poor,’ ‘poor,’ and ‘non-poor,’ using both individual income-based specifications and occupational and other features. 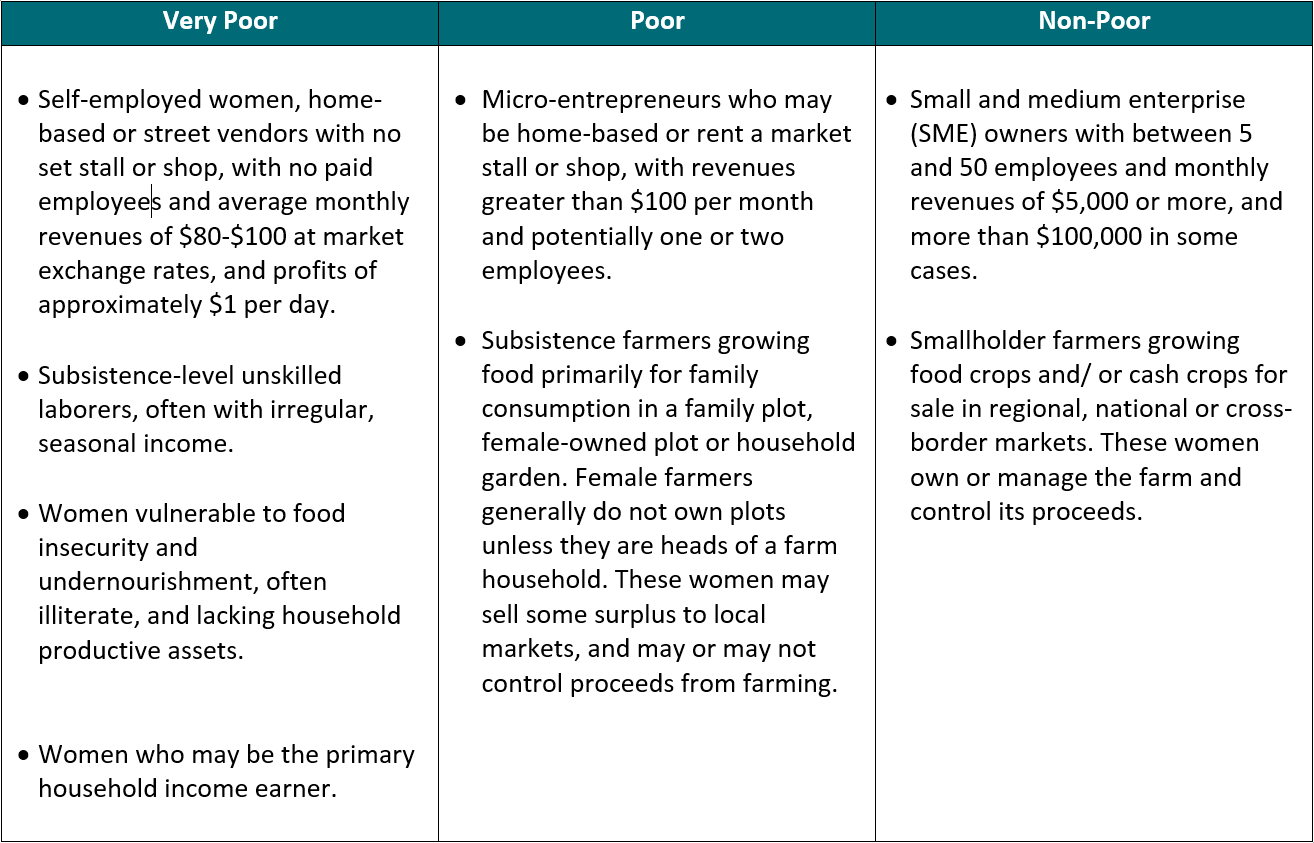 Using these categories, we investigated how many of the 92 evaluation studies we reviewed for Revisiting What Works (including some meta-analyses, which we broke down by study) focused on the ‘very poor,’ ‘poor,’ ‘non-poor,’ or some combination of the three. Including studies from meta-analyses, we ended up with a total of 166 studies. The studies were all selected because they were rigorous evaluations (with natural or statistical controls) of interventions designed to improve individual economic performance and income, and where women were all or more than half of those in the study sample.

We found that most studies, covering a variety of interventions, focused on a mixed group of clients or beneficiaries followed by more or less equal numbers focusing on only the ‘poor’ or only the ‘very poor.’  As expected, there were very few studies focused on the ‘non poor’: 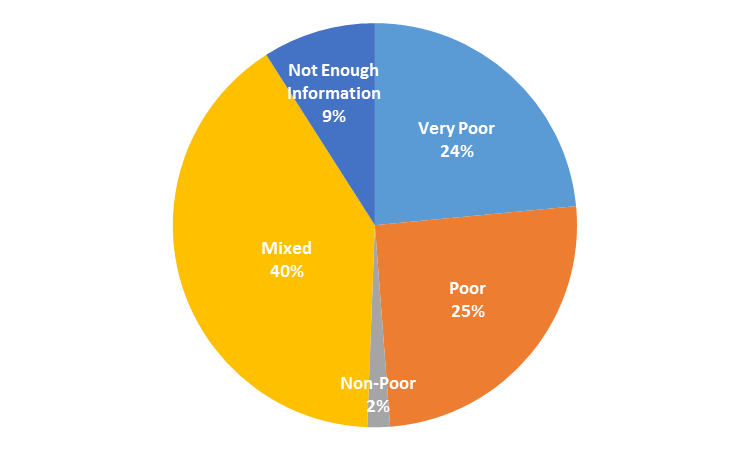 Nearly all studies evaluating child care interventions (6 out of 7 studies) and networks and mentors (20 of 38 studies) targeted beneficiaries of different income groups (‘mixed’) suggesting that there is demand for them from women across different income groups (and that these interventions could be scaled to entire populations). Interestingly, networks and mentors-oriented interventions also had the highest percentage of studies targeted to the ‘very poor’ (14 studies). Microcredit was the preferred intervention for the ‘poor’ (with 17 studies).

Equally important, we also took a close look at how these income categories were defined in the studies.[1] As shown in the chart below, 53 percent of studies did not provide any insight into their samples’ income category using monetary data (e.g., any description of consumption, earned revenue or profits, or savings), and only one-fifth of studies provided monetary data at the individual (rather than the household or village) level.

Another 42 percent of studies provided other descriptive statistics (e.g., ‘subsistence farmers’), while 11 percent failed to provide any justification of income category, merely asserting that a sample was composed of ‘poor’ women, for example, without giving any facts or descriptive features backing this categorization. Finally, 16 percent of studies failed to mention the income categories of those in their sample at all (though some of these studies referenced other characteristics, such as whether women were living in rural versus urban areas, or had access to electricity, authors provided too little detail for us to feel comfortable choosing income categories for their samples).

View our spreadsheet for further details on each study

In terms of specific examples, a study by Brune et al. (2013) explains that their sample lived on less than $1.48/day, putting the study in the ‘monetary data’ category in the chart above. Valdivia (2013) too has a very specific description of his study sample, specifying that monthly earnings averaged around $740/month and that some women earned as little as $140/month. Some studies provide other details to hint at the target population’s poverty level: Ekobor-Ackah et al. (2014), for example, explain that the sample’s participants are beneficiaries of Ghana’s Livelihood Empowerment Against Poverty program, in which the government identified the bottom 20 percent of the country’s ‘mega poor’ households. Finally, a study by Austrian and Muthengi (2013) describes its sample as vulnerable adolescent girls. Authors provide information on age, religion, household demographic makeup, and whether household members have radios or cell phones, for example. But these characteristics—while they may hint at socioeconomic status—do not provide clear enough evidence of specific income category.

Vague or non-existent income definitions are problematic, as they prevent us from getting a clear idea of target populations, and thus from understanding exactly what works for whom. It may be the case for some or many of these studies that the data on the sample’s socioeconomic level is collected and analyzed but is not reported in the published work. This is equally problematic. Researchers—as well as project implementers—need to collect and report on income data (and additional individual-level data, as needed) and be specific in their descriptions of target populations. This will enrich our understanding of effective interventions and encourage accountability—ensuring that projects are reaching their intended targets and that the impacts of development investments are maximized.

[1] For this analysis, we did not examine the additional 74 studies contained within meta-analyses.