Will the UK Labour Party’s Big Idea of an Inequality Target Help or Hinder Development?

The UK Labour Party recently set out its ideas on international development in a paper titled “A World for the Many, Not the Few.” There is much to like in the policy paper, including pledges to put in place an effective whole-of-government development approach, to advance DFID’s monitoring of whether aid reaches the most vulnerable and excluded, and to communicate more honestly with UK taxpayers about the successes, challenges, and complexities of development.

But its core innovation is a proposed change in legislation to add reducing inequality to the required criteria for aid spending (alongside reducing poverty), while at the same time “reducing the importance of GDP growth.”

Jonathan Glennie, Director of the Sustainable Development Research Centre at Ipsos, offers a helpful mental model for the difference between reducing poverty and inequality:

Imagine two cars racing, one substantially ahead of the other. Now imagine the slower car speeding up—that’s poverty reduction. . . . If the car in front goes even faster—that’s widening inequality.

As Branko Milanovic has highlighted, global inequality has grown over two centuries, driven largely by inequality between countries (to use the racing cars analogy, if we imagine country populations are teams of cars, the largest gaps opened up between the teams of cars, with teammates bunched up together, rather than between cars on the same team). Since the 1980s, emerging economies have started to close the gap with richer economies through sustained economic growth, at the same time that inequality within some countries has widened. As levels of poverty have fallen faster than ever before in human history, there are fewer cars travelling at extremely low speeds.

In “A World for The Many, Not the Few,” Labour states that it would adopt a standard metric to assess progress on national inequality. The risk is that this metric will, perhaps inadvertently, characterise hundreds of millions of people who would be considered poor by rich-world standards as getting too rich too quickly. With poverty and global inequality still stark—700 million people remain in extreme poverty (below $1.90 a day) and the majority of the world’s population lives below $10 a day—should the UK really be shifting its focus away from poverty reduction, national development, and broad economic growth towards tackling inequality within poorer countries?

The Sustainable Development Goals includes a target on national inequality which, in motor racing terms, divides each country’s population between 10 cars and focuses on accelerating the last four cars to close the gap with the pack ahead. “A World for the Many, Not the Few” argues for “raising the bar on SDG Goal 10” by focusing on the gap between the last four cars and the car at the very front of the team (this is known as “the Palma ratio”: the ratio of income between the richest 10 percent and the poorest 40 percent of the population). The paper says that a Labour government would adopt this as the metric for assessing progress on inequality by its development partners. It would encourage all countries to pledge to halve their Palma ratio by 2030 and achieve a ratio of 1 by 2040 (Sweden, Denmark, and the Netherlands each have a ratio of 1).

The chart below shows the income levels of the top 10 percent and the bottom 40 percent together with the Palma ratios for 12 of the 20 largest recipients of UK bilateral aid.[*] 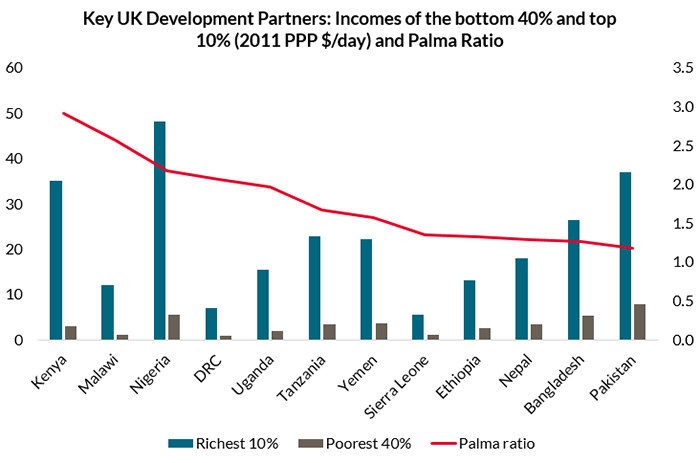 The data shows that the poorest people are very poor, with average consumption amongst people in the lowest decile in DRC, Ethiopia, Kenya, Malawi, Sierra Leone, and Uganda less than $2 per day, and in the other countries a dollar or two more. But people in the top decile are not recognisably rich. In DRC and Sierra Leone, the richest 10 percent of people consume on average less than $10 a day, a level considered impoverished in rich countries. In Ethiopia, Malawi, Nepal, and Uganda, the mean of the top decile is only a few dollars more (these are purchasing power parity dollars, so it is not that the cost of living is less). In Bangladesh the mean income of the top decile is 20 percent less than the Asian Floor Wage, which its promoters argue is what a worker in a garment factory with a dependent family should be paid to have enough to live on (this tells us something about why living-wage campaigns have been so intractable, but it also makes clear that the threshold of the richest 10 percent in Bangladesh is a long way from the global elite).

The chart below shows income by decile for the same set of countries, with the UK included. In none of the 12 countries is the average income of the top 10 percent higher than the UK’s minimum wage. 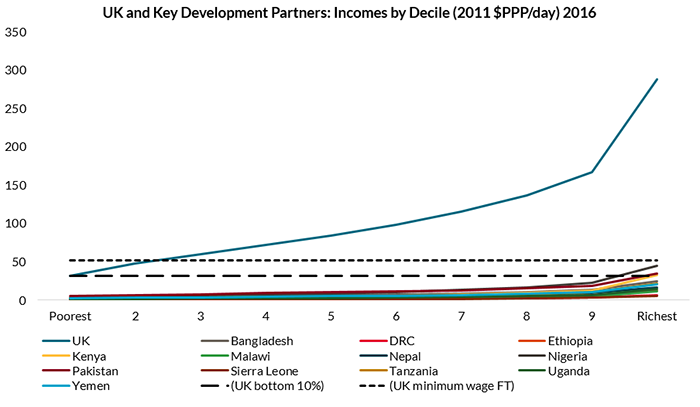 It is notoriously difficult to assess income distributions (particularly at the very top of the range), and some of these measures rely on surveys that are several years old. Still, the overall pattern is clear: while there will be a small proportion of very rich people at the top of the distribution, there will also be many more people within the top 10 percent earning less than the mean.

Lant Pritchett points out something similar in relation to the quality of education globally. In most developing countries it is not that “the rich get a good education and the poor get a bad one” but “the rich get a bad one and the poor get none at all.” For example, in standardised educational test scores, 15-year-old students from Thailand, Mexico, Mauritius, and Chile fall below the 20th percentile of students in Denmark. Students from Qatar, Ghana, Saudi Arabia, and El Salvador fall below the 5th percentile when compared to their counterparts in Australia.

“A World for the Many, Not the Few” argues that “what people need and want in the UK, people need and want everywhere: our needs, our rights and our struggles to achieve them are one and the same.” Yet at the same time it suggests a development target which counts improvements in the living standards of people who would be considered amongst the poorest in the UK as eroding progress, suggesting that their advancement should be slowed down. What moral authority can the UK have to tell people whose incomes are barely comfortable, and whose priorities are overwhelmingly for jobs and economic growth, that their ambitions and aspirations should be put on hold in pursuit of “happier and more harmonious societies”?

There are certainly reasons to be concerned with inequality within countries. Angus Deaton argues that we should view inequality not so much as a cause of economic, political, and social processes, but as a consequence. Some of these processes are good (areas of economic growth in poor countries), some are bad (uneven access to opportunities), and some are very bad indeed (extractive political institutions and monopoly rents). He argues for sorting the good from the bad in order to understand inequality and what to do about it. As Nancy Birdsall highlights, a rising number of people with steady jobs, a secondary education, and a stake in rule of law and protection of private property rights is a development good, not a development bad, not only for those people directly, but because growth of a middle class in emerging economies has been intimately linked with poverty falling.

DFID should support efforts to address damaging causes of inequality—rigged markets and politics, rent extraction, lack of political voice and agency—and work to increase the productivity and market power of the poor and the emerging middle of workers, traders, and consumers. But if DFID manages-to-the-metric, it might mean refusing to support any investment that would have a first-round effect of increasing incomes in the top decile, including improving the lives of Malawians earning more than $10 a day or Sierra Leoneans earning over $5. It might also mean prioritising projects supporting the 40 percent poorest in Kenya over the poorest 40 percent in the DRC, because even though they are richer, their country’s Palma ratio is higher.

More broadly, the goal of achieving some mathematically Scandinavian level of equality in poor and middle-income countries, and the general disparagement of economic growth in the paper, suggest a zero-sum view of prosperity, which is not in line with people’s aspirations, or their possibility. As Simon Maxwell notes, the paper focuses on the “narrative of predation” but misses out on a companion “narrative of accumulation,” by which countries and people prosper: trade, technology, migration, and mobilisation of finance. Migration, probably the most powerful lever that developed countries for enabling poorer people to improve their lives, barely gets a look-in. As E. Glen Weyl highlights, much migration exacerbates inequality both in sending and receiving countries, and yet reduces global inequality. It is a difficult political issue, much harder to communicate than the story of venal global elites, and it is a gaping hole in Labour’s articulated vision of a fairer world.

Domestic taxation, public services, and redistribution are important, and the consensus, (including from researchers at the IMF) is that moderate redistribution does not impede growth. But it is easy to fall into an overoptimistic vision of what can be achieved through taxing the rich and domestic redistribution. The truth is the many are too poor, the middle too few, and the elite just too tiny for evening up income levels while “reducing the importance of GDP growth” to be the answer for broad prosperity in poor countries.

[*] Where data is available. I also left out Jordan and Lebanon because a large proportion of aid to those countries is focused on refugees rather than on the general population.