Will Brazil Retreat from Its Role in International Development?

Brazil’s newly elected President Jair Bolsonaro has been characterised as an unsavoury anti-globalist—so, will he unwind Brazil’s progress as a development actor over the last two decades? Below, I will highlight Brazil’s important contributions to international development, and argue that Bolsonaro’s best bid to eliminate corruption, restore trust in government institutions, and reinstate the country’s path of prosperity is to finalise Brazil’s OECD membership—becoming its second biggest member by population—while also strengthening partnerships and commitments to fast growing markets in the Global South.

Bolsonaro takes charge with a nationalist and anti-corruption agenda

On October 28, citizens in Brazil went to the polls to elect their new president in a run-off election. Jair Bolsonaro of the Social Liberal Party (PSL) won 55.1 percent of the vote and on  January 1, 2019, he will replace Michel Temer, who is leaving office with current approval ratings of just 2 percent. Far-right Bolsonaro (Video portrait NYT) has won a lot of support among people fed up with escalating criminality and staggering corruption among high-level politicians, including former president Lula da Silva.

After years of domestic political turmoil and economic deadlock, Brazil has the opportunity to relaunch its foreign policy and role in the global economy (CFR, 2017). Yet, Bolsonaro appears to be an anti-globalist at heart (ISPI, 2018). While still little is known about Bolsonaro’s true intentions regarding Brazil’s foreign relations, he campaigned on slogans suggesting a downright retreat from international commitments and a strong focus on domestic policies.

The evolution of Brazil’s role in international development

Brazil has stepped up its role in international development over the last 20 years, especially during the presidency of Lula da Silva of the Workers Party (Partido dos Trabalhadores, PT), from 2003–2011. While most people probably associate Brazil with its influential United Nations Conference on Environment and Development in 1992 (Earth Summit) and the United Nations Conference on Sustainable Development (Rio+20), it has also been growing its presence in other areas regarding international commitments to development like research cooperation and peacekeeping operations.

It was mainly former president Lula da Silva who set up a new and ambitious strategy in supporting other developing countries in its economic and social progress. Its aim was to establish and pursue a distinct “South-South Co-operation” (SSC), as it is also promoted by other BRICS countries which include China, India, and South Africa. Brazil’s Cooperation Agency (ABC – Cooperaçao Técnica Brasileira) states that its cooperation is demand-driven and “offers solutions tailored to beneficiaries’ needs” (Cabral et al. 2014).

Aid, in the sense of traditional DAC donors, has not been a primary aim of Brazilian development cooperation. Brazil is characterized as a partner rather than a donor and has been a recipient of Official Development Assistance (ODA) over many years. By 2013, Brazil’s development cooperation was present in 159 countries, totalling an overall disbursement of about 1.5 billion USD from 2011–2013. Fifty-three percent of funds is spent on contributions to international organizations. Regional, historical, and cultural ties to former Portuguese colonies and to Latin American countries drive Brazil’s technical cooperation (Semrau and Thiele, 2017).

In 2013, Brazil spent about $23 million USD on educational cooperation, which primarily supports foreign students to study in Brazil. It invested 1.66 percent of gross domestic product (GDP) on science and technology cooperation, and had a similar level of spending on R&D as Russia (1.12 percent) and Italy (1.26 percent), but far from countries such as such as China (2.08 percent) or Germany (2.85 percent) (IPEA, 2017). The focus is on supporting a wide range of research collaborations and joint laboratories, especially in agriculture (e.g., the Embrapa-Labex programme).

Brazil’s humanitarian cooperation commitment is shown by agreements and partnerships with international organisations to deal with food and nutritional security hazards, risk management, disaster risk reduction, and also the support for refugees (IPEA, 2017). Brazil’s refugee protection legislation demonstrates its strong belief in the multilateral rules framework and the protection of human rights. Recently, Brazil took a leading role in accepting thousands of Venezuelan refugees (56,000 since 2014) that have been fleeing from an ongoing economic crisis and political turmoil. President-elect Bolsonaro, however, assured to make border policies towards Venezuela more restrictive (AS/COA, October 18, 2018).

Brazil actively supports peacekeeping operations and its institutional foundations. According to IPEA (2017), the design of the UN Peacebuilding Commission (CCP) was strongly influenced by Brazil. In 2016 Brazil contributed financial resources of $55.9 million USD to UN Peacekeeping operations, comparable to countries like Denmark and Austria. Brazil deployed 1,729 armed forces personnel in UN peacekeeping missions in 2013 , making it 19th among the 122 countries that were contributing troops (IPEA 2017), a number that is down to currently 274 (48th).

Brazil’s trade relationships will be important to re-establish the country on a path of growth and prosperity. Figure 1 below plots total trade of Brazil with selected trading blocs. OECD countries are by far the largest trading partners (even if the US is subtracted). Brazil became a key partner of the OECD in 2007 and has intensified cooperation ever since. It requested to become a full OECD member in June 2017.

OECD membership is not only likely to foster trade and bolster investment, but would also have beneficial effects on other aspects of Brazil’s economy and governance. In particular, the OECD uses specific instruments to fight transnational corruption, implemented in the OECD Anti-Bribery convention of which Brazil is already a party. It would further improve the business environment, tax compliance, and help to establish an effective and sustainable pension system. Such steps would all be in line with Bolsonaro’s pledge to fight corruption and support for a more efficient government administration.

Brazil’s single most important trading partner is China. Even trade with all Mercosur countries (Argentina, Paraguay, Uruguay) is lower than trade with either China or the United States. How Bolsonaro will treat Brazil’s relations with China is both important and hard to predict. Given the importance of China as a trading partner—and particularly for Brazil’s agricultural sector that supported his campaign—Bolsonaro will thus likely be cautious in making bold decisions regarding the BRICS association despite him insinuating to withdraw Brazil from the association (AS/COA, October 18, 2018).

Dismantling Brazil’s commitment towards the BRICS might jeopardize trade relations with China and gave China even more weight and influence within the association. Brazil, together with its democratic partners, India and South Africa, institutionalized in the IBSA Dialogue Forum, would do good to balance the power of the authoritarian regimes within the BRICS, China, and Russia. 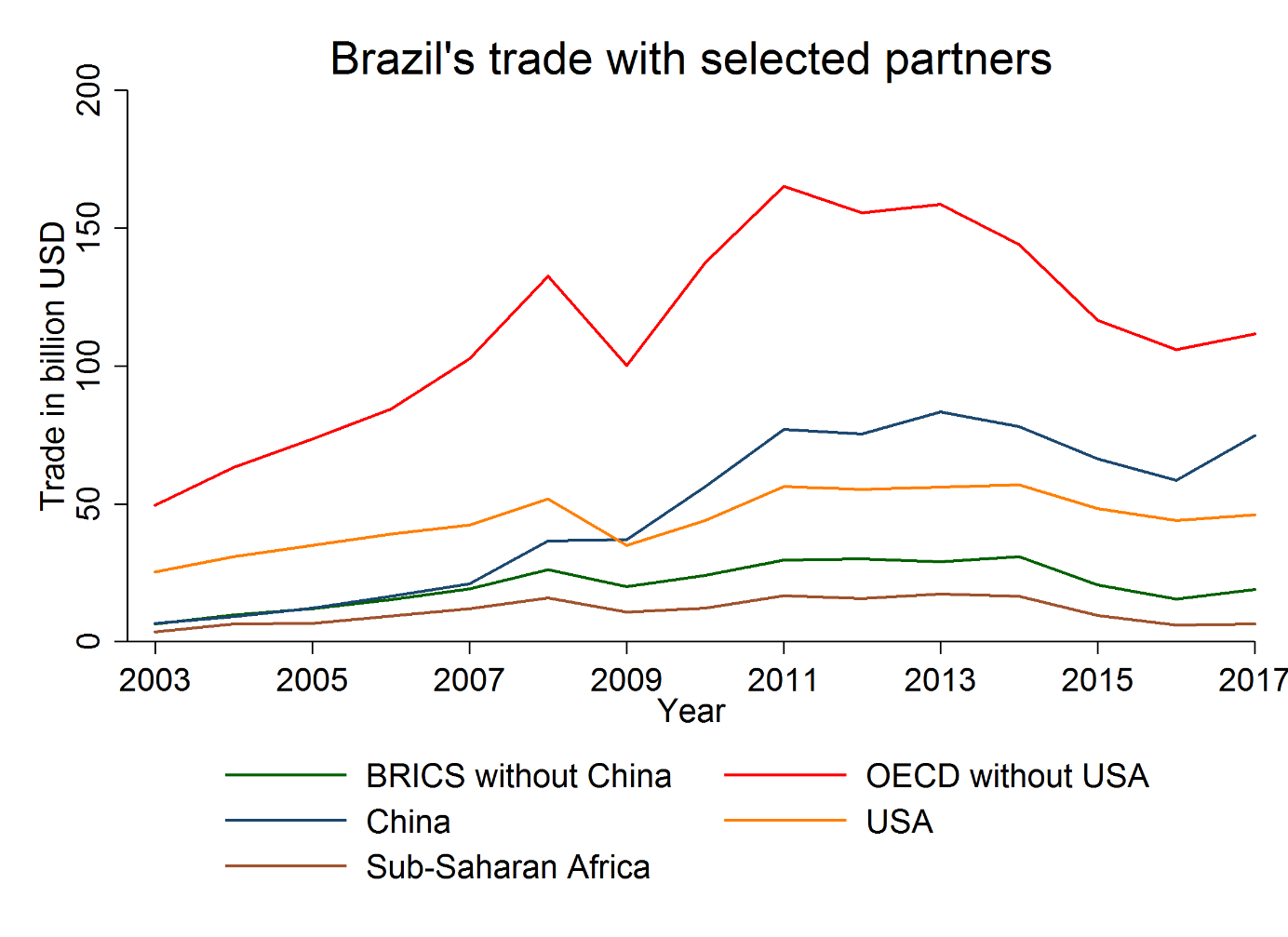 Former president Lula da Silva’s legacy of strengthening ties with lower income countries especially in sub-Saharan Africa is likely most at risk. Neither Bolsonaro’s nationalistic rhetoric nor commercial interests seem to suggest that he has any interest in strengthening these partnerships, which have been an important part of Brazil’s development cooperation. Trade with sub-Saharan countries is still low and decreased further during Brazil’s economic crisis.

Despite his offensive statements, Bolsonaro pledges to be both democratic and constitutional in his leadership (Watch his victory speech). It remains to be seen whether he will protect values enshrined in the constitution that highlight cooperation among peoples for the progress of humanity. The international community and people of Brazil should make every effort to keep him accountable on these terms.