Whose Climate Finance is “New and Additional”?

In 2020 we passed the deadline for developed countries to jointly mobilize $100 billion a year of climate finance for developing countries, agreed at the 2009 Copenhagen Climate Change Conference. The 2015 Paris Agreement—which the US recently re-joined after dropping out during the Trump administration—endorses that target. Today, we release a policy paper that considers how much of climate finance could be “new and additional” as the original commitment envisaged, and how much each country has contributed.

Measuring climate spend is difficult as definitions of what qualifies are unclear and contested. Given these difficulties, instead of looking just at how much new climate finance has been pledged, we take a step back and look at countries’ total development finance over the period. This enables us to identify how much the overall envelope has grown, and therefore the ceiling on what could be classed as additional. This finance includes all climate and non-climate spend, including aid and multilateral contributions, but also export credits and loans that don’t qualify as aid.

Our analysis shows the value of total development finance increased by $43.6bn from 2009 to 2018—so, this is the maximum amount that could be classed as “new and additional.” Set against the OECD’s estimate that climate finance has now reached $78.9bn, this shows that almost half (45 percent) of that amount was not additional, and largely came from the re-badging or re-focussing existing development efforts. Several countries—including Canada, Spain, and the US—actually reduced their finance levels over the period.

The $100bn target and additionality

In 2009, developed countries committed to “mobilizing jointly $100bn a year by 2020 to address the needs of developing countries,” and this was reaffirmed by Article 9 of the Paris Agreement in 2015.

It seems clear that the $100bn was intended to be additional to existing efforts. The original Copenhagen Accord (2009) agreed “the collective commitment by developed countries is to provide new and additional resources,” the Cancun Agreement (2010) reinforced this, and the Paris Agreement confirmed that “mobilization of climate finance should represent a progression beyond previous efforts.” Some providers have argued (though not publicly that we can see) that the “new and additional” provision only applied to the initial Fast-start Finance of $30bn for 2010-2012. However, agreements adopted by parties to the UNFCC since 1992 have been consistent in agreeing additionality as a condition on finance, and the proximity in the text of the Copenhagen Accord of the phrases “new and additional” and “$100bn commitments” suggests to most countries and observers that the former clause applies to latter. If the intention was to re-focus existing development finance on climate, then the agreement could easily have said so (or the parties could have clarified this intention in the 11 years since Copenhagen).

Is Climate Finance Towards $100 Billion “New and Additional”?

We therefore define “new and additional” as the increase over existing financing efforts in 2009. To be as inclusive as possible, we include all publicly provided development finance (even where this is lending or exports credits that do not qualify as aid), and the OECD’s estimate that $14.6bn of private climate finance has been mobilized. In this respect, our estimate of $43.6bn new and additional finance is as generous a ceiling as possible.

So, which countries have contributed more?

We also look at the breakdown of the additional funding by country and by type of finance.

Table 1. Total development finance in 2018 (countries with change over $1bn) 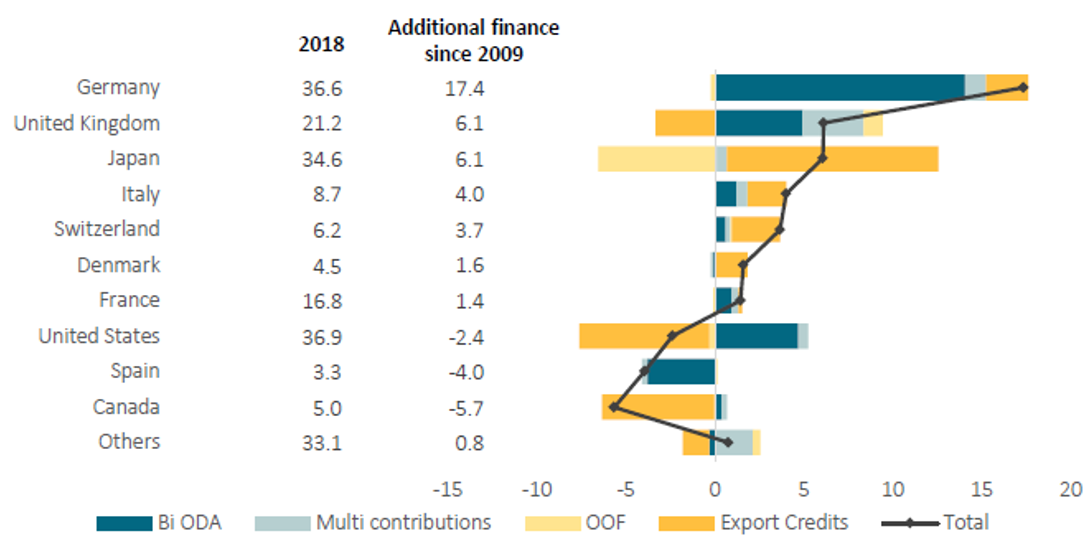 Several countries, notably Germany, the UK (before its proposed aid cut), Japan, and Italy increased their total development spending by more than $4bn (in the last two cases, mainly through export credits). Still, France only provided an additional $1.4bn, Spain’s fell, as did Canada’s (due to export credits, though more concessional spending barely rose). The elephant in the room is the US—it helped instigate the $100bn target and accounts for over 40 percent of “developed country” output (and emissions)—but its contribution also fell by $2.4bn over the period.

There were limited new financial commitments in 2019 and 2020, so this picture will not change with the latest data. While in 2021 some, including France, are stepping up their aid, others, like the UK, are substantially reducing it.

Where next on climate finance?

In the coming year, as the host of the Conference of the Parties to the United Nations Framework Convention on Climate Change, the UK has made development finance one of its priority areas.

Our analysis makes clear that many countries have so far made no meaningful additional contribution on climate finance; and they should do so. The current target runs to 2025—so clear and decisive plans are needed, particularly for the US. Amounts are not all that matter, and we’ll have more to say on principles for how this money should be spent for best effect shortly.

Officials will start work on defining a new collective target for 2025 onwards from “a floor of USD 100 billion per year.” As part of this effort, they should rectify problems with the previous target, with a clearer sense of the target’s objective, but also its baseline, measurement, accountability for progress and the incentives created (we’ll also have more to say on this in coming months).

If developed countries expect lower-income countries to measure and achieve stretching and costly domestic climate mitigation targets, they will surely need to set a better example in their own commitments on finance.