The UK government is currently identifying reductions that will reduce its aid budget from over £15bn in 2019 to £10bn for 2021-22. The Foreign Secretary will lead a cross-government review of the allocation of aid (official development assistance, ODA), and he has rightly indicated that this will consider evidence on impact and value for money. One key source of information is the 79 reviews of the aid watchdog, the Independent Commission for Aid Impact (ICAI).

In this blog we update our previous analysis which quantified the aid spend directly evaluated and graded by ICAI across different government departments. We find that across all ICAI reviews, 74 percent of UK aid is assessed as providing a positive contribution–but this varies widely by department. Under 40 percent of ODA spent by the Business Department (BEIS), the (then) Foreign and Commonwealth Office (FCO), and the Home Office was scored positively; whilst the same figure for the (then) Department for International Development (DFID) was 74 percent.

These percentages hide variation within projects, but ICAI’s samples have covered a substantial portion of departmental spend; and they provide an important guide to impact.

Aid budget to fall by over a third

The UK government’s one-year Spending Review was released on 25th November. This confirmed the government will drop its commitment to spend 0.7 percent of GNI on ODA, which has been cut to 0.5 percent until “the fiscal situation allows” a return to 0.7. The Spending Review provides £10bn for ODA in 2021-22: a fall of over a third on 2019’s £15.2bn ODA budget.

Last year, we presented our analysis of the performance gradings of UK aid spending awarded across all ICAI reviews published between 2011-18, which also enabled a departmental breakdown. This work analysed the spending samples used in ICAI reviews (including cross-Departmental reports) to calculate the percentages of each department’s ODA-spend achieving a Green, Green/Amber, Amber/Red, or Red grading. The first two grades indicate a “positive contribution,” whilst the latter two mean improvements are required.

In this blog, we update our analysis.

Evaluating £35bn over the last decade

ICAI’s reviews are likely to be focussed on areas of greatest concern; and as a guide to overall impact of the UK aid budget, they are likely to be unduly pessimistic. Still, they do provide a floor, and are reasonably consistent in their scoring approach over time (see our previous paper for a full discussion).

Since our last analysis, ICAI has published fourteen reviews (nine of which graded the spend assessed) which directly evaluated £6.92bn of UK aid spending (£5.27bn graded). Of the graded reviews, two covered ODA spent by BEIS, two covered the FCO, and one the Home Office. The focus of ICAI’s reviews remained on DFID, however, which accounted for 92 percent of the ODA spend directly evaluated and graded. In September the FCO and DFID merged to create the Foreign Commonwealth and Development Office (FCDO) – although two graded ICAI reviews were published after the merger, they relate to the prior period and we have therefore presented results according to the historic Department structure.

ICAI review scores and what they mean

Overall, however, nearly three quarters of UK aid was assessed as Green/Amber or better (Table 1). Considering all ODA scored by ICAI between 2011-20 (£27.13bn directly evaluated across 67 graded reviews), 74 percent was awarded a Green or Green/Amber grade.

Our previous analysis (2011- 2018) suggested 79 percent was Green/Amber or better–the slightly lower updated figure could reflect a greater recent focus from ICAI on weaker programmes. In any case, both analyses relate to multi-year spending and so are unlikely to be a reliable guide to changes over time. Still, both are consistent with around three quarters of aid being positively spent.

ICAI’s new reviews also allow us to update our results on the departmental performance in ODA spending between 2011-20 (Chart 1), full results here.

ICAI’s scrutiny has understandably focused on DFID, the UK’s largest ODA-spending department. As DFID’s share of UK aid spending has fallen, ICAI has sought to examine other ODA-spending departments in its reviews: including BEIS, FCO, the Home Office, and the Department for Health and Social Care (DHSC). Some reviews assessed spend across multiple departments and our figures reflect that.

Over the last decade, 74 percent of DFID’s ODA-spend was graded by ICAI as Green/Amber or better. The same figure was 37 percent for BEIS, 19 percent for FCO, zero percent for the Home Office, and 100 percent for DHSC (we only consider Departments spending over 1 percent of UK aid and so exclude Defra, DIT, and others). Combining the spend of DFID and the FCO to reflect their merger into the Foreign, Commonwealth and Development Office, 73 percent was evaluated as positive. 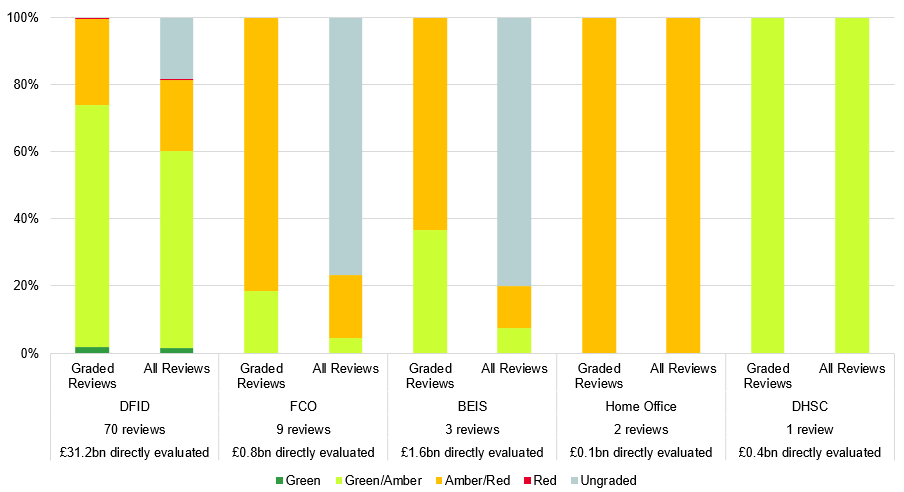 Note: "Reviews" refers to those where department’s aid spending was evaluated. Some ICAI reviews evaluate spend in multiple departments so the number of reviews reported in Chart 1 exceeds those of Table 1.

The BEIS figure of 37 percent reflects the combination of its positively scoring climate finance spend; and its much-weaker research spend. The former scored positively in 2019 and also while it was part of The Department for Energy and Climate Change in 2014, while the Newton (research) Fund received an Amber/Red last year and the Global Challenges Research Fund had a critical (ungraded) rapid review in 2017.

Whilst there are only eight reviews whose lead department is outside of (then) DFID, ICAI’s reviews have directly evaluated over £3.5bn of aid spent by these departments’ (relative to total spend of just under £19bn in the last five years). The analysis assumes that ICAI’s grades are reliable as a guide to impact–whilst this could vary, we think that the large number of ICAI reviews and the relative consistency in scoring approach means that broad comparisons across departments are valid.

Implications for the Foreign Secretary’s review

The newly-formed FCDO has been given power over the inter-departmental allocation of 93.5 percent of UK ODA. Now that the Spending Review is complete, the Foreign Secretary will run a process to review how ODA is allocated across departments. Given steep cuts to the UK aid budget, the above evidence can inform the Foreign Secretary’s decision on which departments can have their ODA budgets reduced whilst improving the quality of UK aid spending.

The Foreign Secretary’s assessment will no doubt draw on more detailed and up-to-date analyses of the programmes that ICAI has assessed (see our colleague Ranil Dissanayake’s recommendations to do that, including some overlap in the conclusions in terms of weaker spend). Still, the Foreign Secretary should also take account of historic departmental performance in allocating that spend.

*Note: Some ICAI reviews evaluate spend in multiple departments, so the number of reviews reported in Table 2 exceeds those of Table 1.