Which G-20 Nation is the Most Upstanding Global Citizen? A New Ranking Dares an Answer

In 2001, when the Center for Global Development was founded, it was conventional to conceive of the world as split between the rich and the rest. Not long before, the Jubilee 2000 debt cancellation campaign had reached its boisterous and righteous climax, with the G-7 club of wealthy nations “enhancing” the Debt Initiative for Heavily Indebted Poor Countries. The Kyoto Protocol of 1997 drew a sharp line between “Annex I” industrial nations and the rest of the world. China’s economic output barely exceeded California’s.

CGD’s Commitment to Development Index embodied and promoted this dichotomous world. It rated and ranked how much the policies of a club of 21 wealthy nations supported prosperity elsewhere. The conceptual split wasn’t perfectly clean—on which side of the divide did Iceland, Israel, and Saudi Arabia belong?—but it was useful. 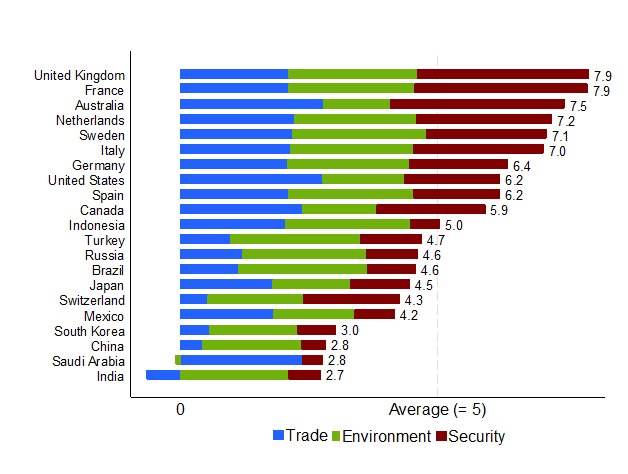 The shock of 2008 punctuated the long-term erosion of that global split. Soon, few populous nations will have a GDP/capita below $1,000. China has become a significant donor, especially in Africa, as well as the world’s largest greenhouse gas emitter. Economic policies of developing countries drove the build-up of capital account surpluses that contributed to the financial crises in the United States and Europe.

As part of CGD’s adaptation to a changing world, I compiled a CDI-like index for a G-20–like group of countries: an Index of Constructive External Engagement (ICEE). It asks not what your country has done for the poor, but what your country has done for the world. Metaphorically, the conception of citizenship expands beyond giving to charity, to participating in the array of institutions that make a society work for all—voting, paying taxes, respecting the law. The implicit desideratum is a just, durable, and prosperous global order.

But if the framing for the ICEE is broad, the way I constructed it is narrow-minded. I assembled a list of the 21 largest economies; relative to the CDI, this adds Brazil, China, India, Indonesia, Mexico, Russia, Saudi Arabia, and Turkey. Then I extended those parts of the CDI to these countries as data availability permitted. Four of the CDI’s seven components fell by the wayside: aid, investment, migration, and technology. Three remained: trade, environment, and security. The result is just a first step in a new direction, meant to provoke discussion on what it means for a nation to be a good global citizen, and how the most powerful nations measure up. 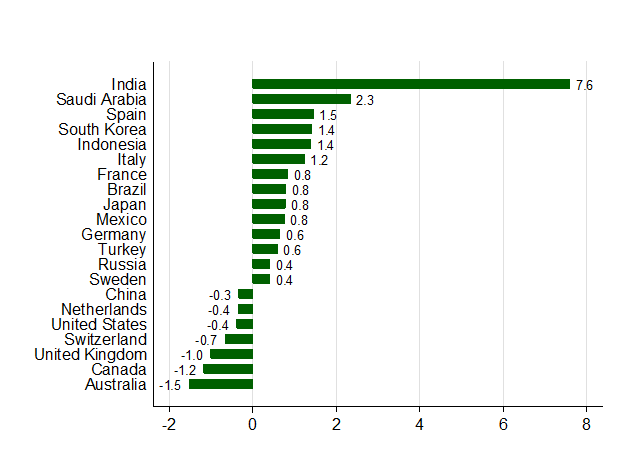 According to the ICEE at least, wealthy nations are doing more to open their borders to trade, reduce their impact on the environment, oceans, and forests, and contribute to international peacekeeping. (See the two graphs below.) The United Kingdom and France essentially tie for first while India is in last place. However, looking at changes over the last decade flips the findings: poorer nations have done more to increase their constructive external engagement. India has gained by far the most, thanks especially to trade openings, while major nations such as the United States and United Kingdom have slipped slightly, mainly because of the historical fading of internationally sanctioned peace- and war-making operations in the former Yugoslavia.

Most of the data and calculations behind the ICEE are in public files. I hope others will take this work as a starting point and push it farther.