Where Is Mobile Money Making the Biggest Difference for Financial Inclusion for Young People?

The ability to make payments on a mobile phone has transformed peoples’ lives, especially in developing countries. Building financial payment systems on the back of rapidly proliferating mobile phone networks has overcome the constraints imposed by the brick-and-mortar banking system and—where adequately flexible regulatory regimes exist—allows mobile money providers to be much more innovative than traditional banks in extending services to people in remote and underserved areas. But what lies ahead for mobile money and its applications for financial inclusion? That may depend on who is using it.

Who is using mobile money?

Figure 1. Probability of having a mobile money account by age 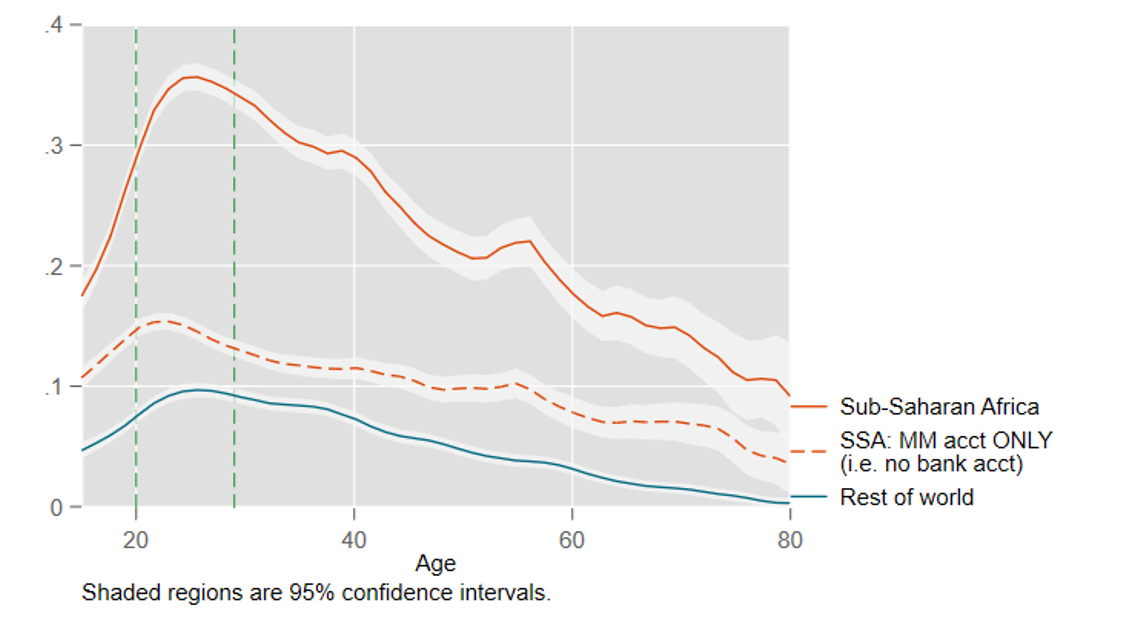 (Note: all graphs and statistics are generated using population weights.)

Where mobile money is most important

Young people are already using mobile money at higher rates, and because they are likely to be relatively new to the work force or pursuing education, we can expect that they will extend their use of mobile money into their full careers. Mobile money has numerous business and governance use cases: it facilitates transactions, enables saving and credit products, and simplifies taxation for governments—all at scale and much faster than brick-and-mortar financial networks. Accordingly, we can expect that the countries where mobile money is making strong inroads among young people have a high likelihood of sustained integration into their financial systems over the next several years.

So where is mobile money most important for people in their twenties? There are a couple ways to get at this question. First, we can look at adoption rates. Figure 2 shows the proportion of people with a mobile money account on the horizontal axis, with the proportion who are financially included exclusively via mobile money on the vertical axis. The further up a country is, the more relatively important mobile money is for financial inclusion. Unsurprisingly, sub-Saharan African countries stand out—with Kenya, a mobile money success story, dominating for general penetration. But while Kenya may have higher overall rates, mobile money is bringing higher proportions of people under the financial inclusion umbrella in countries like Gabon, Tanzania, Uganda, and Zimbabwe. 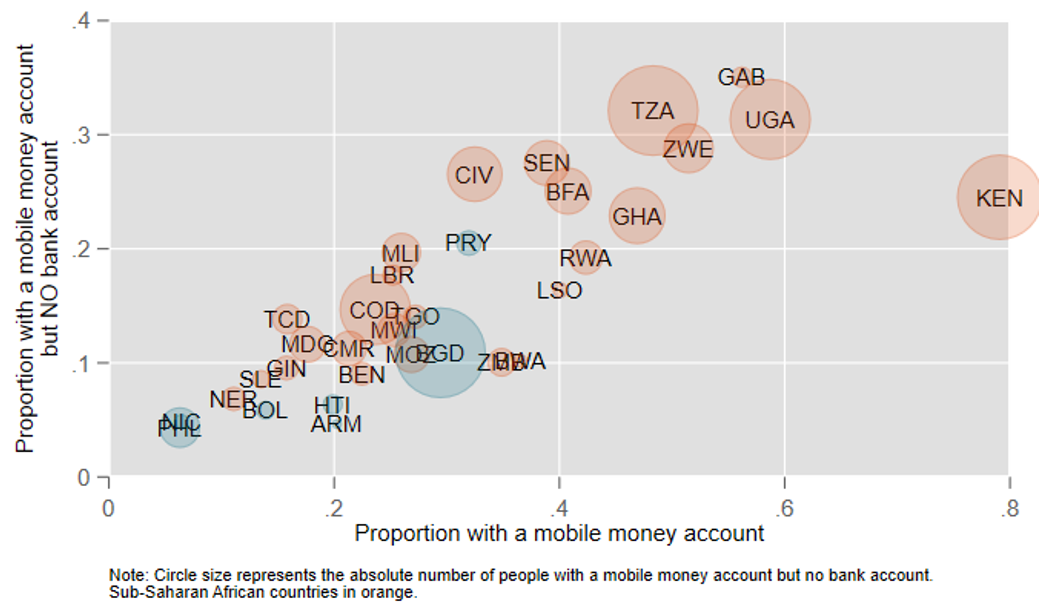 It’s not just higher rates, either. The areas of the circles in figure 2 are proportional to the population size represented by the vertical axis—the bigger the circle, the more total people who rely on mobile money exclusively for their inclusion into the banking and financial system. Tanzania, Uganda, and Bangladesh all have about as many (or more) people as Kenya for whom mobile money is their only access to finance.

Next, we can look at the relative importance of mobile money for financial inclusion—that is, the percentage of the financially included people in a country for whom mobile money is their exclusive entry point. Figure 3 shows the top 15 countries ranked according to this metric. While countries like Côte d’Ivoire, Mali, Senegal, and Burkina Faso are relatively small markets by population, mobile money is responsible for over half of the financially included people in their twenties. Notably, the only country outside of Africa on this list is Paraguay.

Figure 3. Mobile money’s contribution to financial inclusion for people in their twenties 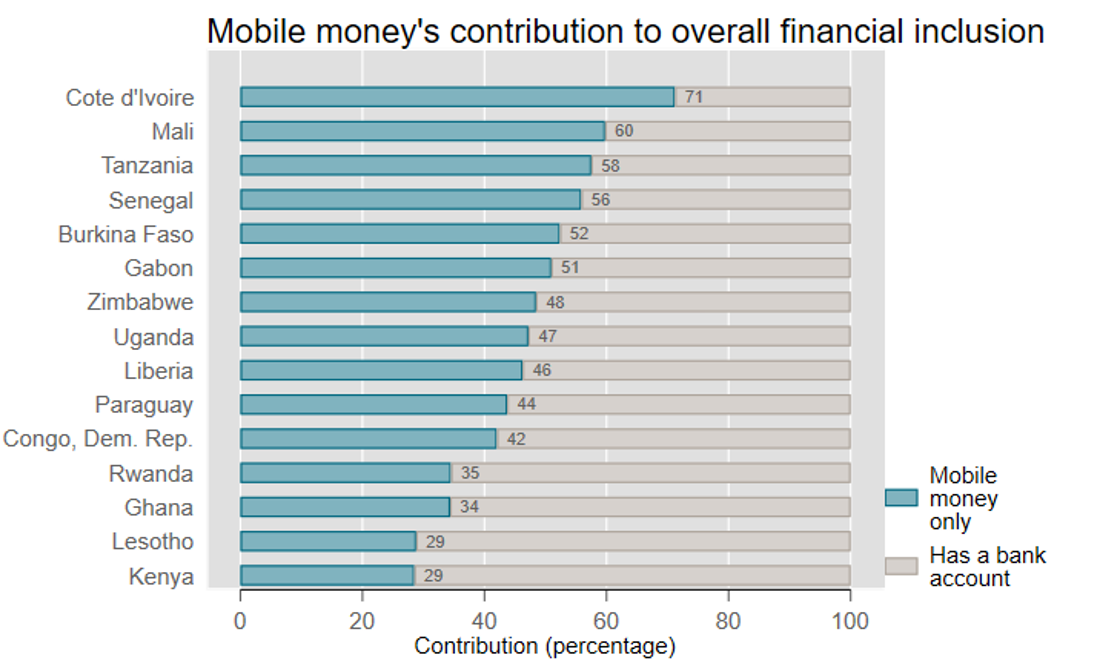 While this data provides a useful snapshot, the digital world moves extremely fast and it has already been two years since most of these surveys were carried out. The GSMA estimated global growth of 19.8 percent in registered mobile money accounts in 2018. While that growth was not evenly distributed, it shows that enormous short-term changes are feasible. Likewise, the categories used in this post are a bit artificial—many people have both a bank account and a mobile money account. For example, mobile money users in India are not highlighted by this analysis because everyone already has a bank account; yet a mobile money provider recently reported having around 350 million active users, which means that India is going to be a major mobile money market.

When mobile money grows, it has the potential to do so very quickly, especially among young people. With its convenience and relatively low barriers to entry, mobile money can provide financial access for many who don’t have traditional bank accounts, especially young people—as evidenced by successes in Africa. And together, mobile money and bank accounts are basic building blocks for a whole world of digital governance, and enable citizens to ask more of their state in terms of benefits and services.

Mobile money is still young, but its future looks bright.

Blog Post
India May Not Have As Much Digital Financial Inclusion As...
Nandini Harihareswara, Howard Miller and Anushree Deb

Publication
A Decision Tree for Digital Payment Services: The Case of...
Ivonne Acevedo and Miguel Székely