There are over 68.5 million forcibly displaced people in the world, including about 40 million Internally Displaced Persons (IDPs) who have moved because of conflict, which includes political, communal, and criminal violence. Millions more have been displaced by other drivers, including disasters, economic instability, and development projects such as infrastructure construction.

These IDPs, 99 percent of whom are in low- and middle-income countries (LMICs), face severe economic challenges. To support them in overcoming these challenges, policymakers should focus on helping IDPs achieve greater self-reliance. The best approach to doing so will depend in large part upon the context—particularly the extent to which IDP populations are based in urban or rural areas. Urban IDPs have access to greater economic opportunities, but they may need support to take advantage of them. To support rural IDPs, policymakers can invest in creating new economic opportunities in rural areas, while also helping some relocate to urban areas.

We find that about half of all IDPs (4.4 million out of the 9.3 million in our sample), are in urban areas and that nearly a quarter of them are in major urban areas with populations over 300,000. Furthermore, some countries have very large IDP populations while, in others, almost all IDPs are rural. This variation is not simply linked to differences in national rates of urbanization, since IDP urbanization rates do not necessarily follow national trends. In contexts where IDPs are disproportionately rural, there may be especially strong opportunities to facilitate their urbanization.

How Urban are IDPs and What Does that Mean for Their Economic Integration?

The analysis also highlights the lack of data on the locations of IDPs within countries: we found location data for only 23 percent of the roughly 40 million conflict-displaced IDPs.

This may entail moving away from the current "survival-focused" model, and moving towards a focus on greater self-reliance. For example, NGOs can help IDPs gain decent employment through interventions such as vocational training. Businesses can focus on hiring IDPs. Humanitarian actors can expand protection outside camps. Governments can lower policy barriers, such as requiring legal permission to reside and work in certain areas of countries (as in Iraq). Donors can invest in the broader development agenda by supporting effective urban planning.

The creation of new opportunities could involve leveraging the economies that grow out of IDP camps, which sometimes have tens of thousands of residents and may therefore present substantial market opportunities. Governments and donors can invest in developing infrastructure. Development banks can encourage private sector investment by offsetting risk. NGOs can help develop IDP and host businesses and employability. These changes could lead to sustainable growth in a way that benefits camp residents as well as surrounding host communities.

In addition, if there is a skills mismatch between rural IDPs and job opportunities, subsidizing or incentivizing some IDPs’ voluntary relocation to urban areas could be considered. Relocation schemes could involve monetary subsidies, and/or offering those relocated the same support being offered to other urban IDPs. Schemes could also target vulnerable hosts, thus creating broad-based benefits.

Crucially, following the Inter-Agency Standing Committee Framework on Durable Solutions, these kinds of relocation schemes should be entirely voluntary. The scheme should be collaborative, consultation-driven processes, which prioritize IDPs’ safety and wellbeing, and take their needs into account.

In countries where there is not enough data to understand the location and urban-rural composition of IDPs, making strategic decisions about how to allocate aid, design and focus programming, and create policies that most effectively support IDPs in achieving self-reliance, is difficult. Increasing investment in data collection will require greater political will from national governments, civil society, and international institutions. In part, progress can be made by creating frameworks for action and accountability at the global level. For example, frameworks like the Sustainable Development Goals (SDGs) have achieved broad international buy-in for certain goals, but IDPs have not been sufficiently elevated as key populations within these goals.

With greater funding, more resources can be allocated to organizations that are already conducting or supporting data collection, such as the Joint IDP Profiling Service, the Displacement Tracking Matrix, many national statistics offices, and other experts. Furthermore, greater focus can be placed on innovative technological approaches to generating estimates (which can be more cost-effective), such as those that rely on aerial imaging. Regardless of the technique, protecting IDPs and respecting their safety concerns should always be a top priority. And because of these concerns, it will not be feasible, or even desirable, to collect such data in all situations. Data collection should therefore be driven by the needs in a given situation, pursued as a collaborative process among relevant partners to ensure that it will be used effectively. 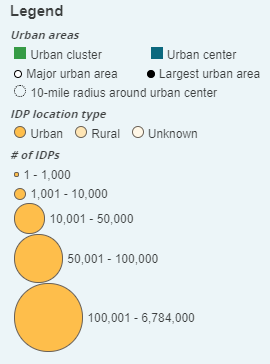