Every July 1, the World Bank releases updated income classifications for the new fiscal year, often resulting in headlines about various countries’ graduations to “middle income” status. A few months ago, Matt Juden posted some helpful Stata code to generate a dataset of countries’ graduations, and it’s worth revisiting now. But despite the global attention to these classifications and graduations, there is still widespread confusion about their meaning and significance. Let’s explore three myths that could be leading you astray.

Myth #1: Becoming a MIC means that a country is more creditworthy, less deserving of aid, or anything other than higher in GNI per capita

Last year, when Kenya graduated from a low income country (LIC) to a lower-middle income country (LMIC), an editorial in a Kenyan newspaper celebrated, stating, “the release of the new numbers gives Kenya a unique international standing in the eyes of investors and development partners … [and] raises Kenya’s profile as a credit worthy economy.” While it is true that graduation from low to middle income status is often framed positively, becoming an LMIC has nothing to do with a country’s creditworthiness. Income classifications are based entirely on where a country’s GNI per capita falls on a continuum of thresholds—nothing more.

Critics have offered suggestions for alternative classification systems that would offer a more nuanced picture. Economist Martin Ravallion proposes measuring a country’s capacity to address poverty through redistribution. Others stress the need to account for purchasing power parity in the measurement of GNI. Defenders of the status quo argue that incorporating more data into a classification system increases the likelihood that some are missing or not comparable. In their review of the alternatives, Bank statisticians Neil Fantom and Umar Serajuddin highlight the importance of universality and consistency in measurement, noting that GNI per capita correlates reasonably well with other development indicators. Nonetheless, the current income classification system should not be interpreted as anything other than what it is: a classification of income.

Myth #2: Becoming a MIC means that a country is graduating from IDA

Observers frequently conflate the World Bank’s analytical income classification system (the subject of this post) with the lending categories used by the Bank.

The analytical income classification system—which separates economies into low income, lower-middle income, upper-middle income, and high income—was created in 1989 for the sole purpose of helping Bank economists to analyze patterns and trends in the decade of data collected in the World Development Indicators. The Bank has remained faithful to these fundamentally wonkish origins and has never used the income classifications for operational purposes.

Operationally, borrower countries are distinguished by their lending category within the Bank: IDA-only, blend (both IDA and IBRD), and IBRD-only. IDA provides grants and concessional loans to the countries with the most difficulty borrowing externally. IBRD offers non-concessional loans to countries that they find creditworthy. Because IBRD terms are harder than IDA, IBRD borrowers tend to be perceived as more developed than IDA borrowers.

But graduating from LIC status is not the same as graduating from IDA. Eligibility for IDA benchmarks a country’s income against different thresholds and IDA graduation takes into account factors other than income. The figure below illustrates the relationship between the various income classification systems and gives a rough sense of how the operational income classification system maps onto a country’s lending category after accounting for other factors. 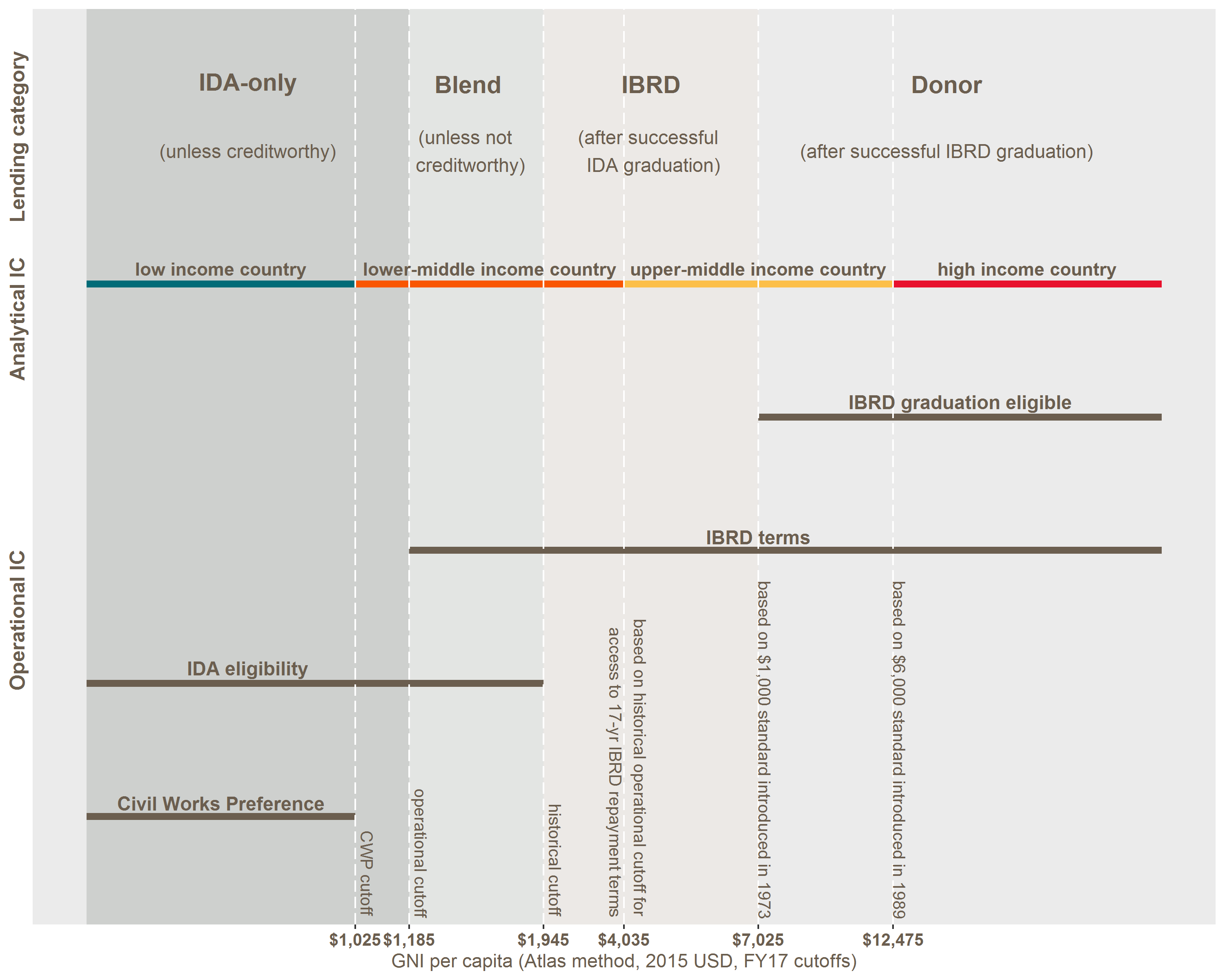 As depicted by the colored lines, an LIC becomes an LMIC when its income crosses what’s known as the “civil works preference” threshold, currently $1,025 (FY17). However, the IDA graduation process is not triggered until countries cross the “operational cutoff,” currently $1,185 (FY17). Even then, crossing the threshold is not sufficient to move a country into blend terms, let alone graduate to IBRD-only: the IBRD only lends to countries it finds creditworthy. While the IBRD’s creditworthiness assessments are more lenient than market assessments, several countries still fail to meet this standard. These “gap” countries may continue receiving loans from IDA, although they are expected to take steps to establish creditworthiness. Conversely, some countries—for example, China and India—became creditworthy and accessed IBRD loans well before they crossed the operational cutoff.

While the two are distinct systems, they both utilize the same underlying data—which is why countries graduating to LMIC status are carefully eyeing the approaching operational cutoff. But all should bear in mind the additional factors that influence a country’s lending category.

The World Bank Data Group, responsible for maintaining World Bank data and classifying countries, should be lauded for its efforts to improve the accuracy and transparency of income data. Without these efforts, the analysis below would not be possible. But the dish is only as good as the quality of the ingredients.

It’s hard to measure income, especially in the developing world where National Bureaus of Statistics may lack the capacity to measure economic activity or conduct population censuses. Sometimes an improvement in the quality of data reveals how bad old estimates were. One such improvement is when a country rebases its GDP, that is, when it re-calculates GDP using updated assumptions about the composition of the economy. The IMF encourages countries to rebase every five years, but in practice, some countries go decades between rebasing exercises. Consequently, rebasing can sometimes dramatically affect the estimate of a country’s GDP in an earlier year.

Rebasing exercises give us a glimpse into the sensitivity of income classifications for countries near the threshold because their effects can be so large that they would have affected a country’s classification. (The policy is that income revisions do not change a country’s income classification retroactively.) In the early 2010s, Nigeria, Ghana, and Kenya rebased their GDPs and discovered that their economies were much larger than previously thought. Because the World Bank makes available data from all versions of the WDI back to 1989, we can see the discrepancy between how these countries were classified and how they would have been classified if better data had been available at the time. The below figures plot in color income data over time as reported by all the available versions of the WDI; when the lines separate, it is because data has been revised. The effect of rebasing was so strong that the revised figures would have set Ghana above both the ceiling for LIC classification as well as the operational cutoff beginning in 2008, with Kenya crossing the LIC ceiling in 2011. Although rebasing had enormous effect in Nigeria, it was already above both cutoffs.

The point here is not to undermine the income classifications or the data on which they are based but rather to illustrate the uncertainty that hides in classifications. It’s not just that the thresholds are arbitrary (they are), but we are also often guessing the side on which some countries belong.

Although originally intended to help economists analyze data, the income classifications have taken on global significance. The World Bank may not use them for operational purposes, but others do (e.g., MCC, the Global Fund to Fight AIDS, Tuberculosis, and Malaria), and even within the World Bank they are an important precursor to graduation eligibility. Furthermore, the income classifications are now part of the vocabulary we use to discuss development and shape how we define progress. While it’s not out of the question that the income classification system could be revised, the existence of such a system will probably stick around for some time. Given its outsized impact, there is a need for outsized publicity reminding observers of what these classifications do and do not mean.

Blog Post
Is Good Monitoring and Evaluation the Secret to Success...
Biniam Bedasso