Earlier this month the U.S. House of Representatives passed H.R. 4481, Education for All, a bill that aims to strengthen USAID’s efforts in the realm of education. While the Senate has yet to take up the companion bill, S. 3256, here are a few thoughts on what American aid can and can’t do to improve learning around the world.

The best thing about H.R. 4481—and why I think it's worth supporting—is that it frames USAID's mission in education around a commitment to both access and quality, where quality is not just the airy-fairy concept referenced in the UN's Sustainable Development goals, but explicitly defined by outcomes (e.g. learning, literacy, numeracy, etc.) not inputs (e.g. buying more books). 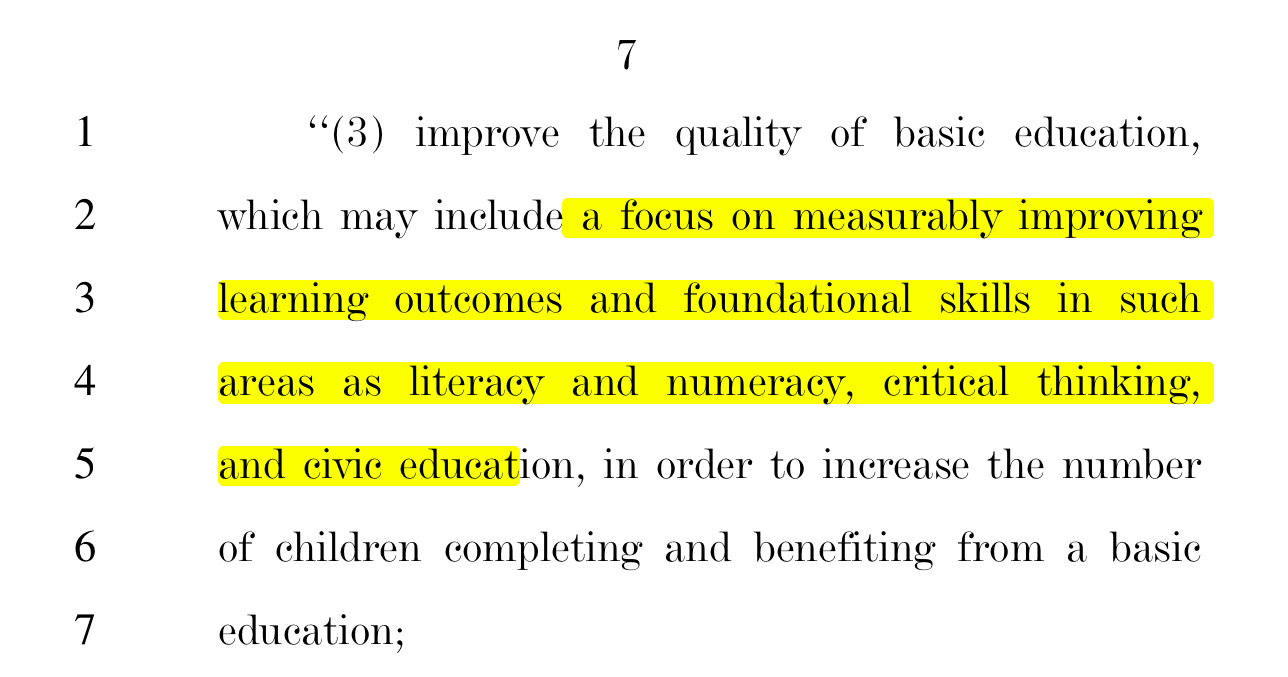 The narrow technical purpose of H.R. 4481 is to require USAID to write a major strategy document for its education work, create a new office to coordinate it, and periodically report back to Congress on what it's doing to implement the plan. So far so good.

But the subtext of the bill is that USAID should be doing much more on education. On that, I'm unmoved. All sectors want a bigger slice of the pie, and education's slice has been growing quite a bit (though you could argue it remains smallish). The portion of USAID disbursements going to education almost tripled from 2001 to 2015, rising from 2.4 percent to 6.7. While this isn’t an appropriations bill and doesn’t authorize any new money, it sneaks in an expansive agenda by reeling off a laundry list of topics and activities that USAID must cover, which could have the side effect of encouraging a lack of focus—and impact. 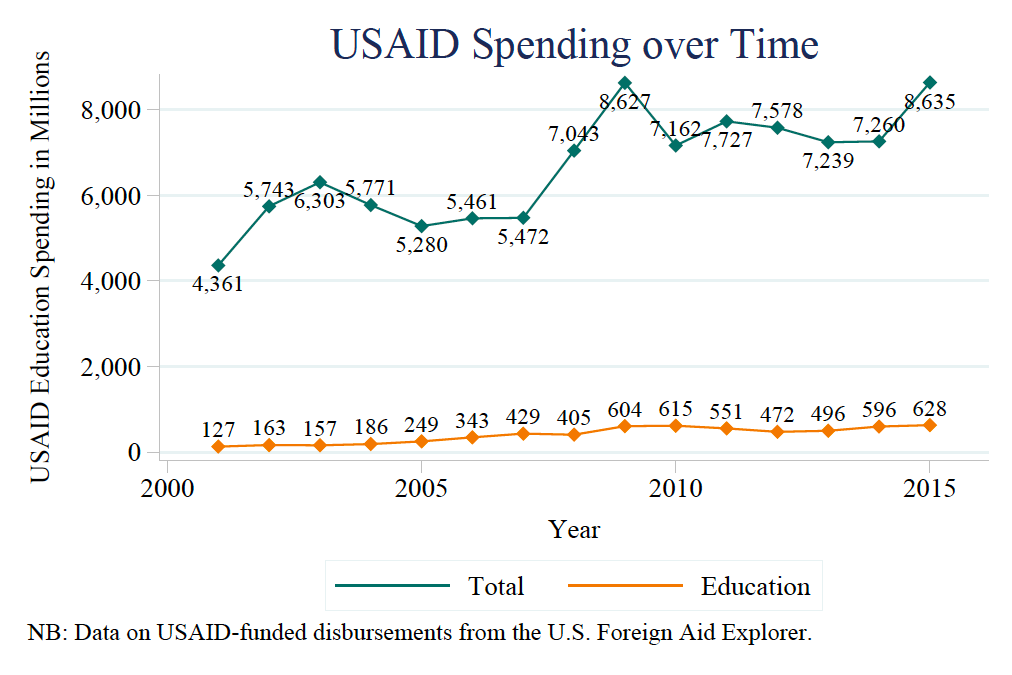 A framework to think about aid for education

The big conceptual framing that I think the bill is missing is to recognize that USAID is a tiny player in education finance, and that even poor countries are spending orders of magnitude more on education than USAID has to offer them. In a world where Kenya's education budget is bigger than USAID spending on education in all of Africa combined, it's worth asking what USAID’s education spending relevance is. The contribution of aid (or AID) to education can't just be finance that is a pure substitute for local spending.

The median country in terms of USAID education funding per capita is the Philippines, which receives 13 cents per person from USAID for education, and spends $55 per person from the national budget.

American foreign assistance in health, by contrast, is often quantitatively significant in budget conversations—especially in the area of HIV/AIDS through PEPFAR. But that's just not the case in education.

In judging this bill, it's worth asking: What kinds of activities maintain a coherent purpose in the era of tiny aid budgets relative to domestic social services? I want to make a case for three basic functions for the international community in general, with specific reference to USAID's strength and weaknesses.

So what should Congress ask USAID to focus on? Here are three suggestions.

While USAID's budget is minuscule relative to national education spending in general, there are kids who fall through the cracks. Refugees are a prime example of a vulnerable population that often lacks access to any public education system. But it's not just refugees. Failed states emerging from conflict without the capacity to fund or organize even basic services (think South Sudan or Liberia) are often much more reliant on aid and AID to keep schools open.

Both refugees and truly failed states could be conceived as wards of the international community, in an informal sense, when thinking about education funding.

The bill recognizes this unique problem. As it notes, "roughly half, or 28,500,000, of the world's out-of-school children live in countries affected by conflict and crisis." US foreign assistance is particularly needed and justified for this population, arguably more so than for poor people living in more or less stable states with functioning school systems.

However, the language of the bill seems to confuse palliative care with a cure. Aid can help children affected by conflict, but it’s not going to win wars or even prevent them.

The bill attempts to frame foreign aid for basic education in the developing world as a national security priority. It mentions the Taliban murder of 145 children and teachers at a school in Pakistan, and at least 68 separate attacks on schools in Syria. These examples confuse cause and effect. Both the Taliban insurgency in Afghanistan and the bloody and complex conflict in Syria clearly are national security priorities, and they both clearly do undermine basic education, creating a genuine need for aid. But this is aid is mitigating the effects of conflict, not addressing its causes. It's not clear that aid for education has anything to do with solving these conflicts, and it’s unhelpful to delude ourselves on this.

Since the big money in education in developing countries is domestic spending, the path to real impact is influencing how that money gets spent. Sadly, USAID has traditionally kept to itself, worked off budget and outside government systems, and implemented its projects through private contractors.

The bill has some welcome rhetoric about playing nice with government systems. And there's a big commitment to multilateralism. Both are useful steps toward making USAID a more constructive player in building effective national education systems, continuing trends already well underway in the agency.

However, the path to influence is still pretty vague. It seems unlikely that USAID is going to successfully implement the kinds of aid conditionality that the MDBs struggled to make work for decades. There is a lot of language in the bill about "leveraging" USAID money, but it's not clear what that means. All bilateral donors wants to leverage their money, but nobody wants to be leveraged.

I would be remiss as a CGD employee not to use this opportunity to put in a plug for some form of results-based aid modality, or cash-on-delivery aid as we call it around here. The bill is already strong on emphasizing measurable learning outcomes. If Congress really wants to push for progress on those outcomes, it should explore the possibility of putting money behind them. A modest pilot might be in order. And of course, if you want to pay against learning outcomes you have to measure them first, which brings me to the next topic.

3. Fund knowledge as a global public good (an area USAID excels in is health)

Aid is ideally suited to provide public goods that no individual developing country has sufficient incentive or resources to provide alone. Research on cost-effective innovations in education, new pedagogical techniques, and “edtech” (while overhyped) all fit in this category.

But Data and M&E are sort of a sideshow, designed to evaluate USAID programming. In contrast, I'd argue that USAID programming itself is the sideshow. M&E may be the main attraction. If USAID money provided the data and evidence base to do serious M&E for the education sector as a whole in many poor countries—and did nothing more than that—that'd be a huge contribution.

The task described here, for example, is huge (and worthwhile). 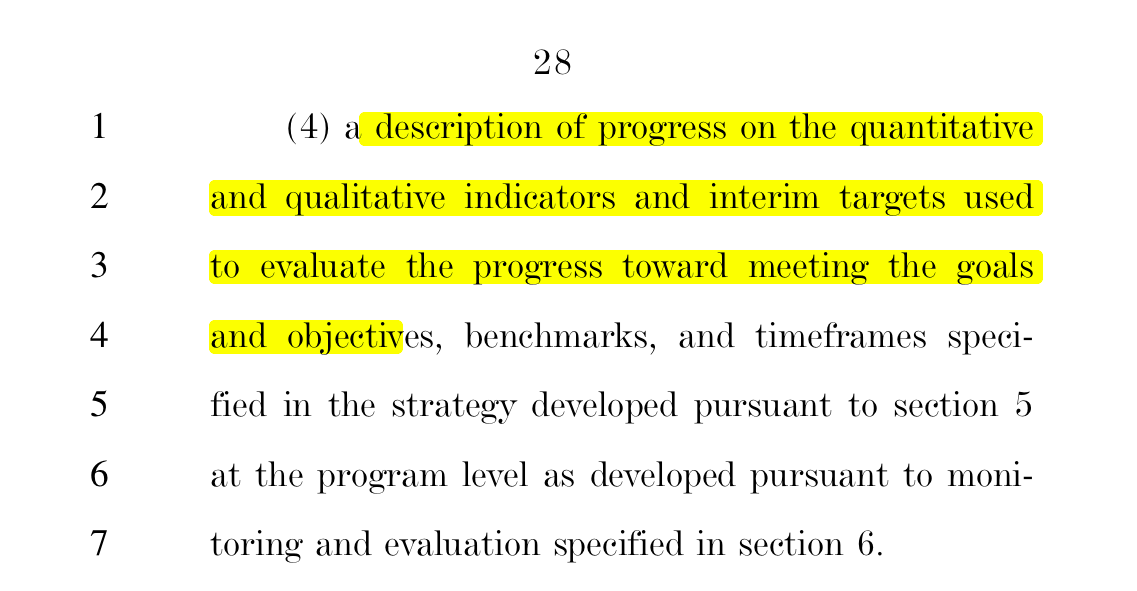 In the public health arena, USAID has contributed enormously to global knowledge through initiatives like the DHS surveys. Doing something similar for learning and education would be another major contribution. Knowledge has many dimensions, not just survey data collection, but funding, evaluating, and dissemination results from innovative pilot projects, as USAID has done through the Global Development Lab.

This bill may not be the place to dictate specifics, but it would be refreshing to see more emphasis on this work, and a recognition that—rather than paying for the nuts and bolts of an education system—providing this type of global public good may be a priority use for limited aid dollars in the sector.

Thanks to Beth Schwanke and Dev Patel for input.