Last week, Gavi, the Vaccine Alliance, completed a $7.5 billion replenishment to fund its work on immunization in the world’s poorest countries between now and 2020. Gavi’s next step is to ensure that the money is used as effectively as possible to save lives and improve health.

Today, we’re launching a working paper and policy brief  that we hope will be a helpful input to that discussion. We find that many of the vaccines provided by Gavi went to people who would have been vaccinated anyway, leading to little increase in overall vaccination rates — especially for the cheapest vaccines, and particularly in middle-income countries. Paradoxically, this is partially good news. Our results imply that if it's possible to save lives with a vaccine that costs a few cents, most middle-income countries will do it with or without aid. But that doesn't mean there's no place for aid. First, the poorest countries in the world still struggle to roll out basic vaccines.  Second, for newer vaccines that countries have not widely adopted on their own, we find signs of a positive impact of Gavi aid on vaccination rates.

A natural experiment at a global level

Measuring the impact of Gavi is difficult. Alas, Gavi did not conduct a global RCT, randomly selecting program countries to receive aid. But they did something almost as useful from an analyst’s point of view: Gavi focused on countries whose initial gross national income (GNI) was below a strict threshold, originally set at $1,000 per capita. That means Gavi countries were poorer and had lower initial vaccination levels than non-Gavi countries. But the strict cut-off allows us to compare countries on either side of the threshold that should be fairly similar, and check for a jump in outcomes at $1,000.

As shown in the graph below, Gavi’s abrupt eligibility cut-off was fairly well enforced: the probability a given country received aid from Gavi in a given year jumped from about 20 percent if they had a per capita GNI just above $1,000 to over 80 percent if they were below the line. Lower-middle-income countries (i.e., countries in the vicinity of the cut-off, which is where our analysis is relevant) received roughly one-quarter of Gavi’s programmatic funding, while low-income countries, those further away from the threshold, received the remaining three-quarters. 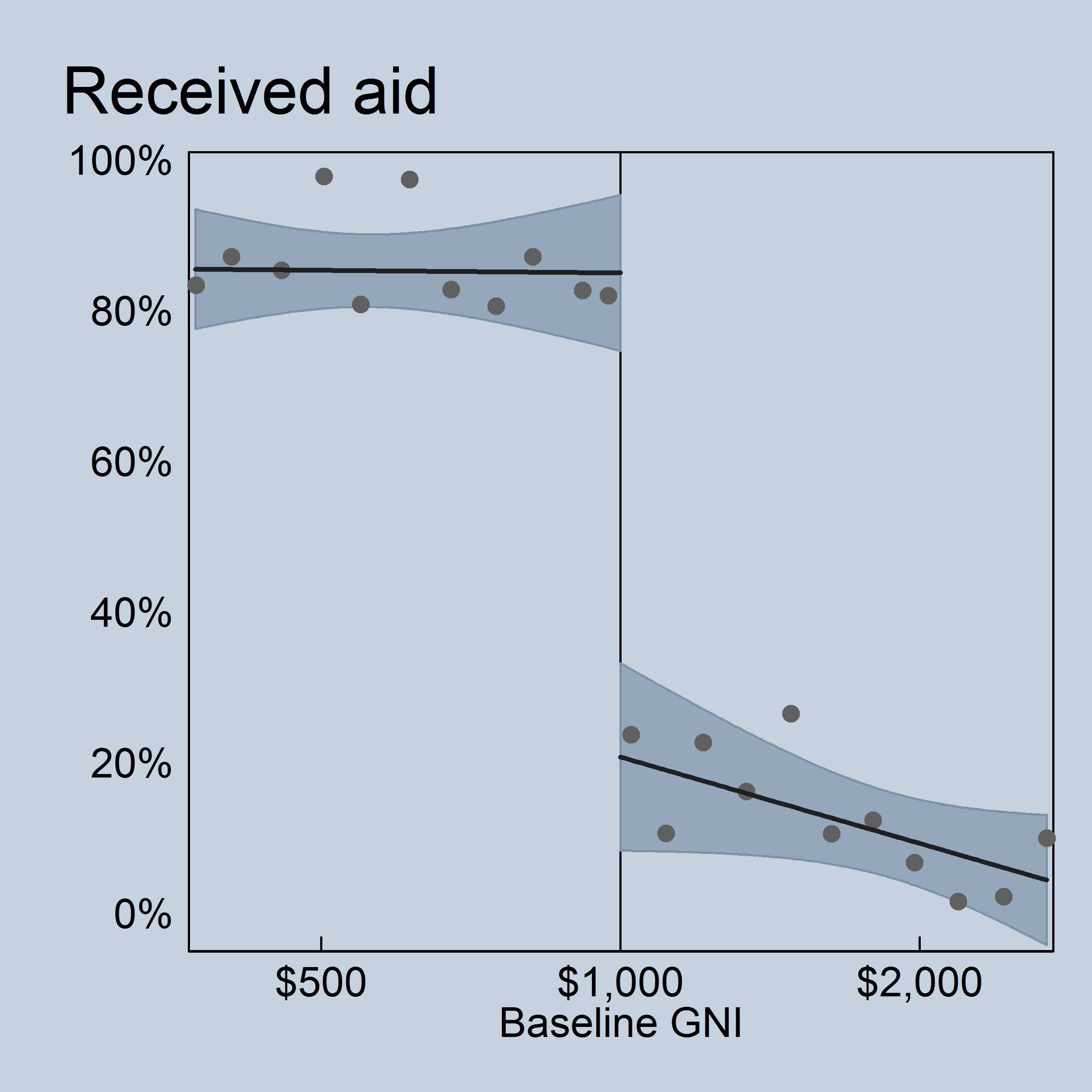 So aid levels clearly jumped at the arbitrary $1,000 income threshold. Did outcomes jump as well, signaling a positive impact of Gavi aid? In short: for cheap vaccines they didn’t; for more expensive vaccines, results are more promising.

The results suggest that the impact of Gavi support depends on the vaccines it is buying. Approximately 40 percent of Gavi’s programmatic funding has been used to buy pentavalent vaccines — a combination shot covering diphtheria, pertussis, and tetanus (DPT) alongside Haemophilus influenza type B (Hib) and hepatitis B (hep B). In 2000, DPT coverage in threshold countries was already high, and the cost of the vaccine was low. Hib and hep B were more expensive, but prices for hep B fell fast and many non-eligible countries adopted the vaccine as part of their schedule. Today, DPT is available for $0.17 a dose, and hepatitis B for $0.19 a dose. Gavi’s provision of pentavalent vaccines effectively crowded out domestic spending on DPT and hep B.

But many countries above the threshold for Gavi support did not roll out Hib vaccinations, suggesting that element of the Gavi-purchased pentavalent vaccine was providing additional immunizations that would not have happened absent Gavi support.  Similarly, Gavi purchases of the rotavirus vaccine (at $5 a dose), increased coverage among eligible countries as compared to ineligible countries.

The graph below shows hep B vaccination rates for countries on either side of the Gavi eligibility cut-off. While aid deliveries jump sharply at the eligibility line, there’s no sign of a similar jump in vaccinations — suggesting limited or no impact for countries near the threshold. 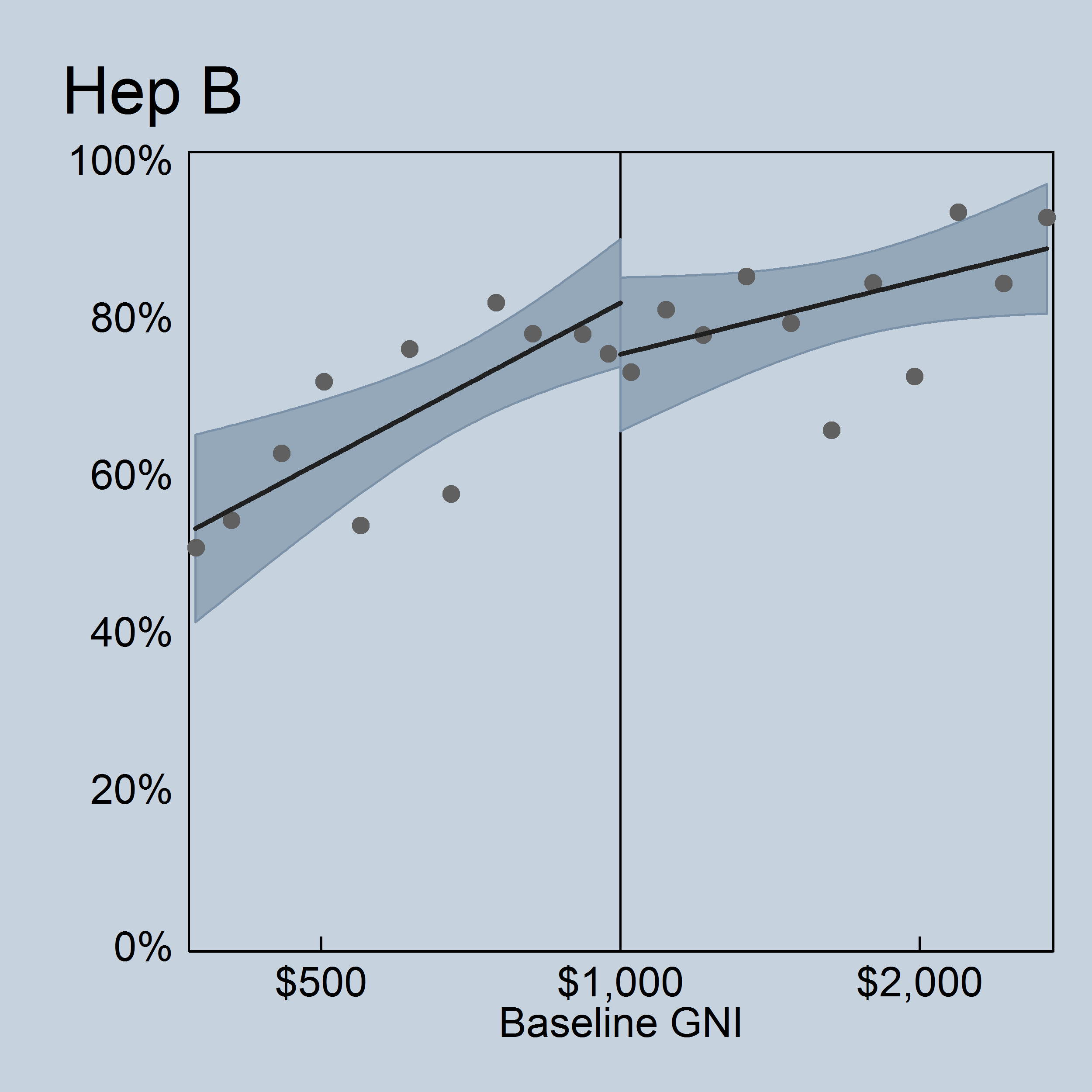 The picture looks more compelling for Hib. Though still far from conclusive, there’s a statistically significant jump up in Hib coverage as you cross the threshold into Gavi eligibility. 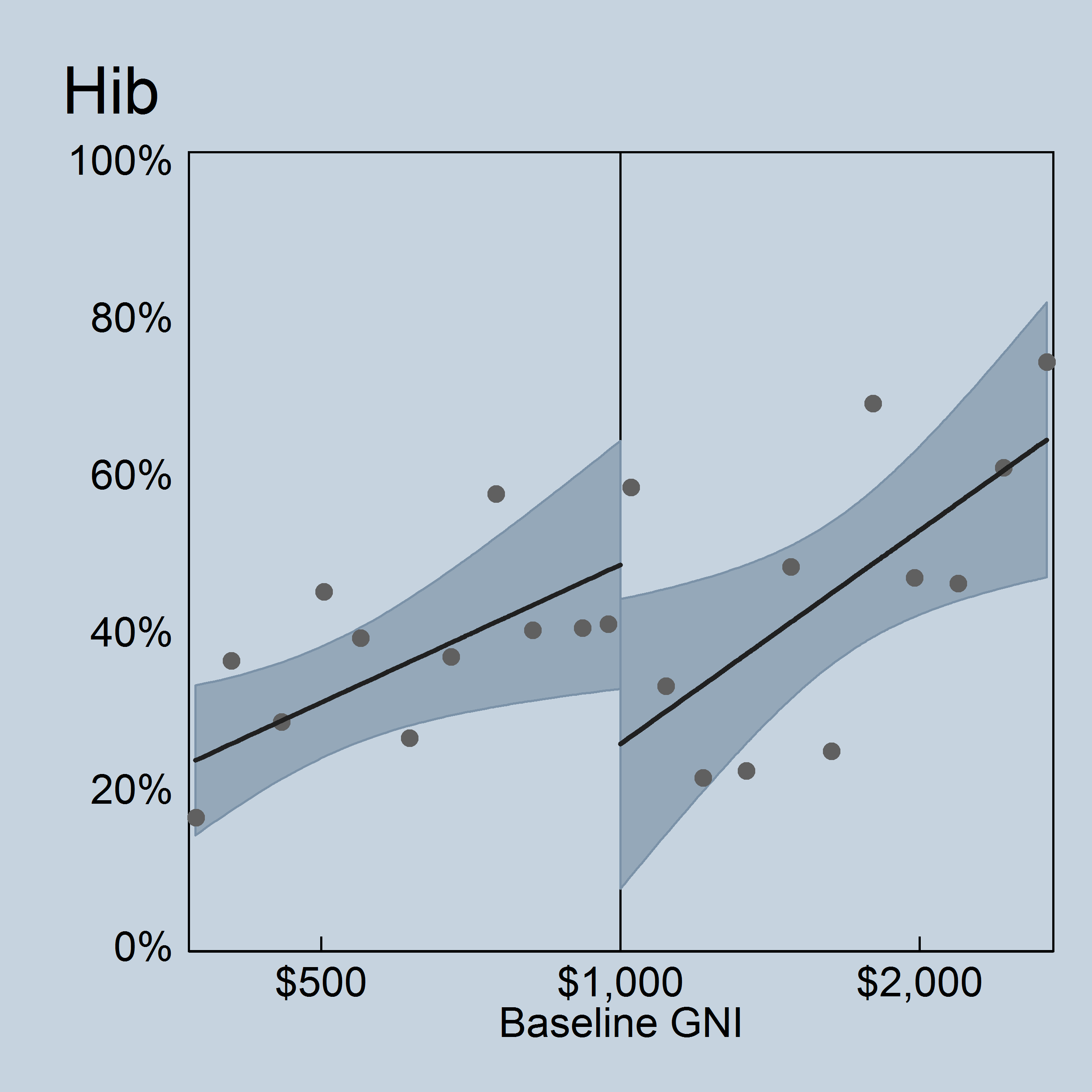 The results suggest that Gavi’s model of providing aid “in kind” (vaccines rather than cash) does not make it immune from the phenomenon of fungibility, where aid crowds out a recipient’s own spending. In this case, Gavi support for cheap vaccines in threshold countries displaced vaccine spending that governments would likely have made regardless. And the governments used the savings elsewhere. For vaccines that would not have been purchased absent Gavi support, fungibility was much less of an issue since there was no existing spending to displace.

It is important to note that these findings apply to countries near the threshold of Gavi eligibility. Across Gavi-eligible countries as a whole, hepatitis B coverage increased from 17 percent in 2000 to 80 percent in 2013 while Haemophilus influenza coverage increased from 4 percent to 77 percent. This very rapid adoption is consistent with a story that Gavi facilitated rollout of coverage through the provision of a combination vaccine covering those diseases as well as diphtheria, pertussis, and tetanus, especially in the poorest countries.

Vaccines save lives, and we find some evidence Gavi has significantly increased vaccine rollout. But our research suggests Gavi might have had an even bigger impact if it had steered resources away from buying cheap vaccines and associated expenditure in threshold countries. The good news is that Gavi has already started making reforms in this direction, introducing phased cofinancing at the threshold. We hope our paper will help in the design of the next round of adjustments.

Blog Post
Make Me a Match: We Want Your Ideas to Kick-Start...
Rachel Silverman and Cordelia Kenney