The effects of the conflict in Ukraine are reverberating across the world. In Northeast Africa, its ripples endanger the peaceful governance of food and water. Diminished wheat imports from Russia and Ukraine will make Egypt still more conscious of the threat posed to its agriculture by Ethiopia’s Grand Renaissance Dam. The coming months will be crucial, and diplomats and multilateral actors must be prepared to exert pressure to ensure a stable outcome.

Increasing attention is being paid to the impact of the war in Ukraine upon global access to food. For good reason: between them, Ukraine and Russia supply 29 percent of the world’s wheat exports, accounting for 12 percent of the world’s total traded calories. Belarus and Russia, both under heavy sanctions, also provide a large percentage of the world’s fertiliser. Oil prices give further cause for concern. The cost of producing and moving food will increase, and the cost of producing fertiliser will rise. All this follows close on the heels of post-COVID inflation.

Global wheat prices make for chilling reading. Between February 1st and March 18th wheat prices rose markedly: at one point, prices had risen by 67 per cent, before falling since March 10th to hover around a 40 per cent increase. Wheat futures rose by 50 percent between January 1st and March 14th, fuelled by speculation of shortages. With prices likely to remain high, it is unsurprising but alarming that some countries have already implemented full or partial grain export bans, which will drive global prices up further.

The situation in Egypt presents particular cause for alarm. It imports around 62 percent of its wheat, of which about 80 percent comes from Ukraine and Russia. Wheat prices cause a greater headache for Egypt’s government than for most: since 1941, the state has provided subsidised bread for vulnerable members of Egyptian society. This subsidy now consumes 2 percent of the government’s budget and provides bread for around two thirds of the population. Successive governments have considered this subsidy with rising nervousness. The bread is sold at $0.03, but now costs well over twenty times that to produce. In August 2021 President El Sisi declared that “it’s incredible that twenty loaves of bread are bought for the price of a single cigarette. This must stop.” The desire to reduce the policy’s cost, however, must contend with Egypt’s political reality. The bread subsidy has become part of the social contract between state and citizen; for many citizens, it is a vital lifeline. Previous efforts to amend it have led to protests and riots. Some analysts have argued that rising bread prices in 2009 contributed to the Arab Spring.

Many countries have responded to the impending global food crisis by increasing cereal cultivation, albeit hindered by increased input costs. Ireland has requested its farmers plant wheat; Saudi Arabia has increased the state buying price of grain to incentivise production; Canadian farmers are increasing wheat planting. Egypt, similarly, has committed to sowing an extra 2 million acres of wheat over the next two years. This will not provide anything close to self-sufficiency—which would require 6 million acres, or more than half of Egypt’s total agricultural land—but it will provide a valuable reduction in dependency on imports. Domestic production will provide around four months of consumption; with its strategic reserves, Egypt has wheat for nine months, after which it will need to compete with the world for alternative sources.

Egypt’s increased agricultural impetus depends on water. Egypt receives an average of just 10mm of rain per year, which makes it highly dependent on water from the Nile River. 97 percent of Egypt’s water supply comes from the Nile.

Upstream, a massive development project risks disrupting this supply. The Grand Ethiopian Renaissance Dam (GERD), constructed on the Nile, can hold up to 74 cubic kilometers of water–the equivalent of over one and a half years of the Nile’s flow. It began partial hydropower operations in February of this year. The dam holds a crucial role in Ethiopia’s development plan, and in its self-perception. It is expected to ultimately cost more than $5 billion—7 percent of Ethiopia’s GDP in 2016—and, with the exception of a $1 billion loan from China, it has been financed entirely by Ethiopians after Western lenders opted not to get involved. Ethiopia is now in its second year of a devastating civil war. The dam serves as a symbol of Ethiopian unity. Nearly 60 percent of Ethiopia’s population does not have access to electricity; the dam will provide them, and the wider region, with a renewable source. Some estimates have suggested that electricity exports could eventually earn Ethiopia up to $1 billion per year.

Ethiopia has conducted two fillings of the dam so far, and expects to hold its third in summer 2022. Each filling has been undertaken unilaterally. Ethiopia was not a party to the colonial-era treaties governing use of the Nile’s water, and multi-year efforts to mediate an agreement have not yielded any result. Ethiopia’s prime minister, Abiy Ahmed, insists that once filled, the GERD will allow water to continue flowing without affecting the downstream countries. During the filling process, however, the amount of water downstream will inevitably be affected, especially if the dam is filled more quickly: currently, eager to reap the dam’s benefits, the GERD is expected to be filled in four to seven years. Studies suggest that Egypt’s food production from irrigated agriculture could be reduced by between 19 and 28 percent during filling. Another study suggests that a reduction in the Nile’s flow may see it fall beneath the Mediterranean, increasing salination. 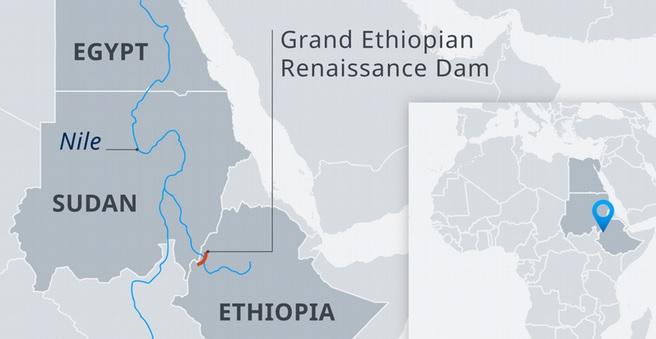 This summer’s filling of the dam will come at an extremely fraught time. For Egypt, the dam has long been described as an existential threat. At a 2020 UN Security Council meeting, Egypt’s Foreign Minister warned that conflict could be expected unless a multilateral agreement is reached, and in 2021, Egyptian President al-Sisi had to urge Egyptians calling for war to stop talking “nonsense.” With food prices rising, however, and Egypt’s dependence on the Nile’s water greater than ever, calls for action are likely to increase.

It is crucial that any action taken is constructive. In theory, the GERD could be of immense benefit to all countries in the region. Its power generation has the potential to be developmentally transformative. The store of water could smooth the Nile’s flow, reducing the likelihood of destructive floods downstream, and releasing held water during droughts— of particular relevance to Sudan. The dam could usefully foster interdependence between Sudan, Egypt, and Ethiopia. It could also, however, be used as a geopolitical tool: political scientists are already discussing Ethiopia’s potential role as a “water hegemon.”

If Northeast Africa is to remain stable, there is no alternative but for Ethiopia to pledge to use the GERD in a way that respects the needs of the other countries on the Nile. This will require willingness to fill the dam more slowly to reduce the possibility of a water shortage, especially during the approaching period of heightened food insecurity. It will also require a formal commitment from Ethiopia pledging to release an adequate amount of water each year.

Numerous rounds of talks, with multiple mediators, have not yet produced any results. Most accounts have blamed Ethiopian unwillingness to compromise. International actors must re-engage in all ways possible to incentivise an equitable, and peaceful, outcome. Further instability in the Horn benefits no one. Wider international funding could also be used to assist Egypt’s transition towards more efficient agricultural practices and water usage, to reduce the risks posed by filling periods and by future droughts.

The GERD holds enormous potential. Ethiopia, and the wider region, has great need of it. But if it is to fulfil its promise without triggering conflict, compromise will be necessary—this summer, more urgently than ever. Efforts from the international community to assist this process could help head off a crisis and reap benefits for decades.