Following wide criticism of the way the government had been formulating and communicating its COVID-19 response, particularly on its scientific rationale, the UK government has initiated daily public briefings on the evolving crisis. Last week we urged the government to improve its public communications during this outbreak—including through sharing the evidence underpinning its decisions—and the move to daily briefings and sharing relevant analyses is a welcomed step. Earlier this week the government escalated its response to COVID-19, and at the same time, researchers at Imperial College released the epidemiological modelling which seems to have been driving, presumably with additional evidence, the government’s response—both its earlier focus on mitigation and, following critical model updates, the new more aggressive focus on suppression. (Colleagues at the Center for Global Development and around the world are reviewing the various modelling analyses that governments are employing.) Below we run through the UK government’s communications so far, and outline recommendations for the government to improve its communication ever further, by revamping its whole evidence-informed decision-making approach. In doing so, we ask questions about the way modelling and other evidence can more effectively inform the government’s response.

At the government’s first daily briefing, held on 16th March, the chief medical officer (CMO), the chief scientific officer (CSO), and the prime minister announced tougher measures to deal with COVID-19. (The second briefing focused more on the economy.) They ramped up the country’s response significantly by calling on everyone to avoid nonessential and unnecessary travel, to work from home where possible, and to avoid socialising in pubs and theatres. In addition, the CMO and CSO noted the scientific considerations that informed the decision process remained focused on “flattening the curve” and reducing avoidable deaths.

Helpfully in our view, and for the first time since the outbreak, the CSO, Professor Chris Whitty, outlined the potential health impacts of COVID-19 that are less related to the virus itself and more to the way we respond to it. He highlighted three distinct types of health impact: “direct deaths” caused by COVID-19; “indirect mortality” as a result of individuals receiving suboptimal care because of the increased burden on health services caused by the epidemic (as we have seen in places like Italy and China); and “wider effects,” which he did not specify, but presumably include the health impacts of a prolonged recession, including pension liabilities, social care, and housing crises, amongst others.

Monday’s statement was perhaps the first signal the government is considering (as it should) the net health impact of a coordinated government—and indeed global—response to COVID-19 (see figure below). Since then the chancellor has announced the biggest-ever package of economic support in the country’s history at 15 percent of the UK’s GDP. At the same time, calls are growing to explicitly consider the potentially detrimental and most likely long-lasting effects of response measures on health and wellbeing in the UK and beyond.

How should the government “do” evidence-informed policy-making better? Three broad recommendations

The modelling analysis published by the Imperial College COVID-19 Response Team on the same day as the first briefing, seems to have contributed to the escalation of the response measures. But inevitably, uncertainties remain, fuelling calls for further transparency. Going forward we recommend that the government set out clear rules as to how the models and other evidence informing its decisions ought to be shaped, quality assured, and well communicated, starting with the following three steps:

Figure 1. Outline of net health impacts that should be included in modelling 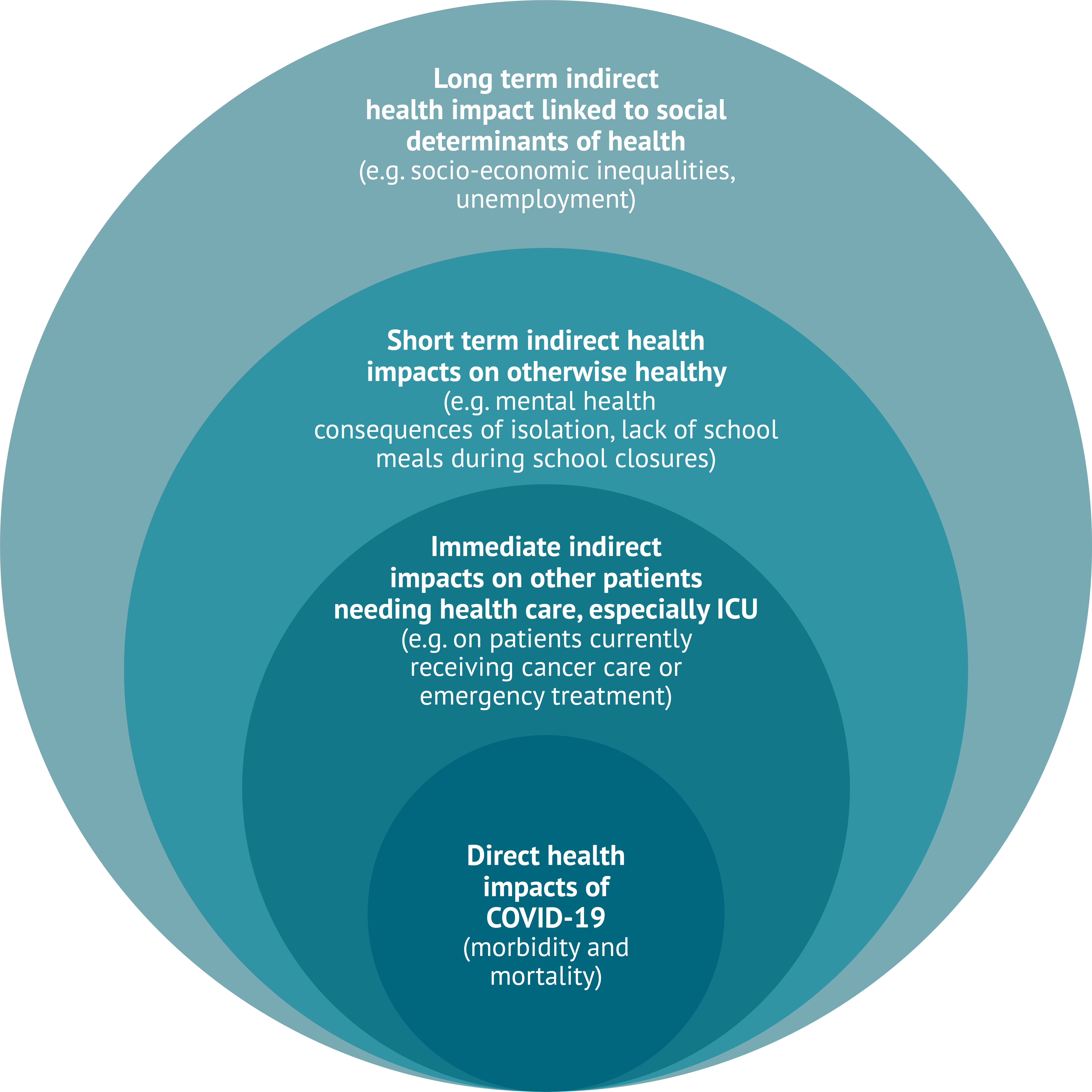 In the section above, we highlighted in broad terms how the government and its partners can improve the process of incorporating science and evidence into policymaking. Below, we focus on a number of specific areas we argue would enhance the evidence base (including modelling) and support better decisions.

As we anticipate SAGE’s publication of the models and data underpinning its advice to government, we outline five issues that need addressing. We understand that these issues may already have been addressed, but this cannot be ascertained given the data released so far (and their format):

The government needs to do more than simply argue that decisions are being informed by the scientific evidence (which is in itself welcome and a lot more than many other national authorities and multilaterals are currently doing). The science should be put out into the public domain and subjected to constructive interrogation in the context of a structured process. (This is already happening, though perhaps in an unstructured and less helpful fashion through social media—e.g., see here and here.) The evidence and its assessment and interpretation must be multidisciplinary: for instance, the criticism of the government’s approach to “behavioural science” has been misplaced. In order to have and to trust in evidence-based policymaking, we need different perspectives that are all subject to detailed scrutiny.

Now is the time for a process that encourages multidisciplinary perspectives, including the impact on resource use and costs, and includes an honest interrogation of all relevant evidence and the inevitable uncertainty surrounding it. This is clearly a fast-moving situation, but that does not negate the need for carefully designed decision-making processes. Fortunately, the UK has substantial experience in this space, particularly with respect to evidence-informed decision making for translating evidence into policy and building social legitimacy for difficult choices and a tradition in studying how best to communicate science (and scientific uncertainty). If the outbreak lasts for 18 months or so, this is the time to set up flexible decision-making processes that engage evidence and people in a timely fashion. If anything, the trade-offs ahead will only get tougher—transparency, broad engagement, and trust will be crucial to ensure an effective response.

Blog Post
Will the UK Chancellor’s Accounting Be “The Tail that...
Ian Mitchell

Blog Post
Survival of the Fittest or Missing at Random? How FCDO’s...
Euan Ritchie and Ranil Dissanayake