I don’t claim to know about financing movies, but I have some sympathy for the bemusement Treasury Secretary Mnuchin has displayed over the state of US financing for the multilateral development banks (MDBs). At a recent budget hearing, committee chairman Hal Rogers drew Mnuchin’s attention to the fact that the “past due” notices from the World Bank and regional MDBs are now approaching a record $2 billion. Mnuchin acknowledged a problem, expressed some degree of mystification about federal budget accounting, and pledged to get things in order.

So what’s all of this about?

It’s true that the US government has gotten way behind in meeting its commitments to these institutions, and worse, is the only country in the world that routinely fails to make good on its MDB pledges. 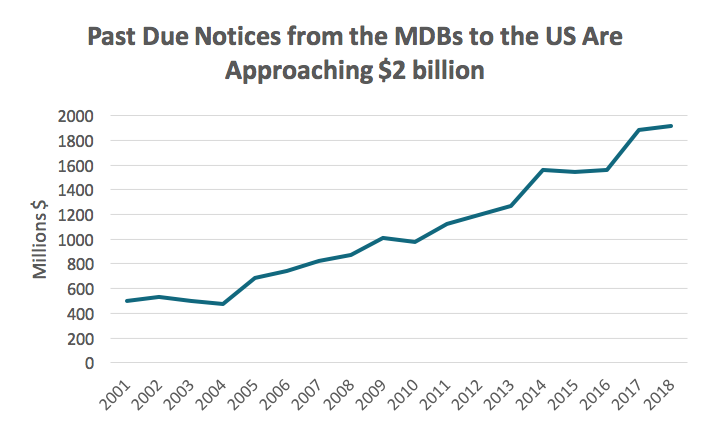 This problem does not exist when it comes to US capital contributions to the MDBs – that is, financial contributions that are tied directly to the purchase of equity shares with direct implications for voting power. When the United States pledges capital to the MDBs, it pays on time and in full with very few exceptions, out of fear of losing voting power. In contrast, the “arrears” problem afflicts the annual US grant contributions to the MDBs’ subsidized lending arms, largest of which is the World Bank’s International Development Association (IDA).

So how did we get into such a fix? It’s because, unlike most other countries, the United States does not make pledges from a known pot of money. US Treasury officials make a pledge and then go to Congress the next year with hat in hand, asking that the pledged funds be appropriated. In most other countries, pledges are drawn from a pool of funds already appropriated by their parliaments. Given the very different sequencing, it’s not surprising that the track record for other countries in meeting their pledges is something like 99.9 percent, while for the United States a good outcome is something like 80-90 percent.

The MDBs themselves are complicit in the problem. The US pledge, typically one of the largest, has an inflationary effect on other donors, who tie their pledges automatically to the overall fundraising effort. For example, Belgium might pledge to meet one percent of the overall replenishment. So, the more the US pledges, the more Belgium automatically pays, no matter whether the United States ever fully delivers on its pledge. As a result, the MDBs themselves are aiming for the highest US pledge possible. You might think the other donor countries would be less enthused, but for the most part, they’ve been largely indifferent in recent years. This is likely because their politicians and parliamentarians are not entirely aware of the problem.

Mnuchin’s responses to Rogers were interesting. He was careful not to commit to make good on the past pledges. He simply pledged to fix the accounting. Given the cuts contained in the FY2018 budget, it may finally be time for the United States and the MDBs to end the dysfunctional relationship and simply acknowledge that much of these arrears will never be paid. That may be easier said than done, since any explicit agreement could very well provoke the negative reaction from other donors that has been seemingly dormant.

Whether he can produce a viable plan or not, Secretary Mnuchin’s instincts are right that there is some gimmickry in play here that is problematic. When the dollar amounts are small relative to the pledges themselves, it may not matter much. But with arrears that now equal the entire annual US contributions to the MDBs, it is too big of an issue to politely ignore.