It is time that donors and technical assistance providers turn their attention to tax concessions provided by developing countries struggling to raise more taxes from domestic sources. The granting of tax concessions is not only mostly opaque and prone to corruption, but these concessions are further constricting the already narrow tax base of countries, thereby undermining the Addis Ababa Action Agenda to promote domestic resource mobilization. There is a risk that additional revenues collected through tax reforms may be lost through tax concessions.

The hidden costs of tax concessions

It is common for tax systems in both advanced and developing countries to grant tax concessions to certain consumers and producers. The budgetary cost of these concessions is referred to as “tax expenditures.” They are a kind of expenditure because governments forgo revenues by granting concessions that are not part of the regular tax system.

These concessions take several forms. Income generated in a region or sector may not be taxed at all or taxed at a reduced rate. Taxpayers may get targeted allowances to lower their tax liability, or defer payment of taxes, and/or receive exemptions from payment of import duties or taxes on domestic production.

In some advanced countries, it is a legal requirement to estimate tax expenditures annually. In other countries (including a few emerging markets), such estimates are produced only periodically. In recent years, there has been a growing interest among finance ministers of developing countries to ascertain the magnitude of tax expenditures in their countries. The reason is understandable: they are under pressure to mobilize more taxes from domestic sources, but they are unaware of the cost of tax expenditures since multiple ministries and agencies grant concessions. For example, tax incentives for promoting investment—which are part of the broader concept of tax expenditures—are granted by various ministries, such as petroleum, investment, industry, and tourism, and there is no central authority that keeps track of them.

I argue that more light should be shined on tax expenditures in developing countries through their regular estimation and publication. This would make a large “spending” component more transparent for taxpayers and the international community and facilitate an informed debate on the costs and benefits of tax expenditures. From the perspective of public policy, tax expenditures should be as cost effective as any spending program in the budget.

A snapshot of tax expenditures

Figures 1 and 2 present tax expenditures as a percent of GDP and total tax revenues, respectively, for 34 countries as compiled from various sources. Although these estimates are not directly comparable because countries use different methodologies to calculate tax expenditure, they nevertheless confirm that many governments, both in advanced and developing economies, are giving away large sums of money through tax concessions. In one-third of the sample countries, tax expenditures are 5 percent of GDP or more. And there are four countries—Ghana, Costa Rica, Dominican Republic, and Guatemala—where they top 40 percent of collected revenues! 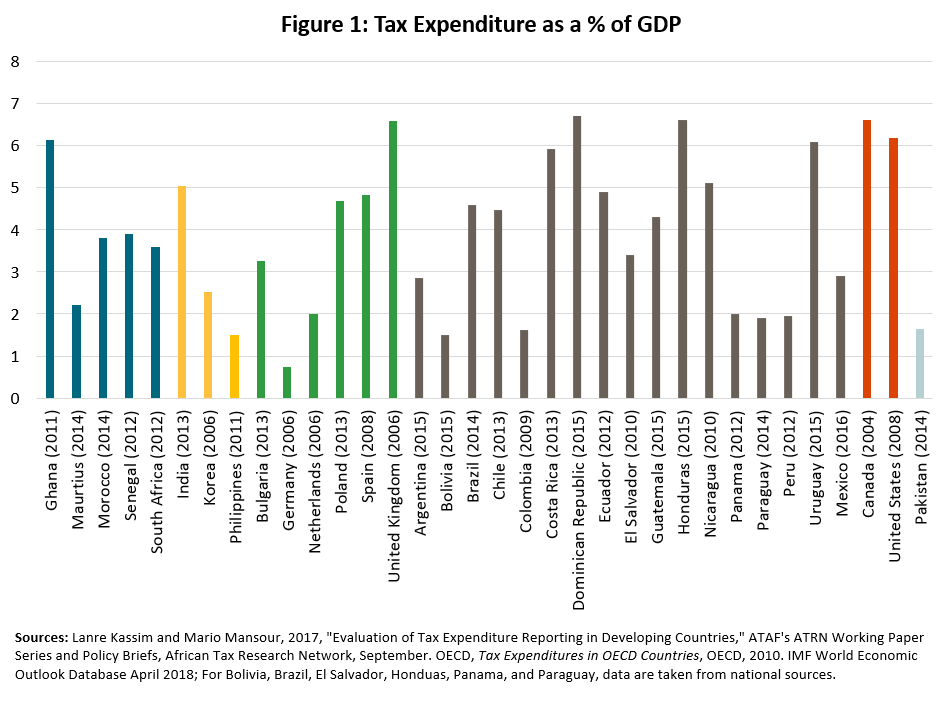 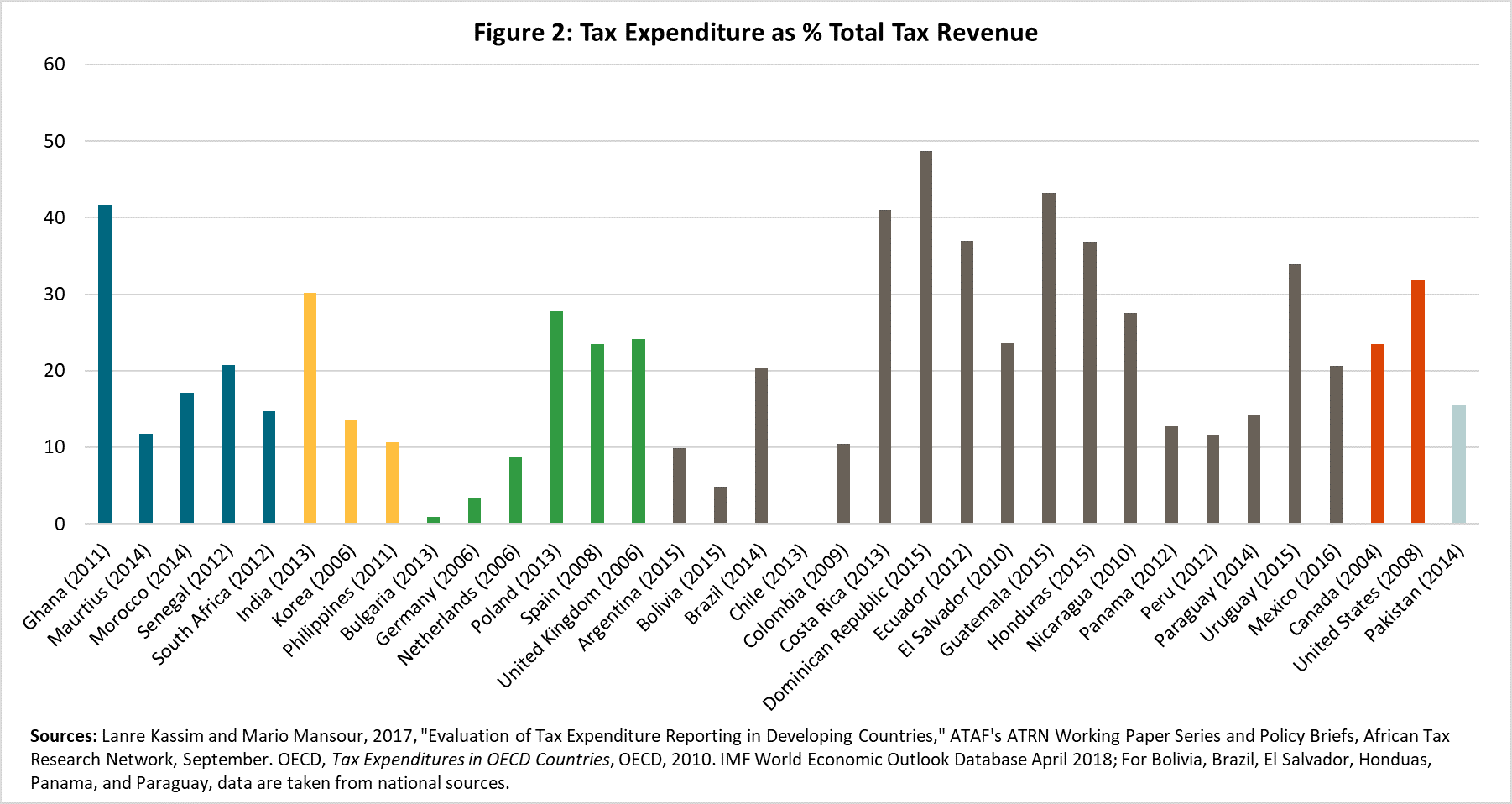 In general, tax expenditures harm the efficiency and effectiveness of a tax system. But not all tax concessions are detrimental to the economy. For example, tax credits for research and development—when properly administered—can generate positive gains for the economy.

As a starting point, developing countries should publish their tax expenditures

Despite their shortcomings, tax expenditures are unlikely to be eliminated any time soon and will remain part of the tax systems of both advanced and developing countries. That said, it is important that all developing countries estimate and publish tax expenditures regularly to facilitate an assessment of their costs and benefits. This will enhance the transparency of government operations with beneficial consequences for general governance in a country.

Even if countries wished to calculate and report their tax expenditures, many lack the capacity to do so. International organizations such as the IMF and World Bank and donors who have committed to scale up their capacity-building efforts under the Addis Ababa Action Agenda should step in and offer support. A country’s technical assistance program supported by them should not only include an appraisal of tax expenditures but also strengthening of local capacity to prepare such estimates. To give greater credibility to the exercise, international organizations should propose a robust framework for estimating tax expenditures to prevent governments from underreporting them, while recognizing that going forward, tax concessions in personal and consumption taxes (such as the value-added tax) are likely to assume greater importance.

There are several steps that developing country governments will need to implement to make their tax expenditures more transparent and cost effective:

Undoubtedly, this is a tall order. But if developing countries are serious about collecting more taxes from domestic sources to fund social programs and infrastructure, action on tax expenditures will have to be a key component of this strategy.

Event
The Peril and Promise of Financial Markets For Developing...
Shantayanan Devarajan