Three Lessons from a New Phone Survey in Pakistan

After six months of school closures, Pakistan began reopening its schools in a phased manner on September 15, 2020. Schools had been shut since March 13, 2020 in response to the COVID-19 pandemic. The country had also imposed a lockdown in most provinces on March 24. While that lockdown has long been lifted and schools started opening two weeks ago, it is expected that the educational, economic, and health impacts will linger.

To understand these impacts, CGD partnered with the Citizens Foundation (TCF) in Pakistan and with the Center for Economic Research in Pakistan (CERP) to survey households with students in TCF schools on how COVID-19 has affected their children’s education, their livelihoods, and health. TCF operates 1,600+ primary and secondary schools in urban slums and rural communities of Pakistan and serves more than 240,000 students, roughly equal to the entire primary and secondary school age population in Trinidad and Tobago. CERP collected phone survey data from a sample of 1,200+ TCF households. The first-round survey was conducted between June 3, 2020 and June 17, 2020. The full report can be accessed here, and the anonymized data is available here.

What did we learn?

Lesson 1: Unequal access to distance learning means many children are going back to school unprepared. Strategies for remediation are urgently required.

While schools were closed, 66 percent of surveyed households did not use technology (TV or mobile) for learning at all. Overall, 23 percent of respondents report children watching the government’s distance learning channel “TeleSchool,” which provides each grade one hour of curriculum per day. Restricting the sample to only respondents with a TV, 35 percent are watching TeleSchool. This is slightly lower than results from a similar survey in Bangladesh, where half of students with access to government-provided TV learning programs choose to access them.

Differential access by wealth is stark. Richer households are 55 percent more likely to use technology for learning compared to the poorest households. This pattern appears across many countries. For example, a survey in the UK by the Sutton Trust finds income disparity in access to online distance learning: 30 percent of relatively wealthier households are participating in live online distance learning compared to 16 percent of pupils from lower-income households. Similar disparities emerge when looking at households’ engagement with children’s learning.

As children go back to school, mitigating the learning loss, particularly for the most marginalized, should be a key priority.

Figure 1. As expected, richer and more educated households are more likely to use technology for distance learning 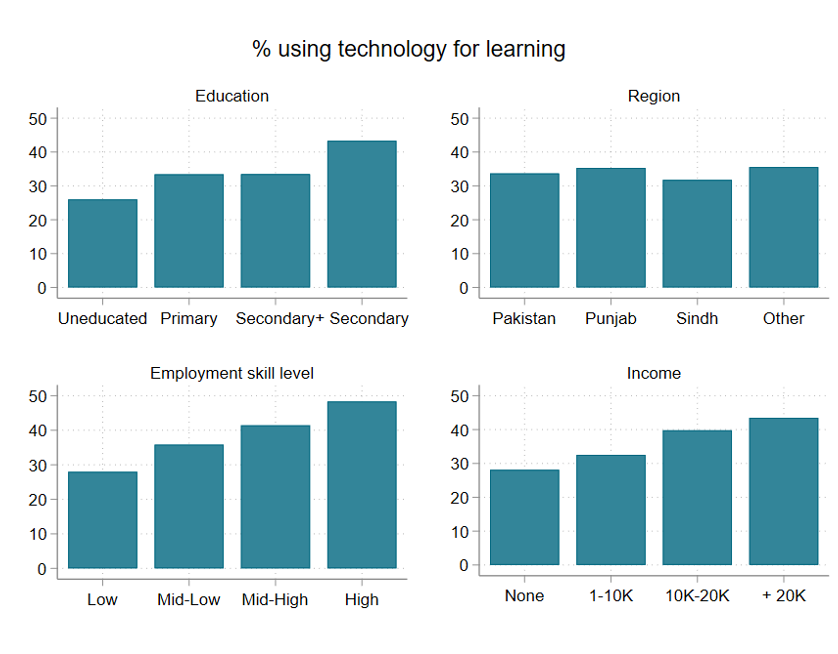 Lesson 2: Over half of the respondents report a reduction in income, and one-fifth report being food-insecure during the lockdown period

More than half of the respondents report a reduction in income and one fifth report being food insecure in the first week of May 2020, during the lockdown. In response to COVID-19, the Pakistani government announced an emergency cash assistance program to provide 12 million families Rs. 12,000 ($77) per month for four months under its targeted unconditional cash transfer program, Ehsaas (also formerly known as BISP, the Benazir Income Support Program). Yet only one fifth of the respondents that reported a reduction in the number of meals consumed say that they are being covered by the federal government’s cash transfer program. This finding implies that the government should consider expanding coverage of Ehsaas program to include other needy beneficiaries to temper the economic impacts of the crisis.

Figure 2. A sizable proportion of respondents have reduced both the number of meals and their sizes, and only a small fraction are covered by the government’s cash transfer program 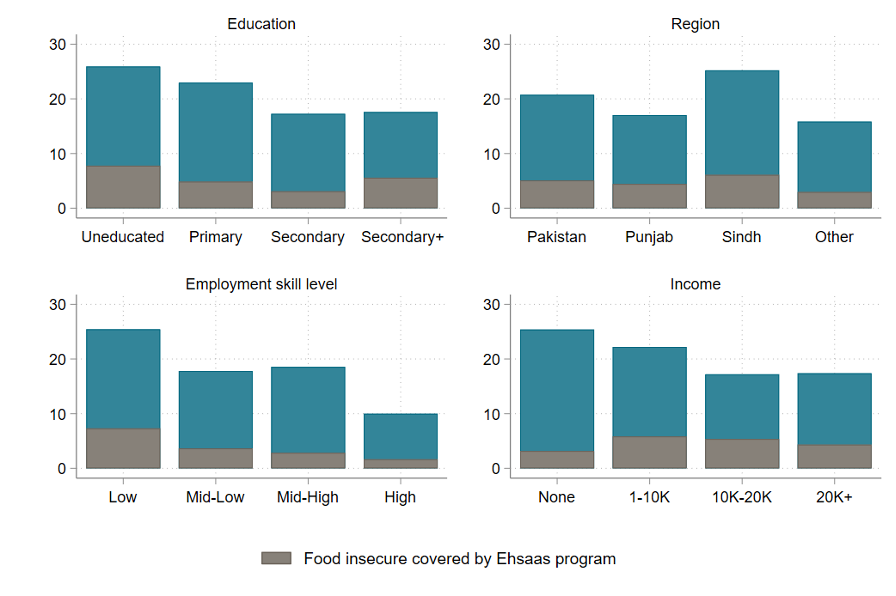 Note: The y axis shows the percent of respondents reporting reduction in meal sizes and numbers, and percent of food insecure households covered by the Ehsaas program. All graphs refer to the respondents’ education, region, employment skill level, and income. Education and provincial graphs based on 1,202 respondents. Income graph is based on a sample size of 968 respondents and employment skill level graph is based on a sample size of 994 respondents. Income figure is the respondent’s self-reported pre-COVID-19 weekly income and excludes students, teens with no occupation, housewives, and women with no occupation (likely to be housewives). Respondents’ skill level is from job classifications by the Pakistan Bureau of Statistics. Due to the small number of observations from AJK, KPK, and Balochistan, the provincial breakdown compares the national average, the two biggest provinces, with the remaining provinces included in “Other.”

Lesson 3: Most respondents underestimate the risk of contracting COVID-19

Figure 3. A majority (71 percent) believe it is impossible for them or someone in their household to contract either COVID-19 or tuberculosis (TB) 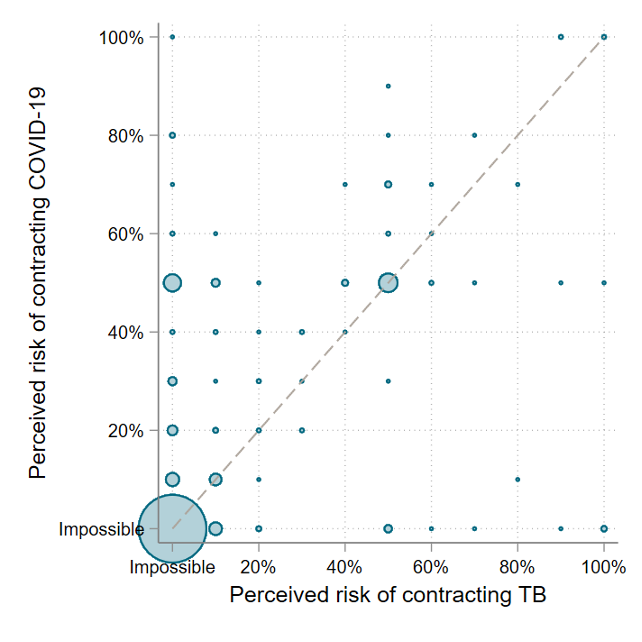 Note: Graph is based on a sample size of 1,199 respondents. Bubble size represents the number of respondents in that coordinate, dash line represents similar associated risk of infection for both COVID-19 and TB.

Responding to the findings

CGD shared the findings of the report with TCF so that they are able to respond to them. As TCF reopens its 1,600+ schools across the country, its plans reflect the lingering educational, economic, and health impacts of the crisis. It has reduced syllabus coverage for this year and built spaces in the lesson plans to focus on basic concepts, usually around literacy or numeracy, to ensure opportunities for learning remediation and catch-up after prolonged school closures. Syllabus coverage will also be adapted for the next academic year to ensure most students are provided sufficient support when progressing to subsequent grades. TCF also plans to continue producing an edutainment magazine, an initiative founded during school closures, focusing on foundational literacy, basic mathematics, and social-emotional learning beyond school reopening.

On the economic front, given the financial strain experienced by many families due to COVID-19, TCF is exploring options with parents for feasible financial contributions in line with the family’s economic circumstances.

Lastly, given the health impacts of the crisis, TCF plans to realign its priorities to balance academic learning with physical and emotional wellbeing. It is incorporating a dedicated weekly time period during school focused on students’ physical and mental wellbeing, and plans to incorporate similar fortnightly “staff circles” in the school timetable to address staff well-being and peer support.

We just completed the second-round survey, following up with the same households right before schools started a phased opening on September 15, 2020, including some questions on basic numeracy to estimate learning loss and recovery. Those results will be published soon. We plan to follow up with the same households again in November after children have been back in school for more than six weeks.