As economic indicators deteriorate, the Tanzanian government has jailed an opposition leader for questioning the Bank of Tanzania's growth statistics. It's time for the World Bank and the IMF to speak up. If it's illegal to question a government's statistics, why should anyone trust them?

I am free, to report to police next week. Comrades, as you have been properly updated by the party, I was arrested by police at home around 6 in the morning. Charged with sedition at Chang'ombe police station based on the speech I gave at Mbagala. And charged with cybercrime and statistics offences based on the economic analysis I presented to the party central committee and later made public. Statistics act is being used for the first time since enacted. Let us test it in court.

One of the crimes Zitto allegedly committed was to question the GDP growth numbers published in the Bank of Tanzania's quarterly report. The central bank says the Tanzanian economy grew at an annual rate of 5.7 percent in the first quarter of 2017. Zitto argues that this is implausible given the Bank of Tanzania's own reports about the collapse of money supply growth since 2016, and calculates—with some bold assumptions we’ll revisit below—that the true GDP growth rate may be closer to 0.1 percent.

Five Charts That May Soon Be Illegal in Tanzania (Washington Post)

As a former advisor to Tanzania’s National Bureau of Statistics, and someone who has conducted polling and RCTs in Tanzania as an independent researcher, I wrote back in 2015 when the new statistics law was proposed that it appeared to criminalize a broad swath of academia and civil society.

I asked Aidan Eyakuze, executive director of the Tanzanian civil society organization Twaweza, about this, and he noted that after the bill passed the National Bureau of Statistics clarified that the act "does not prohibit any agency or person from conducting their own research"—which Twaweza does frequently. Indeed, the final text of the act limits the criminal offense to anyone who "publishes or communicates official statistical information which may result in the distortion of facts" (p. 25, para. 5, emphasis added). That's good news, but that last phrase is a little vague.

Unfortunately, the charges against Zitto Kabwe show that the government interprets that phrase to prohibit not just lying about, but even merely disagreeing with the Bank of Tanzania's statistical findings.

If that's the bar for breaking the law, count me guilty. I've previously questioned official statistics quite openly, noting that for years the National Bureau of Statistics' official inflation rates appear to have been significantly underestimated. For that matter, note the massive, unexplained revisions to GDP growth figures from one quarter to the next in the Bank of Tanzania's own reports (see graphs below). Maybe the Bank of Tanzania is guilty too.

Any application of the law premised on the infallibility of official statistics in Tanzania is a recipe for selective, politically motivated enforcement, which we're now seeing.

So what did Zitto actually say? And is he right? His main critique is that government policy is leading to a decline in investment and slower growth. His narrower technical claim is that the GDP data is wrong. That claim is based on something called the quantity theory of money. It stipulates that the growth rate of real GDP should be equal to the growth of the money supply minus the inflation rate.

He notes that this relationship used to hold for Tanzania, but recently broke down. The growth of the money supply collapsed in 2016, while inflation and growth were fairly steady. It literally doesn’t add up. So either the theory is wrong or the data is wrong. 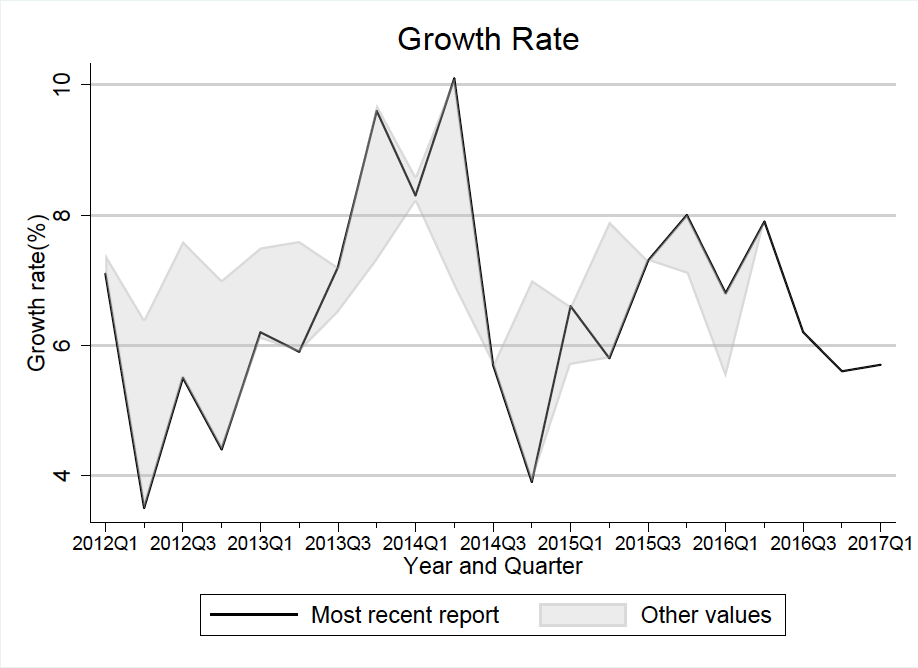 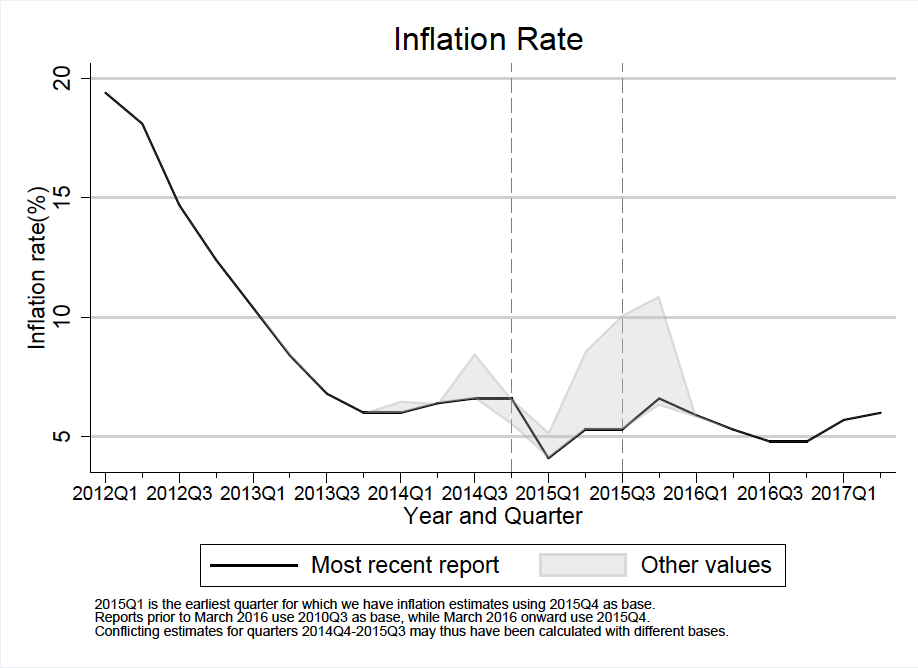 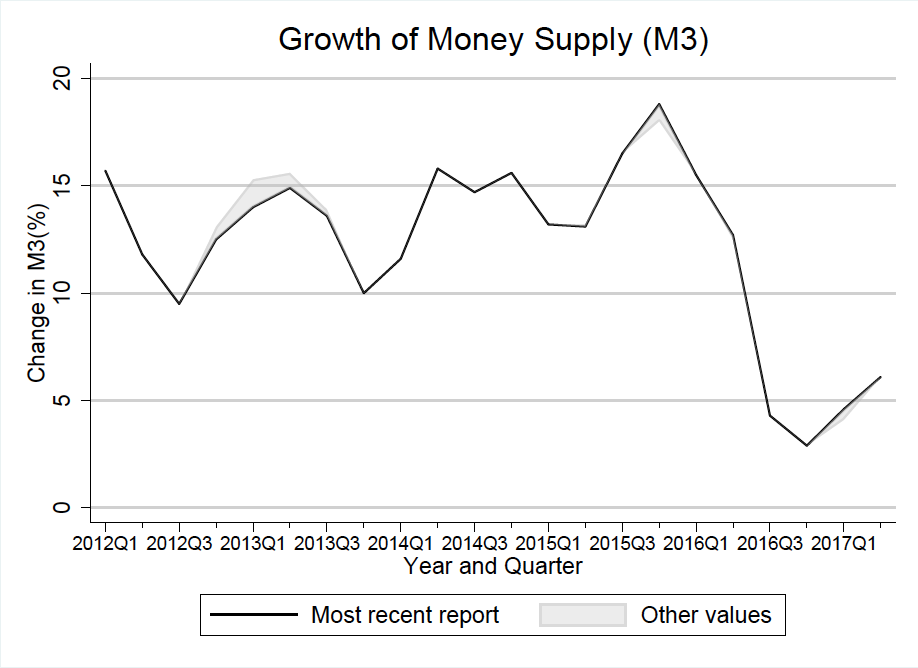 Figures based off data from quarterly Bank of Tanzania Economic Bulletin

Personally, I would side with the data. The quantity theory of money is not an accounting identity. It assumes no change in the velocity of money, which need not be the case. So it seems a little hasty to assume growth has fallen that far, that quickly. But that’s not the end of the story.

I emailed Chris Adam, an economics professor at Oxford University who has worked extensively on Tanzania's macro economy, and asked for his reaction to Zitto’s Facebook post. He has “no reasons to believe [the growth figures] are way out of line,” he replied by email.

But the really big issue is what Zitto’s numbers do point to, namely the astonishing decline in domestic credit to the private sector (and the public sector), which in turn is reflected in the sharp slowdown in M3 growth… This is pretty worrying – the growth of real credit to the private sector from the banks has been essentially zero since about mid-2016… I remain concerned that this is a leading indicator on investment and that while growth has remained reasonably robust to date we may see the consequences a bit further down the line.

Again, that last line is effectively Zitto's point. And it’s hardly news. Several months ago the World Bank was already issuing the same kinds of warnings that just landed Zitto in jail.

Imagine the scenario: next month the Bank of Tanzania announces something truly preposterous, like Chinese-style double-digit economic growth. Everyone would know it was a lie, and that the Bank was covering for the government. But under the current interpretation of the law, media wouldn’t be able to say anything. Opposition politicians wouldn’t be able to question the numbers. Outwardly, everything would look and sound… well, exactly like it does now.

There's no reason to believe the Bank of Tanzania or the IMF, who helps check the growth statistics—endorsed Zitto Kabwe's arrest. But at this point, their silence as critics are jailed feels awkwardly close to complicity.

The Bank of Tanzania as well as the World Bank country director and IMF resident representative should let it be known that official data is fallible—even if not necessarily wrong in this instance—and that they welcome free, open debate of all the Bank of Tanzania’s policies and publications. They will object that this is sullying themselves by getting involved in democratic politics. But that misses the point. Free and open debate is not only vital for Tanzania’s faltering democracy, it’s also indispensable for good macroeconomic governance. If it remains illegal to tell the emperor he has no clothes, we'll never really know if he's naked.

Graphs based on Bank of Tanzania quarterly reports, various months. I’m grateful to Mallika Snyder for research assistance with the data.