The Center for Global Development hosted our second roundtable of African finance ministers and central bank governors during the 2019 Annual Meetings of the IMF and World Bank a few weeks ago, focusing this time on tax concessions. We chose this topic after participants at our first roundtable, in April, observed that powerful individuals and corporations managed to stay out of the tax system, partly through tax concessions. During our recent roundtable, participants concurred that the fiscal costs of these concessions—known as “tax expenditures” because they transfer resources to the public through the tax system without parliamentary oversight—have narrowed the tax base and complicated the tax system, thereby undermining the ambitious targets for domestic resource mobilization set under the Addis Ababa Action Agenda for development for financing Sustainable Development Goals (SDGs).

Tax concessions take several forms. Income generated in a region or sector may not be taxed or taxed at a reduced rate. Taxpayers may get targeted allowances to lower their tax liability, or defer payment of taxes, and/or receive exemption from payment of import duties or taxes (such as the VAT) on domestic production. In a given country, multiple ministries and agencies may be involved in granting tax concessions. For example, ministries of petroleum, investment, industry, and tourism may grant tax concessions without coordinating with the ministry of finance. This implies that the ministry responsible for overall macroeconomic management lacks a complete picture of the magnitude of tax concessions in the economy.

Because donors do not pay taxes on aid-funded projects, a country’s dependence on foreign aid influences the size of its tax expenditures. The cost of these concessions has been estimated to be as high as 3 percent of GDP, depending on the size of aid budget (See Caldeira et. al. Taxing Aid: The End of a Paradox, International Tax and Public Finance, 2019). During the roundtable discussion, ministers and governors from fragile states pointed out that donor dependency made dealing with tax expenditures particularly difficult. Since they rely on sizeable external assistance to rebuild their economies, they lose significant amounts of revenue through nontaxation of project aid when their overall tax-to-GDP ratio is lower than 15 percent of GDP. Even in countries such as Senegal, tax concessions granted to aid-funded projects totaled 10 percent of all tax expenditures in 2014. These exemptions are on top of those granted to diplomatic missions under the Vienna Convention on Diplomatic Relations of 1961, which could be viewed as another source of tax expenditures. 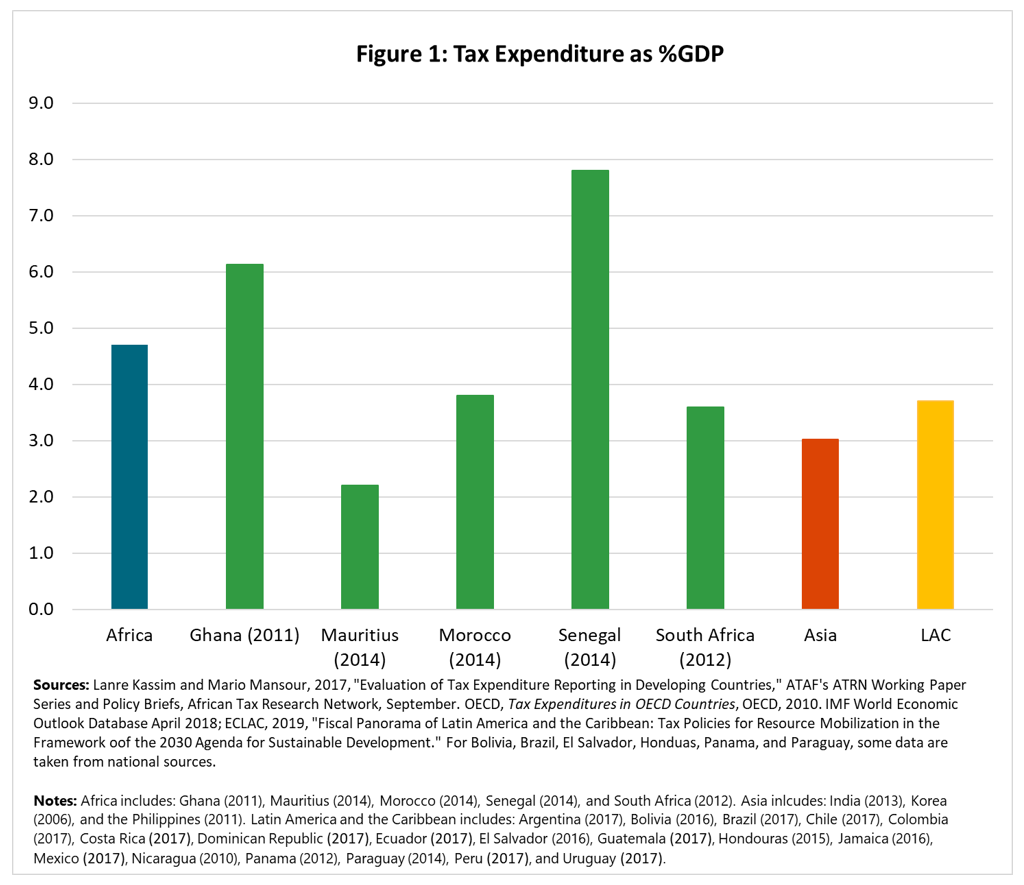 The nontaxation of project aid is inconsistent with the donor policy of encouraging developing countries to mobilize more domestic revenues. It tends to foster a culture of exemptions in the economy, besides complicating the administration of taxes and increasing the risk of fraud and corruption. Tax exemptions are particularly harmful to the functioning of VAT as they break the payment-deduction chain and favor imports at the expense of locally produced goods and services. This is contrary to the policy of aid-receiving countries to promote growth of domestic jobs. The attempt by some countries (Togo and Guinea) to record revenue losses arising from tax concessions to donors as their contribution to the project only artificially inflates the revenue performance of these countries.

Politically difficult but necessary steps for dealing with tax exemptions

The ministers observed that in several instances, they were confronted with tax exemptions granted by their predecessors and there was little they could do about them in the short run. They acknowledged that the system of granting exemptions was uncoordinated, with a large number of agencies involved in their administration. In most countries, there is no comprehensive list of tax exemptions.

The roundtable participants agreed that implementation of the following policies would require tough political choices: