Establishing consistent practice in health economic evaluations is important—to help achieve external validity and build a body of knowledge across studies and settings. Meaningful analysis also needs to align with the relevant economic and health context and connect with the perspectives of decision makers.

In a new paper, we explore the tension between these objectives with regard to discount rates applied in health economic evaluations in global health, i.e., the weights applied to costs and health outcomes further out. The choice of a discount rate can have a large influence on the results of cost-effectiveness analysis, especially if the effects—as is common in global health—extend over decades. E.g., with an annual discount rate of 3 or 5 percent, a cost 15 years out is valued 37 percent or 54 percent less than a cost that occurs immediately. Standardization, therefore, is desirable, to compare results across countries. The most common economic evaluation approaches, though, link the discount rate to the rate of growth of GDP per capita—a higher rate of growth suggests a higher discount rate because at higher incomes any additional income (or cost) are less valuable—and rates of economic growth differ across countries.

The practice on discounting in global health is indeed highly standardized and follows the recommendation of the Panels on Cost-Effectiveness. Eighty-five percent of all studies with a time horizon of at least three years covered in the Global Health Cost-Effectiveness Registry adopt a discount rate of three percent for both costs and health outcomes. 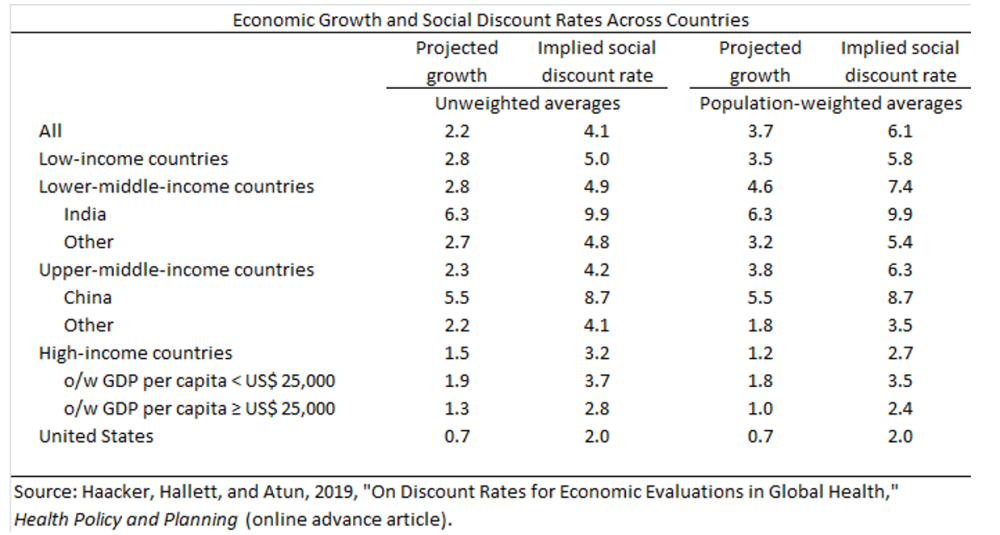 This variation in economic growth rates means that the recommendation and general practice of adopting a discount rate of three percent in global health is relevant for only a small sliver of countries (high-income countries, accounting for only about one sixth of the global population).

If standardization is the principal concern, a discount rate that reflects global realities should therefore be adopted, which could be set at about five percent (population-weighted and unweighted growth of GDP per capita across countries suggest six percent or four percent, respectively). This practice would remove a systematic source of bias in economic evaluations in global health. Additionally, in light of the sensitivity of the discount rates with respect to the rate of growth, and the large variation in economic growth rates across low-income and middle-income countries, country-specific discount rates should routinely be calibrated, and ensuing results be reported either as headline estimates or through sensitivity analysis.

Data can be found here.