This is one of a series of CGD blogs on tweaks to the SDG targets.

At their best, the UN's Sustainable Development Goals are the Rawlsian equivalent of a moonshot.  Rather than mustering human ingenuity to put a single person on the moon, the diplomats in the UN General Assembly will collectively pledge that in the 21st century, the international community has both the capacity and the resolve to end certain human afflictions for everyone, everywhere: extreme poverty, hunger, child mortality, and – if you read all the way down to target 4.6 – illiteracy. 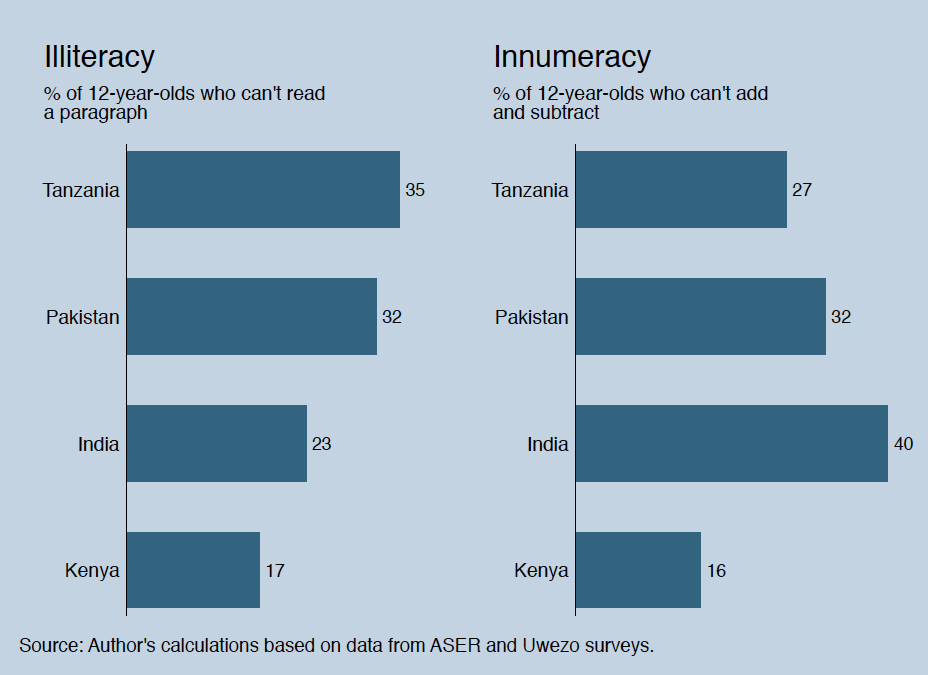 These figures underscore the gap between universal schooling and quality education — where quality is defined not just by a school building or book, or any other set of inputs, but by measurable, quantifiable progress on basic learning indicators.  The new SDGs offer a chance to shine a light on that gap, and reorient the policy conversation (at least among international types).

An added bonus of teaching all kids to read and do basic arithmetic is that it automatically addresses another important piece of the SDG agenda: inequality between genders, classes, and social groups, and the special deprivation of people with disabilities.  The beauty of a 'zero goal' (i.e. zero illiteracy and zero innumeracy) is that it applies to everyone, and prioritizes progress at the bottom of the distribution.

Compared to the clear and compelling case for universal literacy, the language in the current SDG draft is muddled and evasive.  The draft text of the education goal can basically be divided into statements that are (a) too vague to be enforced, (b) too ambitious to be remotely realistic, or (c) that simply confuse means and ends. (See my color-coded markup of the draft SDG text here).

To be morally serious, these goals must be achievable. For many UN member states, universal secondary education is simply not achievable by 2030, and pursuing this as a target is likely to be highly inequitable.  A good start would be to scrub the word "secondary" from the universal completion target in 4.1 so it reads “by 2030 ensure that all girls and boys complete free, equitable and quality primary education leading to relevant and effective learning outcomes.”

To be useful guides to policy, the goals must also be measurable.  This is where the current draft fails most.  Vague phrases like "life-long learning opportunities" offer no measurable targets to guide policy efforts, or any hope of knowing if we've succeeded or failed come 2030.

The universal literacy and numeracy target in the current draft is measurable, and with considerable effort, achievable.   Succeed or fail, the distributional implications of an international effort to tackle illiteracy and innumeracy would be highly progressive (unlike the risks of investing in, say, a failed tertiary scholarship program), and the promise of a clear, objective target opens up the possibility of transparent accounting for results.  The UN would do well to elevate this target from an afterthought (currently target 4.6 out of seven) to the top of the list, or—even better—to the level of the main goal.