Ripple Effects of the Drug War: New Research on the Transnational Effects of Antinarcotics Policy | Center for Global Development | Ideas to Action Skip to main content

Ripple Effects of the Drug War: New Research on the Transnational Effects of Antinarcotics Policy

Deadly violence in US neighbors has once again grabbed Americans’ attention. An unprecedented wave of Central American children has been arriving at the Southwest US border this year, often fleeing gang violence linked to the narcotics trade. Many of them come from Honduras, an epicenter of the Drug War with the world’s highest homicide rate.

What has caused murders to surge in this region? Drug trafficking need not spark violence by itself. Morocco and Turkey, for example, are major centers of the global illicit drug trade but have very low homicide rates—as Alejandro Hope has pointed out.

We might learn from the experience of Mexico, where homicides tripled from 2007 to 2010. Why and how did that happen? A ground-breaking new CGD working paper by Juan Camilo Castillo, Daniel Mejía, and Pascual Restrepo suggests that some of it may have been a ripple effect of policy more than a thousand miles away. This paper is one of the first to rigorously demonstrate such a transnational effect of antinarcotics policy. It’s an early product of a new CGD study group I lead, called Beyond the Fence.

The explosion of murders in Mexico stands out in the figure below, adapted from the paper. The dashed line is the homicide rate reported by Mexico’s National Institute of Statistics (INEGI): 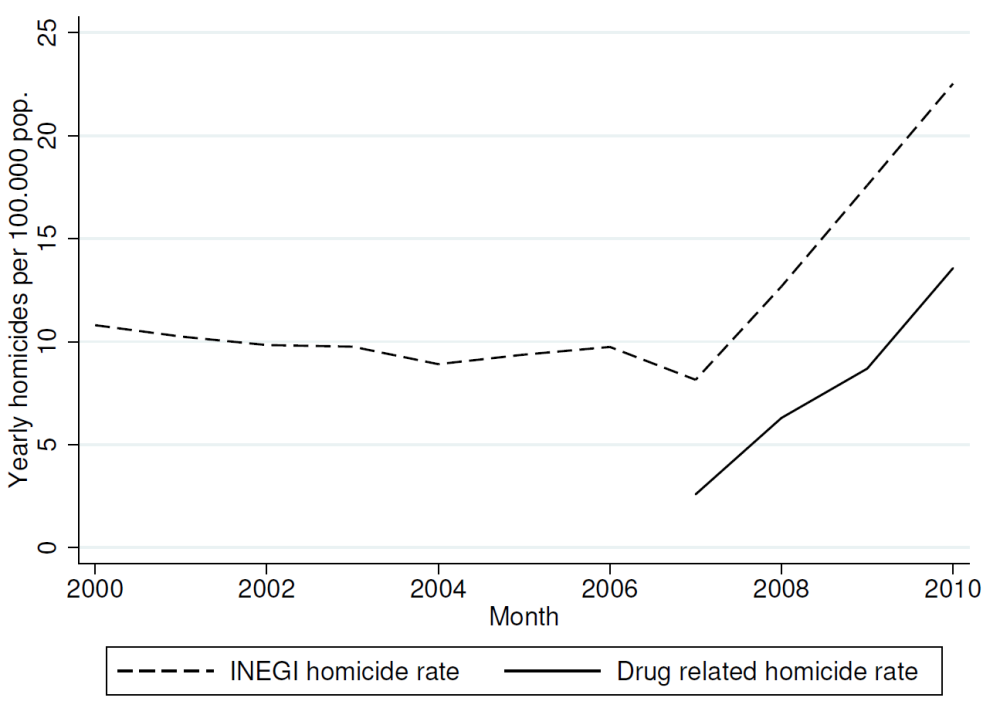 In the standard narrative these deaths arose from a new phase of the Mexican drug war. They coincide with a series of attacks on drug cartels ordered by the then-president of Mexico, Felipe Calderón (Dec. 2006–Dec. 2012). Indeed, rigorous research by Melissa Dell of Harvard has revealed links between Calderón’s crackdown and the increased level of drug-related violence.

How are they linked? One link is intuitive: when the cartels are attacked they not only fight back but are also more likely to fight each other—in turf and succession battles as prior power structures are disrupted. Another important link is less obvious: attacks on cartels interrupt the supply of illicit drugs, raising prices, and thus raising the rewards to killing for control of drug supply routes. Usually these two things happen together, so they’re hard to disentangle.

The new CGD paper teases them apart by tracing the effects of anti-cocaine policy in one country—Colombia—on violence in a different country: Mexico. Anti-narcotics efforts in Colombia wouldn’t directly spark drug-related violence in Mexico via the first link but could raise international drug prices, thus indirectly fostering violent conflict via the second link.

Here’s how Castillo, Mejía, and Restrepo demonstrate that this is in fact what happened.

They begin by measuring the response to negative supply shocks—basically high-frequency data on cocaine seizures in Colombia. The analysis finds that negative monthly shocks in the supply of cocaine from Colombia caused an increase in the overall number of homicides in Mexico. This relationship is stronger in locations that are close to crossings in the US-Mexico border.

This is clear in the next figure, also from the paper, which shows how a reduction of 10 metric tons in the monthly supply affects violence in Mexican municipalities located at different distances from the US border. The vertical axis shows the percent increase in violence caused by a 10 metric tons fall in the Colombian supply of cocaine during one month. The horizontal axis plots the distance to the nearest entry point from Mexico to the US.

These effects are large. They imply that negative shock to Colombian cocaine supply between 2006 and 2009 can explain roughly 20% of the increase in overall homicides, during the same period, in the Mexican municipalities closest to the US. 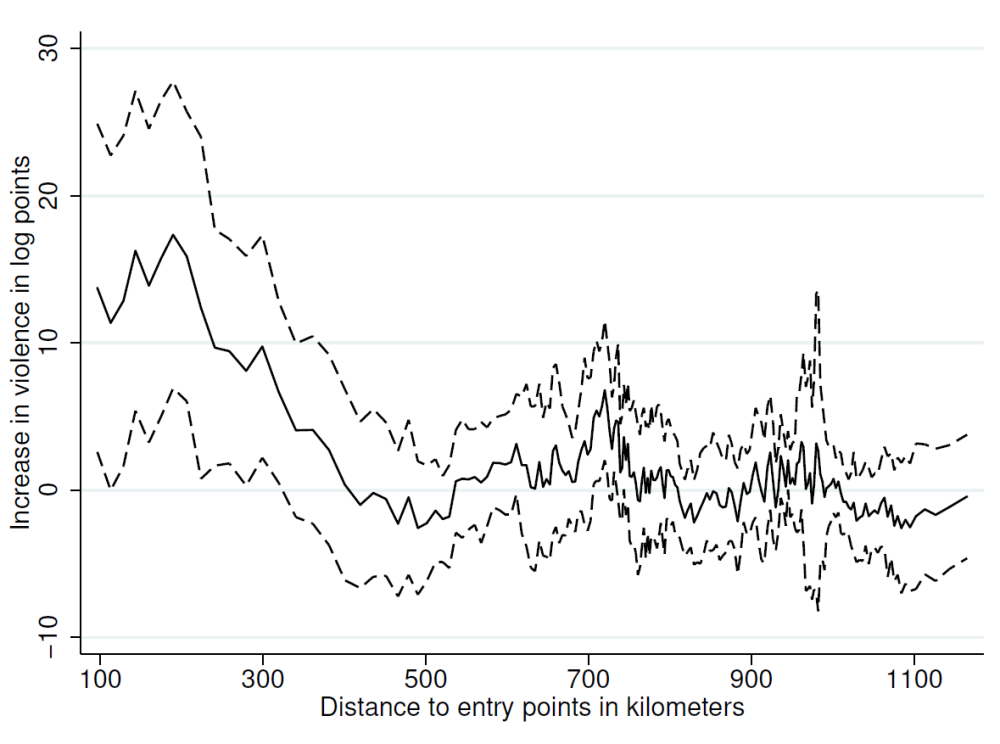 The ripple effect from Colombia likely interacted with and reinforced the effects of Calderón administration policy in Mexico. The paper measures how the response of violence in each locality depends on the historical support for Calderón’s party (PAN). The collaboration between the federal and the local government is stronger in places that have historically voted for PAN, leading to more effective action against cartel leaders. The results confirm that negative supply shocks cause larger violence increases in places with more historical PAN support. And supply shocks have little effect on violence when no cartel or only a single cartel is present; but violence soars when two or more cartels are present, especially when they are established enemies.

This research offers some of the first rigorous evidence that drug war policies in one country can have major ripple effects on violence in other countries. I hope that this research and related work contribute to a broader understanding of Colombian and Mexican antinarcotics efforts—both of which receive large support from the US government. Other new research by the Beyond the Fence Study group is here, and more is coming over the next few months. 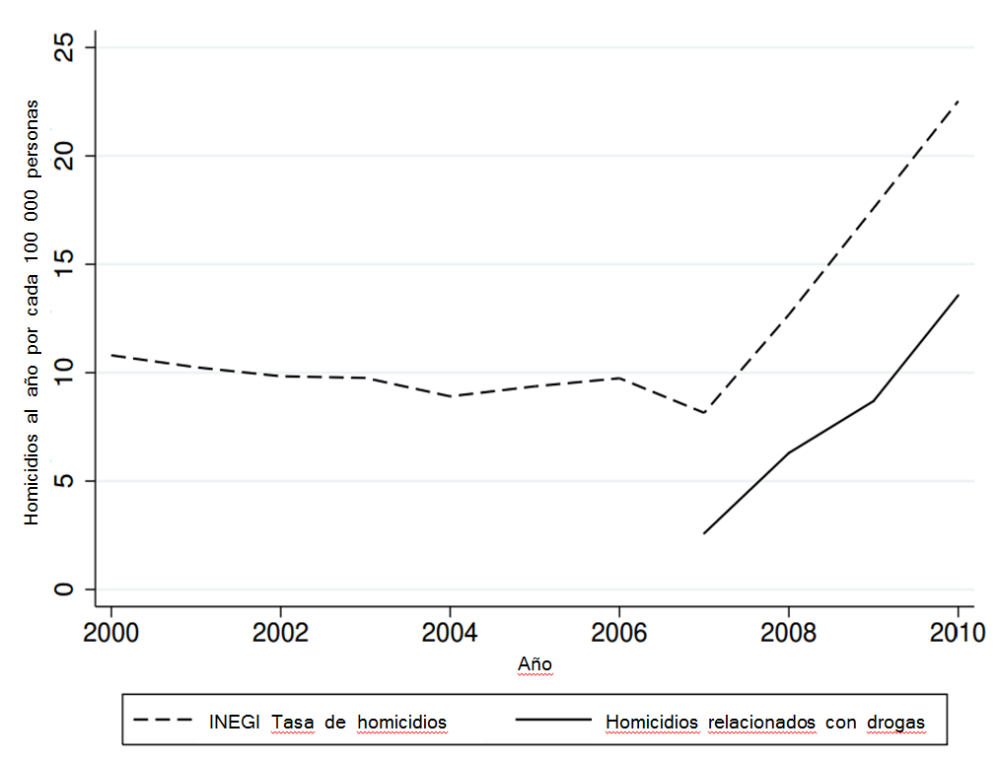 Here’s How a UN Insider Wants to Reform the Humanitarian System
Masood Ahmed
May 17, 2022