Results-Based Funding in Health: Progress in Poorest Communities in Mesoamerica 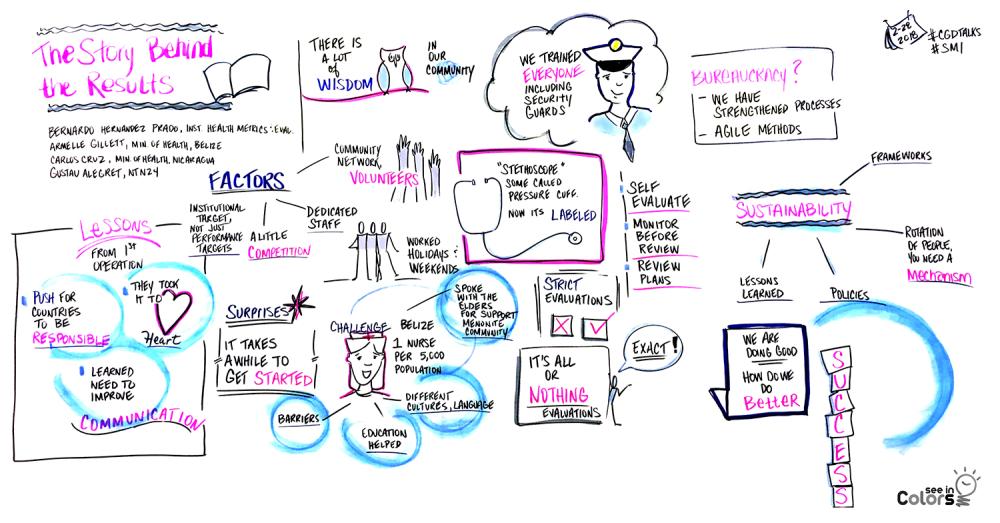 A graphical depiction of the discussion, created during the conference. (Click to enlarge.)

Early this month, CGD co-hosted a conference with the Inter-American Development Bank (IDB), highlighting progress, challenges, and lessons learned from the first phase of the Salud Mesoamerica Initiative (SMI), a seven-year-old results-based funding (RBF) partnership between donors and national governments in health. Uniquely, the event brought together country governments, external funders, intermediaries, and evaluators—from different stages of the program—to discuss motivations, results, issues, and lessons learned. [Disclosure: I (Amanda) participated in the design and initial funding arrangements for SMI as lead of the IDB team, but left for CGD just after the initiative was launched in 2010.]

RBF can be hotly debated. A recent BMJ Global Health paper argued that RBF is a potentially destructive donor fad. In contrast, a 2011 paper described RBF as a lever for health systems change. Evaluations emerging from RBF programs financed by the Health Results Innovation Trust Fund at the World Bank are mixed in terms of results (8/33 programs have reported so far). The details of design, the context in which the intervention operates, and the quality of implementation all seem to matter for effectiveness (see here).

But underlying the debates, there is a core problem that RBF is attempting to fix, and that any budget or payment mechanism in a health system must address—what economists call the principal-agent problem: weak accountability relationships, divergent goals, and asymmetric information between funders (a health care payer or commissioner, or a national government) and those charged with healthcare provision (a provider group, or a subnational government, for example). RBF solves some of these issues by creating a contract between the parties in support of a shared goal, attaching money to progress on a few results that are straightforward to measure independently, and disseminating results to everyone involved and the public at large. Funders can be central governments or external donors, and recipients can be subnational governments or provider groups.

SMI took on a version of RBF that established a contract between external funders and central governments’ ministries of finance, with the aim of improving service readiness, coverage, and outcomes in the poorest municipalities in Central America, where responsibility and budgets for health were owned. What have we learned?

Based on a natural experiment in El Salvador, Pedro Bernal and his colleagues found that clinics in SMI communities offered nearly double the number of services than control community clinics that received an equivalent amount of money through a traditional budget. According to Bernal, similar patterns appear in Belize, Honduras, and Nicaragua.

In SMI communities, service readiness and coverage increased a lot

Using case and control communities and a large sample of facilities and households, the University of Washington’s Institute for Health Metrics and Evaluation (IHME) reports 36-month follow-up results, finding that SMI increased both service readiness according to countries’ own protocols as well as coverage of key women’s and maternal health interventions. According to Ali Mokdad of IHME, regions targeted by SMI have seen more babies delivered by skilled attendants, more women accessing antenatal appointments, and more families consuming healthy diets as compared with baseline household and health facility data from 2011. Although more work is still needed to achieve results on other indicators, these initial results suggest that the RBF-plus model has significantly improved performance.

In SMI, country ministries of finance and health and IDB project teams, supported by the SMI’s small secretariat, negotiate a set of policy goals at the national level (new protocols or norms, for example) and a set of health coverage and service readiness goals to be achieved in the poorest fifth of municipalities in the country, building off a baseline survey. Country governments contribute 50 percent of the funds required to meet goals, and the Bill and Melinda Gates Foundation and the Carlos Slim Foundation—via the IDB—put up the other half of the required resources.

If countries meet goals, SMI provides governments with a financial return equivalent to 50 percent of their original contribution. Ministries of finance may or may not decide to “trickle down” financial incentives to communities, but most have passed on funding to municipal governments or health authorities to meet goals. All funding is on-budget, meaning that government oversees and manages expenditure uses, as well as audits and accountability using their own structures. IHME carries out the independent data collection, analysis, and verification that certifies whether countries have met goals, and this external measurement—in combination with the RBF—was a catalyst for change.

SMI was undertaken by an existing regional group of country governments in Central America (COMISCA). Participants reported “healthy competition” amongst countries and municipalities within a country because of the measurement of results and the pass/fail certification in every measurement period. There were multiple opportunities to get it right, so even if a country “failed” at the first measurement, there was another chance to get it right, and most did. Some governments preferred the idea of payment for progress in lieu of all or nothing, but most liked that the scheme raised the stakes for doing well in the poorest, historically neglected communities in their countries.

…but it wasn’t only the money and measurement

SMI describes itself as “RBF plus” because the initiative also offers intensive consulting and analysis alongside the formal agreement and measurement. Policy and protocol updates, supply chain support, and information systems and app development was part of the secret sauce, as was a qualitative and ongoing evaluation and learning process on top of the quantitative measures.

Would it work elsewhere?

When I started working on SMI, GDP per capita in Honduras was about the same as it is in Ghana today. I see many parallels between the highly decentralized health systems in Central America and health systems in Ethiopia and Nigeria, including in the huge differentials in public spending by states. While human resource capacities and distribution are certainly different at baseline, I see no important reasons not to test a SMI-type approach in cooperation with the governments and regional bodies in other parts of the world. SMI is different from the idea of paying providers directly, but still retains the positive incentives for population coverage of key health interventions. And it is a less-cumbersome and more constructive way for an external funder or philanthropist to engage with public health systems.

Learn more, access presentations, see graphical facilitator illustrations, and watch a recording of the conference here. Your views are welcome.