The Relationship Between Migration and Development in El Salvador

The Biden Administration intends to address the “root causes” of migration from the Northern Triangle countries of Central America through a US$4 billion aid package. Yet while El Salvador, Guatemala, and Honduras face similar challenges, they demand distinct policy responses. This blog series, written in conjunction with academics in the region, unpacks the relationship between migration and development in each country, and provides policy recommendations to the Biden Administration as to how to best foster both.

As Special Envoy Ricardo Zúñiga traveled to El Salvador last week, the number of people arriving to the US-Mexico border from the Northern Triangle is at its highest level in at least 15 years. Among the three Northern Triangle countries, El Salvador is the least represented among those arriving at the border. Yet, the rate of Salvadorans illegally migrating to the U.S. still vastly exceeds those who use lawful pathways.

Within El Salvador, politicians are torn between discouraging irregular migration and promoting remittances for economic development. Given this dual focus, and the lack of lawful pathways to Mexico and the U.S., there is no consistent messaging in favor of safe, regular, and orderly migration. The Salvadoran government must create a national migration and development plan, with which multilateral organizations and the U.S. government can then engage.

The U.S. government must also break out of old models in addressing the “root causes” of migration. In the short-term, this demands creative policy outreach to the people who are choosing to migrate. In the long-term, this demands a contextual, evidence-based, and adaptive focus on viable economic opportunities.

Since 1950, El Salvador has been characterized by net emigration. According to the United Nations, 1.6 million Salvadorans lived abroad in 2019, 24.8 percent of the country’s total population. Such movement has a positive impact on local well-bring, including through receipt of remittances. Between 2001-2019, remittances comprised at least 15 percent of El Salvador’s GDP.

There are multiple factors that explain why people emigrate and will continue to do so, including economic need, violence attributed to gangs and the state, and endemic corruption. Since 2000, more than 80 percent of emigrants have moved to the U.S., many through lawful pathways.

Still more people have migrated irregularly. In 2019, 92,351 Salvadorans were apprehended at the U.S. southern border. And thus far in 2021, 29,141 Salvadorans have been apprehended, many of them children. Under COVID-19 protocols called Title 42, 90 percent of adults have not been allowed to stay in the U.S. and were deported to their home country.

Between January and December of 2020, the Dirección General de Migración y Extranjería de El Salvador (Salvadoran General Directorate of Migration and Citizens Abroad) reportedly received 10,725 returnees. Of those people, 74.97 percent were adult men. More than 25 percent of those deported were from just two states in El Salvador: San Salvador and San Miguel. This reflects the trend over the past few years.

Lawful pathways from El Salvador do not meet demand. In any given year between 2000-2019, at least 27 percent of people wanted to migrate in the next year. However, as Michael Clemens and Jimmy Graham note, the annual growth of young workers has recently peaked during this period of high unauthorized migration. This suggests that high emigration could be temporary, only lasting for the next 30 years.

Various Salvadoran authorities are charged with addressing migration, as dictated by the National Strategy for the Protection and Development of Salvadoran Migrants and Families (2017). The highest migration authority is a convening of over nine different government ministries, local governments, academics, and the private sector called the National Council for the Protection and Development of Migrants and their Families (CONMIGRANTES). El Salvador also joined the Central American Comprehensive Regional Protection and Solutions Framework (MIRPS) in July 2019.

A lack of national funding hinders the ability of these institutional mechanisms to fulfill their objectives. The International Organization for Migration (IOM) and U.S. Agency for International Development (USAID) have often funded local initiatives that support migrants in El Salvador. With what means they do have at their disposal, the Salvadoran authorities have been active in encouraging lawful migration through the following:

Underpinning mass emigration is the structural inefficacy of the country’s development model, which fails to meet basic welfare needs such as economic opportunity and safety.

There are critical economic disparities between Salvadoran departments (states) and municipalities that must be addressed as part of a governmental strategy to deter irregular emigration. In recent decades, El Salvador's development policy has undergone five institutional transformations. 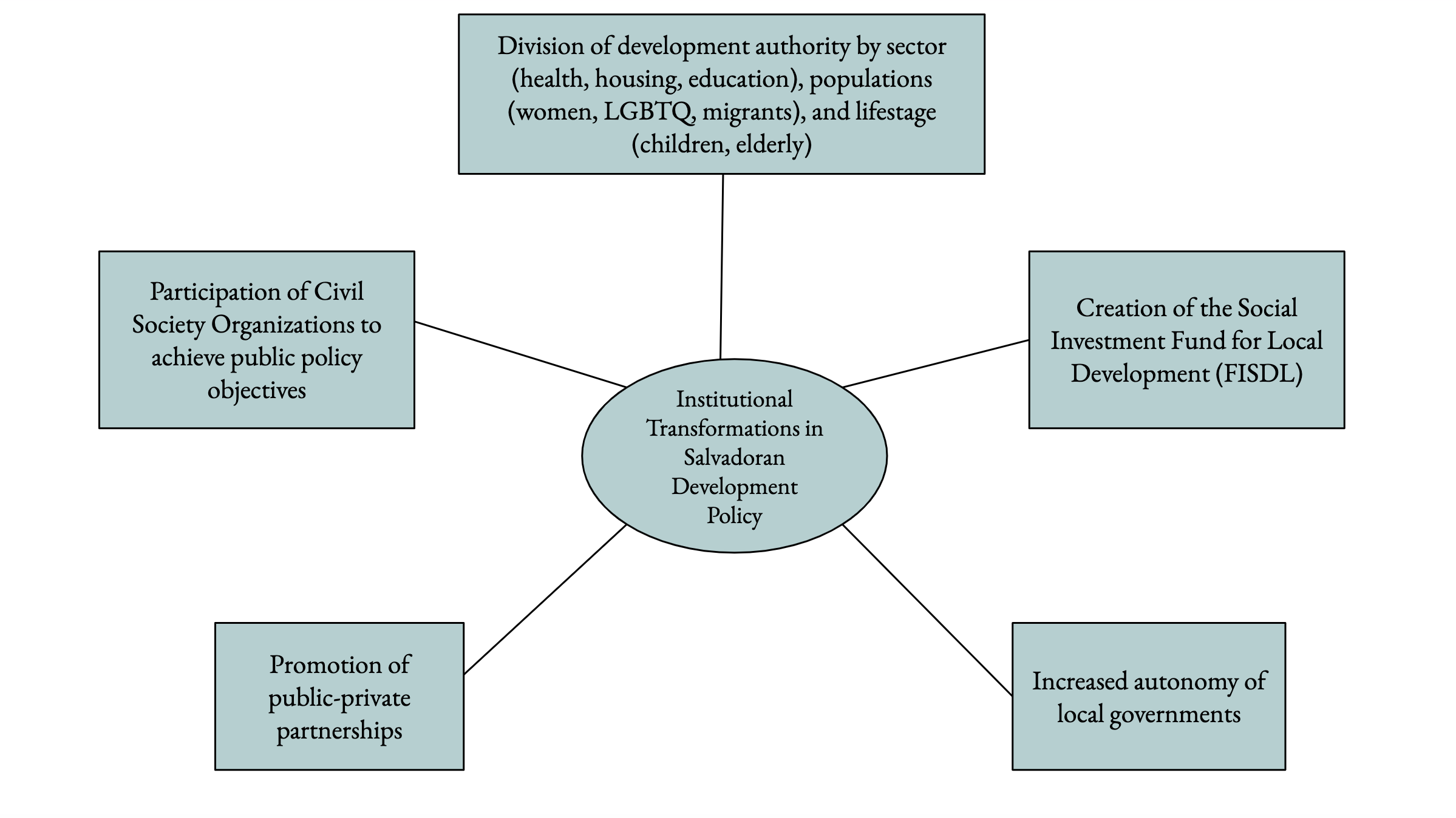 Various public entities are charged with development, but progress remains elusive. There are no long-term, interagency development objectives, making the achievement of such objectives particularly difficult. This is in addition to a lack of coordination, lack of funding, prevalence of corruption, and dearth of highly disaggregated information for analysis.

Improving incomes and security requires more efficient institutions—institutions that are consistent across Salvadoran departments. Argumedo and Zuleta (2018) show that municipalities with the highest performing economic indicators interestingly receive the highest levels of funding from the Fund for the Economic and Social Development of Municipalities (FODES). Regions with the poorest performance receive the least funding, suggesting distribution of development funds is not based on need. Consistent with a recent report from the Salvadoran Foundation for Economic and Social Development (FUSADES), equitable distribution of FODES must be prioritized, as it serves as the main transfer from the central government to local governments.

Further, it is critical to strengthen the Ministry of Local Development created in 2019, adopt an equitable long-term vision, improve the dialogue mechanisms between different levels of government, and introduce evidence-based interventions into ongoing development initiatives.

International cooperation, as a complementary recourse to national funding, needs to be consistent with such institutional priorities to ensure a lasting resolution to irregular migration.

In a recent interview with Tucker Carlson of Fox News, Salvadoran President Bukele cited economic policy and security as the two main reasons why people flee his country. The US strategy has historically attempted to address these two complex factors.

The Alliance for Prosperity (A4P) and the Central American Regional Security Initiative (CARSI) had mechanisms to improve economic and security conditions, including community programming for at-risk youth, infrastructure, and transparency mechanisms for public spending. For 2021 alone, Congress appropriated US$505.9 million in assistance to Central America as a whole.

Biden’s recent plan for Central America will double that. The requested assistance seems to build on the US Strategy for Engagement in Central America, for which Congress appropriated more than US$3.6 billion between FY2016 and FY2021.

Note: Does not include military assistance, including that which goes towards combating criminal groups such as gangs. Source here.

Despite the very real gains, criticisms persist about the efficacy of U.S. cooperation, as reflected in a recent report published by the Wilson Center. The authors signal that the potential of U.S.-funded programming is diminished by:

U.S. agencies significantly scaled back funding for many programs in the region less than two years into implementation due to the Trump Administration’s suspension of most foreign assistance to the Northern Triangle. As of January 2021, USAID programs in the region were reaching fewer than half as many people as they did prior to the March 2019 aid suspension.

The implicit assumption of U.S.’ foreign assistance towards El Salvador is that it will reduce irregular migration from the region and improve livelihoods at home. To achieve these objectives, USAID should distinguish between two different types of “root causes:” long-term economic and security concerns versus short-term instigations of large groups of emigrants. Recent additional funding towards the region should address both.

As we detailed above, approaching the year 2050, fewer Salvadorans will be emigrating due to demographic trends. Investments in education, skill-building, digitization, and anti-corruption will be beneficial in the long-term. These initiatives will likely raise El Salvador’s GDP and, in turn, increase emigration temporarily. Michael Clemens (2020) shows that as people achieve more, they aspire for more and often leave low-income countries seeking better opportunities elsewhere.

Yet insurance against livelihood risk can prevent unmanageable emigration immediately. Funding for social protection mechanisms that minimize adverse impacts of violence and extortion, losses in rainfall, and unemployment can offer opportunity at home right now. About 1 million people are expected to face high acute food insecurity between March and August 2021, including 121,000 in Emergency (IPC Phase 4). Many facing food insecurity are in San Miguel, one of the departments with the highest rates of emigration.

In the meantime, to channel potential Salvadoran irregular migrants into lawful pathways, the U.S. should:

Many in El Salvador are waiting for consular appointments. The U.S. Executive should allow people with approved family-based petitions (Forms I-130) into the US while they wait for their green card. The Salvadoran government has vetted potential employees eager to participate in the H-2 program. The Department of Labor should facilitate connections to employers, the Department of State should expedite consular processing, and USAID should maximize development returns among H-2 visa holders while they are home during the off-season.

2. Engage with the Salvadoran government at the municipal level.

Informational campaigns on what pathways are available have the potential to be more effective than disincentivizing campaigns, which are ineffective. Creative social media outreach, through meme Facebook pages like Hey Salvadoreño Wacha, and campaigns by celebrities, such as CNCO, can reach a wide (and young) audience. This strategy is in the U.S. Citizenship Act of 2021 and must be deployed immediately by public and private actors.

There are ways to mitigate the administrative burden at the border, but the U.S. government must get creative with countries of origin to do so. Only by doing so will the U.S. and Salvadoran governments provide the option of a dignified life such that the decision to migrate is no longer forced. 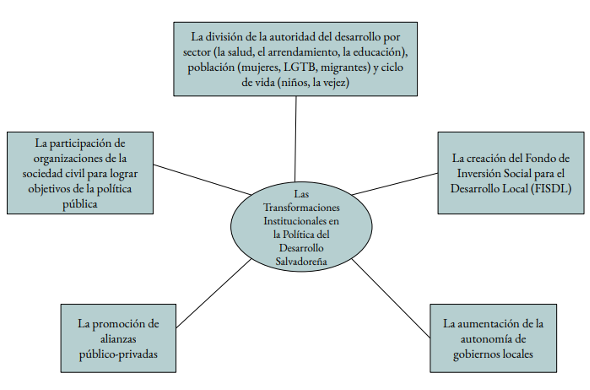